Because I now do #Facebook4Fatties and THIS (RunKeeper.com).

And because I'll add in more of this.

Well, if he had 'fast-walked' all across Greenbaugh, Alabama and the rest of the country.

And I'll likely have smaller portions of this.

But I'm too early by far for any mid-life crisis. And this isn't even a crisis.

It's a realization that if I'm working smarter not harder at the choices I have and the choices I make, I can have my cake, eat it, go for walk, and lose weight...

Case in point. My two breakfasts this weekend were as follows. 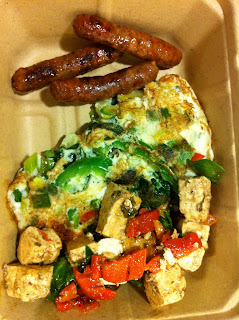 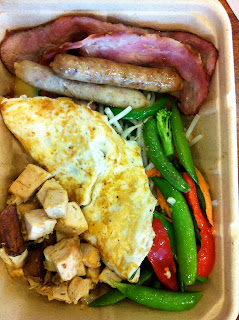 And they were GOOD.

And don't think the choices all suck. I chose to get up and do the walk this morning that allowed me to have a couple pork sausage link AND some turkey bacon. And I could've had pork bacon too. But I didn't. Maybe I will tomorrow. Who knows?
Both those breakfasts (including a skinny latte this morning) were fewer calories than the walking I'd done before them. So I'm ahead for the day. Full meal eaten and enjoyed.

I was giddy last night because I had a plate FULL of sweet potatoes. And they were SWEET, and buttery...w/o any butter...yeah, I said it. I put the butter away. Because I wanted another 1/2 cup of sweet potato more than I wanted 1/2 cup less potato and a pat of butter. Just a quick choice. Could've made the other one. Don't feel too bad for me, I had some apple juice braised pork loin chop on the plate too...

I mean, I still bought two containers of ice cream. Of course I did, how could I reach for the pint of Ben & Jerry's Mint Chocolate Cookie, see the Alden's Blackberry, and NOT grab it too? And I'll eat it too...

But I get my milk, eggs, butter, bacon, and yoghurt from a farm out in Frederick now. So the calories are more from food and less from labs. (I like traditional extension not modern experimentation. And I know that sometimes the former is still subsumed under the weight --and funding--of the latter. What? You didn't expect me to get all land-grant on you?)

And I get up and meet KayzerSoze at 7:30 on weekends on the trail for a walk. And we fill just over an hour talking about everything from our #Facebook4Fatties check-ins to the amazing massive meals we'll have in Marrakesh next year...

Shoot. He makes me custom suits. This man has a vested interest in me getting smaller. And I'm still happy to do it!!!

And yes, occaisionally I'll cut myself off of another Manhattan because while they are delicious, they are also the same value as a steak dinner. And I like steak dinners more.

Two weeks in (and about twice the weight lost as I set in my goal pace), I'm learning that half egg and half egg-white is not as much of a loss as two Manhattans and no dinner, or as no walking and also no soup with my diner dinner.  I want one Manhattan and dinner. I also want a fast morning walk with a buddy AND chicken noodle soup before my corned beef hash w/ poached eggs.

And now...I'm off to be lazy on the couch until I get up and make myself lunch. And then back to the couch and maybe stretching to do a load of laundry today until it's dinner time. And I'll still be ahead of the game today. Suckers. ;)
Posted by kitchengeeking at 11:50 AM

Go, you! It sounds like you've got a plan going that you can make work for you. You're inspiring me - I've gained a few the past month (too much wine, sweets, etc.). I've got to start walking again, too. I was wearing a pedometer for a while last year (not the coolest accessory, but it's hard to lie to myself if I wear it). Anyways, much support from up here in MA!

Great post! I keep telling myself I need to do something and not doing it; your post made me feel motivated to do some analyzing again. Yay you!

Yay both of you!!! I'm not sure these are the best apps, but they work very well for what I'm doing now. I do know that another general calorie/food one has a MUCH more easy-to-use recipe analyzer (CalorieCounter). I have found it very helpful to have the ability to enter meals throughout the day. If I had to write it all down or remember I'd forget. It also helps A LOT w/ the "Should I have another Manhattan" querries.

Erin - Thanks. I fixed the link.

Amy - I have a pedometer too and intended (but of course forgot) to bring it today and compare the pedometer to the phone to see if there was a marked difference. I also don't know that counting the normal steps is as key for me as encouraging myself to understand how the really big exercise joints help me keep eating and health-i-fying.