So I went to Miami (stayed in Sunny Isle Beach and the game was actually in Miami Gardens, but y'all don't care about that) for the Orange Bowl. And while I really was there for the game first and the food second this time...I also eat. And I don't eat like normal folk...

My room wouldn't be ready for about 2 hours and it was lunch time. North on A1A (Beach front avenue!) until I felt like turning. Headed west away from the Atlantic on Hallandale Beach Avenue and started looking. Crossed Route 1 (Biscayne Avenue down this way) and really started looking...

Saw a 'bakery,' realized it was Colombian and also looked like a restaurant. Circled the block, checked it again. Circled one more time to get the right parking spot.

Yubi Bakery. Can't find this place on Yelp, Urbanspoon, or just a simple Google search. I randomly found it. And you want to find it too. Colombian bakery and restaurant. Not a lot of tourist traffic. 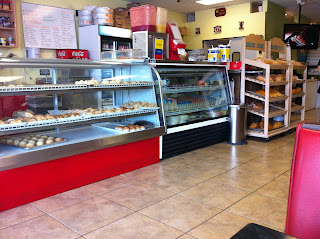 Good looking display cases of tasty pastry. If I had a sweet tooth I would have loved it.

Also had a language barrier. Which I LOVE. It means people from the place where the food is from are making it, ordering eat, and eating it. 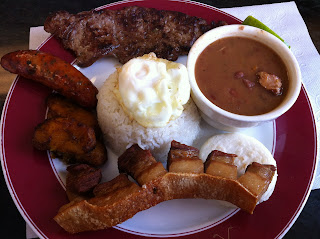 Instead, I went Bandeja Paisa because I suspected dinner would be a spotty affair after meeting up with the rest of the Orange Bowl Mountaineers later that night.

From the top and clockwise we have a thin beef steak, beans (cooked w/ cicharones), a small arepa (corn cake), a chicharone (deep-fried bacon w/ the rind!), rice w/ a fried egg on top, and sweet plantains. This is a traditional workers lunch in Colombia. The kind of worker who lifts heavy things over and over again and needs heavy sustenance.

You know, like beer bottles on the hotel patio? 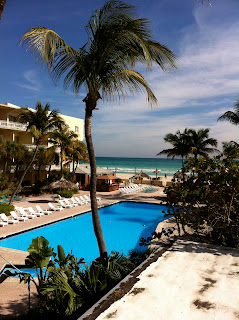 When this is your view, Corona goes down very quickly...

I'm just sayin'. Even this guy would be okay with a half a Publix sub and a piece of friend chicken for dinner. 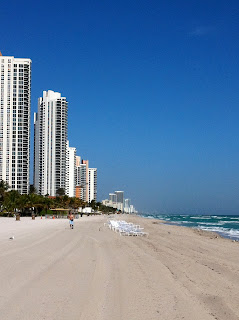 And then in the morning, after the crap hotel breakfast, there was this horrible view.

Gosh it was hard to put up with the venue for two days before the game. If only someone in the group used to live in the greater Miami area and could take us to their favorite Cuban restaurant for lunch after a slightly too-long tour of Coral Gables?

We were starving. All of us. Few of the 9 had eaten breakfast. Those who had had eaten about 10am and kept it light. And it was 2pm...and there had been beers and tequilla the night before.

Three Clemson fans were walking out as we walked in. Strange, we hadn't seen many Clemson fans anywhere all week. I guess they didn't want anyone from WV to be able to recognize them after the game...heh. Foreshadowing game snark. Love it.

So we sat at two rounds and started ordering. Starting w/ one each of Mariquitas Harry's and Tostones Guayabero. Then there was confusion about how much we ordered so we doubled it. Then people started ordering appetizers AND meals. But, knowing how hungry I was, and knowing how good Hibbs said this place was, I got a chorus going of 'just order it all, we have refridgerators in our rooms' started and we ended up with two each of the Guayaberos, Mariquitas Harry's, and Tostones Especiales. Plus there was an order of Mussels.

And I ordered Vaca Frita as an appetizer for the table so I didn't have to choose between that and the pork chunks for my entree. C'mon, the only person who had ordered vaca frita was farthest away from me at the table. I might not have gotten a taste!

Peeps can thank me for the leftovers anytime they want!!! 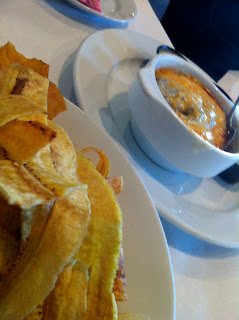 Oh, hey there appetizer of fried plantain chips with a thick sausage and cheese concoction including tomato and olives. It was a deconstructed nacho with much richer and deeper flavors than any TGIF/Applebees/Chili's/Outback/Mall Nacho you've ever had... 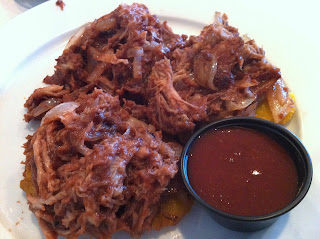 And some tostones w/ a sweet barbequed pork topping? Okay.

Tostones? They're young plantains (yellow ones that look like the bananas you do want, not the blackened skins) that are sliced and fried, then smashed and fried again.

What, I missed pictures of the ones topped w/ vaca frita (shredded sauted beef) and cheese? Darn. I got to eat one! 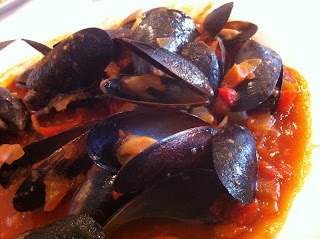 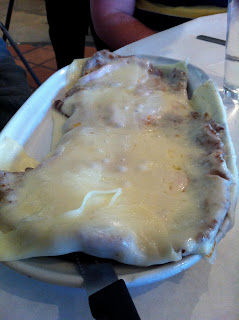 JWilli went for the Beefsteak Milanesa after seeing one delivered to one of the poor tables full of (what I expect were) Cuban-Americans putting up w/ our madness. Breaded, topped w/ a slice of ham, a tomato sauce, and a gooey, impermeable layer of cheese. We had such a good time here and later that he wasn't even mad that JS ended up snarfing the leftovers about 15 hours later! 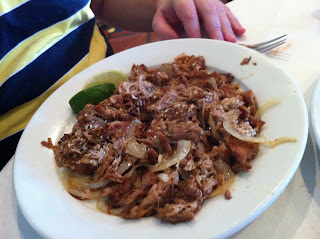 Mr. JS went Lechoncita. And I applauded him for his excellent ordering. Pork, braised and then shredded and added to the flattop for a crust. Onions in with it and a squeeze of lime on top. Some mojo sauce (citrus garlic) to boot. 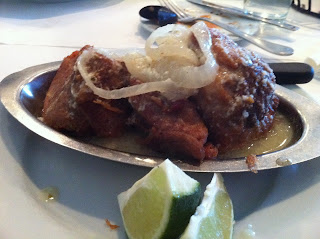 Pork Chunks. Literally. That's what it says on the English language menu. Think carnitas here. Likely cooked in rendered pork fat. It's served in a dish full of mojo. That beautiful tart citrus and garlic sauce that adds heat and tang to everything it touches!

Let's pause a moment to focus on that bit. Meat, cooked on a grill or griddle, in a roasting pan or a vat of rendered fat, and splashed w/ citrus. We should use citrus more. It accents and cuts soooooooo many types of meat in so many good ways. 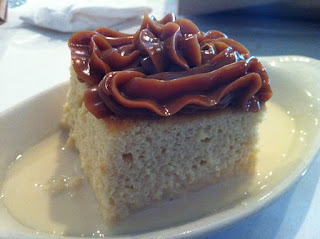 Go eat this. NOW. Like, forget the pork and order this first. Immediately. You want room for this in your belly. And then a small meal. And then another piece of this!!!

Sweet without cloying. Cake stands up to the milk sauce. Dulche de Leche is unbelieveably rich and caramel.

This was, until the beans at La Caretta a few short hours before leaving Miami, the BEST thing I ate on the whole damn trip.

Brief transition as there's a temporal void between this meal on Tuesday and the next meal on Thursday.

I will not bore you with the game here.


We dropped 70 points in the game.

In a football game.


No team in the history of bowl games, all of them, EVER, had scored that many points. 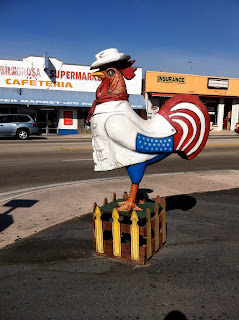 So after that collosal beatdown I needed to refuel again.

Yeah...Al. Who just moved up there from the Miami area and sent me to La Carreta in Little Havana. 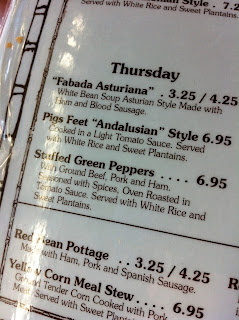 And if you know me, you know that daily specials get ordered. I thought about the Pigs Feet, but wanted more variety. So I got the soup. And an appetizer. And a combo/entree.

Don't worry, I didn't eat it all. I sampled. And took it back to the hotel for leftovers. 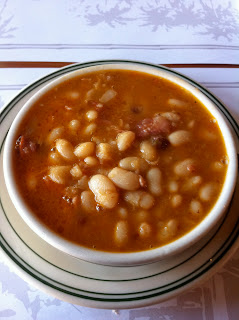 White Bean and Ham. Classic. And because it's Cuban it's White Bean w/ Ham & Blood Sausage.

So good. A rich and thick soup. 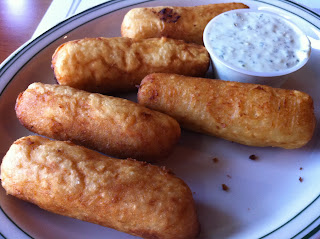 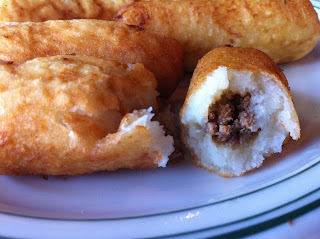 Stuffed w/ Ground Beef and served w/ a creamy dipper sauce. Not hot, not very spiced. Starch and meat. Good balance of each. 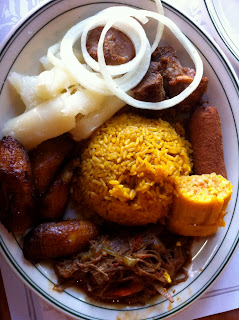 The Criollo Sampler. Natch. Top and clockwise goes boiled yuca (which gets a bit pasty on the outside), pork chunks cooked in rendered fat again (NOT a bad flavor to double up on in a trip), a croqette w/ ham and mozzarella, a tamale, ropa vieja, platanos maduros (sweet plantains), and yellow rice in the middle.

All delicious (with the already stated exception of the boiled yuca).

But the true amazement came with the dish on the side... 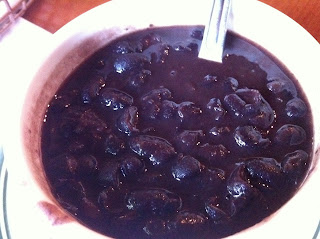 Look, Italians can do things to flour and eggs that no one else can do. The French can turn butter into brilliance. Chilis are blended to balance heat so expertly in everything the Mexican cook put onto a table.

And the Cubans know beans. They know them so well you would be a fool to pass up balck beans if you are in the presence of a Cuban. And don't even think about telling me that you want to save room for something else. I left pork cooked in its own rendered fat and ropa vieja on the plate to get at more of those beans.

There is the bean. And a perfectly seasoned juice sorrounding them. And there is a hint of garlic.

There is no other word that captures what is occuring in that small cup as well as depth. 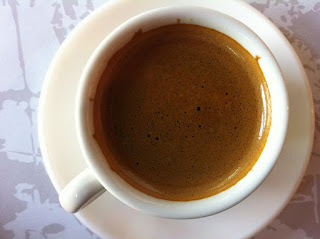 And, of course the best way to recover from that starch-fest is a Cafe Cubano. I hear tell they put a layer of sugar in between layers of coffee when they make it.

Whatever they did, it saved me from a food-coma induced wreck on 95 as I was heading back north to the hotel to rest for a few hours before some required South Florida eating.

Not Joe's because I don't feel like having to grease the palm of the matre d' to get ahead in the no reservations 'first come (heh), first served' world of the 'best' Stone Crab restaurant in South Beach. Get over yourself.


At Billy's it was "Sure we can fit you in. Just come on over." "Welcome to Billy's sir. There's a spot at the bar. Do want to wait or just eat there?"

See? If I'm dining solo, it's always worth asking if I want to eat at the bar. I don't need to take up a full table for you, and I don't want to wait for one if I don't have to. 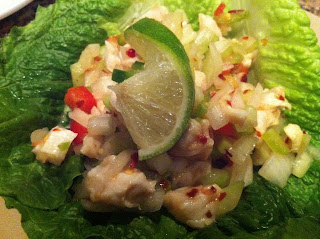 Conch salad. Tossed w/ lime and hot pepper flake, radish, and celery. Quite heavy on the hot pepper flake  in a good way. Conch had a chew to it that I like and the citrus was bright. I left a lot and the bartender/waitress wanted to make sure it was okay.

Definitely okay. I just needed to save room for this... 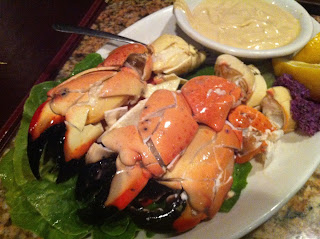 So sweet. So rich. So good.

A tangy mustard sauce on the side. A squeeze of lemon here and there.

I always laugh in FLa when people ask me if I was disappointed I had to work so hard eating Stone Crabs. Really? Stone Crabs work? Not a chance.

These larges were 5 to an order at about $45. And I have to say, for a treat yourself high-end delicacy, it was worth it. I have them maybe once a year.

Posted by kitchengeeking at 4:09 PM

Nice - I enjoyed reading about your experience in South Florida