Another DRAFT post that never had "Publish" hit. Circa 2008-9. Maybe it got incorporated into a larger thread. I don't think so...and I'm too lazy to go back and look. Karl and I have added Bogota and Cartagena, Colombia to our list of trips in addition to criss-crossing the DC Metro Area in search of full bellies. But this was a good night too...


Karl and I are partners in food. It started in Dallas (though we didn't know it at the time). The first dinner at a random tex-mex joint; his introducing me to Fat Tire beer; Rod and Karl and I sitting outside on a cool July evening in Dallas talking and eating. Then the road trip to Mercado Juarez and the heavenly salsa (do you all ship it yet?!?), the fresh tortillas, the tex-mex sauces and chimichangas and burritos and enchiladas.

Then there was Manchester (the Red Arrow), and Anaheim (you remember tacos right), and Denver (where did we eat there?), and now New York City. Karl and I aren't quite as busy as some other pals at the conferences, and we've made an effort to take our time and our money and plow it into exploring the food of the cities in which we find ourselves.

Saturday night we were congregating in the hotel lobby with hordes of other conference-goers. We sorted through options ranging from Creole to Ethiopean, to Columbian and headed out of the hotel with a sheaf of menus printed off by the very helpful concierge, turned right onto 52nd street, and walked over to 9th avenue.

Once there, we decided to walk a two block circuit and then pick our spot. We saw one of the places from the concierge's list (and more on it later) but it appeared small and busy and wait-inducing.

So we headed back up to 52nd and 9th to Ariana, the first thing Karl and I had noticed when we walked onto 9th avenue. As it often does when the two of us get together, we just stumble onto tasty. 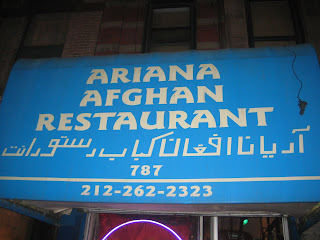 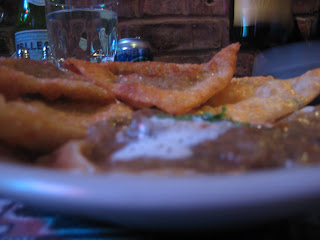 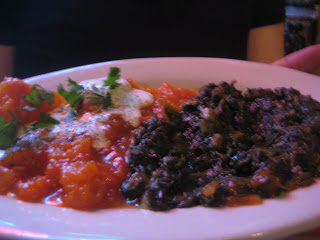 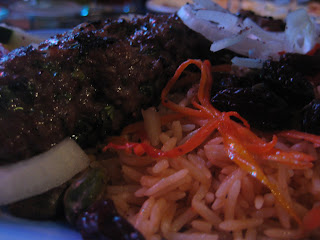 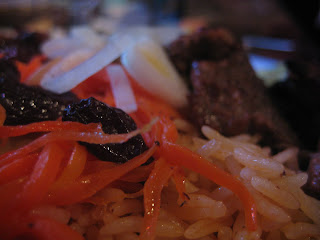 Posted by redneck muppet at 9:46 AM