Let me start at the almost ending. You are a lucky person, I believe, if your feet are propped up on a centuries-old city wall with a cannon to your right, a rum punch in your hand, and the sun setting on the Caribbean on Thanksgiving night.  I am a lucky person. 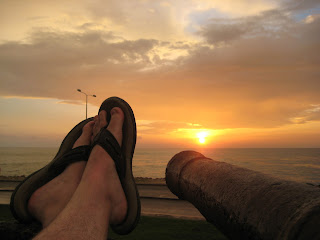 Karl asked where this one ranked on the all-time international  sunsets with cocktails and friends. I'd have to rank it number one in that particular category. I've seen fire in the sky on Spruce Knob with a  cold beer and the best friends in the world. I've run up the dunes to watch the sun set on the Atlantic with the Gironde and my family behind me and a  glass of Bordeaux in my hand. And I've seen gold run through the trees and marshes as thousands of birds swirled, fished, and dashed through the Okavango swamp delta when a river couldn't find the sea in Botswana. 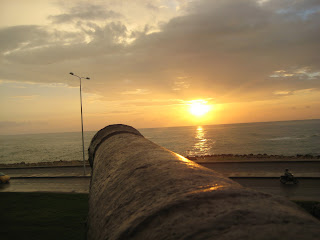 But there in Cartagena we were four friends with a  view and some tasty rum punches, pina coladas, and Mai-Tai's in hand.
And then there was the beach. Four hours on the sand and in the water with books, waves, and a view. 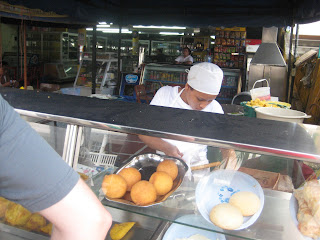 But in the beginning, there were empanadas. You knew that right?

(Post-Trip Aside: I hate hot pockets more and more since this trip. They have RUINED the empanada for the American palate. Why couldn't they have just let more people travel to Colombia, find the real deal, and then make a better product??? Seriously. This bugs me. A lot.)
Rolling out of the hotel about 10. Empanadas around the corner on our way to the beach. Tried a couple of new varieties including an Arepa Karl had that was actually a sweet corn bread like American yellow-sweet and studded with the Colombian mozzarella. A bit to crumbly for Karl and I, but DrChillyD was so about it she rocked it again the next day. 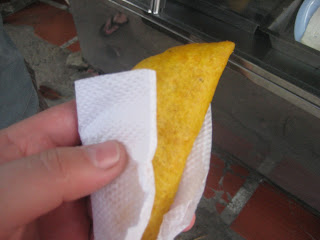 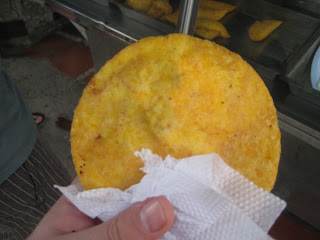 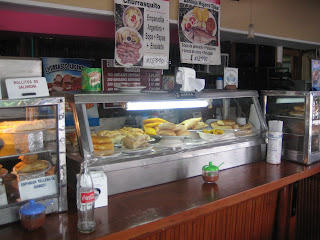 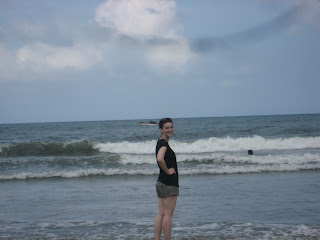 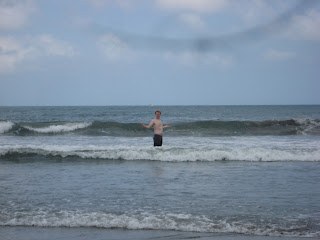 In the ocean is even better. 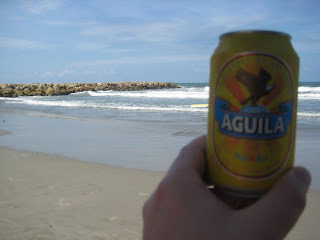 I, however, found the omega. The be all. 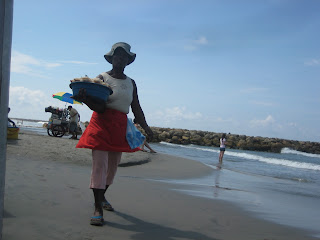 And there were sales options abounding on the beach.


But then there were the creepers.


There was really only one time I didn't feel 100% safe the entire trip (well two if you count safety of cake, but we'll get to that at dinner tonight) and that was only feeling a bit creeped out by the beach walkers. Especially by the Massae ladies. There were carts of ceviche (w/ dubious if any refrigeration); ladies with what appeared to by multiple varieties of shredded coconut goodies; gents with crap t-shirts, sunglasses (offered even when all four people had shades on), and 'coral' jewelry. Some guys carried coolers with (somewhat) ice 'cool' beers and sodas. 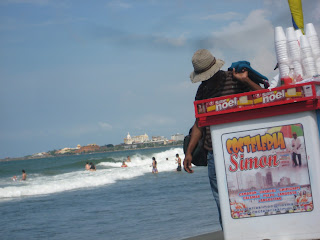 But the massage ladies take the cake. I was offered a massage in Cartagena more often than some strange dude would ride by me on a bike in Amsterdam in 2000 and offer me X. And they were persistent even in the face of "no, gracias" clearly enunciated. After you said that, they actually leered in closer to you and tried to touch your leg (as if that act would ratchet down the 'get the hell away from me vibe').
Okay, I've already spent more time thinking about the words here than any of us really did that day, but it stood out, so there you have it. Pissed me off a bit that they were all such vultures. I didn't want to stop one of the coconut fritter ladies for fear I'd be buried in an avalanche of Afro-Caribbean massage and coral vendors; never to be heard from again. 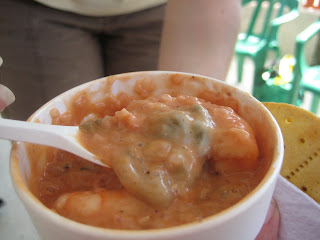 Back to Submarino after the beach for another round of shrimp ceviche. Such a tart and spicy concoction of garlic and citrus with amazingly fresh prawns. 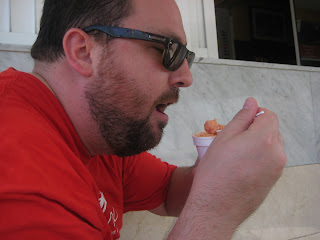 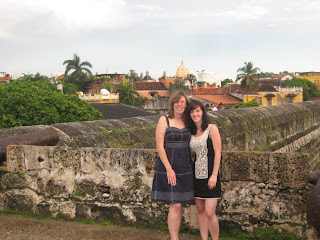 After the pool and some down time at the hotel we headed to the old city for Thanksgiving night. Cafe del Mar for a cocktail at sundown and then we'd wander into the city for dinner. 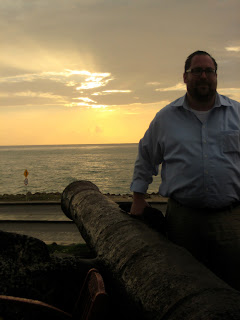 It was, in fact, worth the trip just to be here. 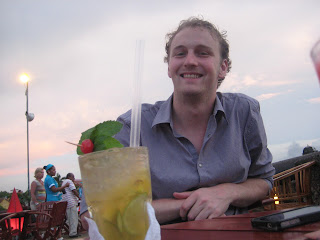 
After this we headed in for dinner and found a El Bistro, a Continental joint owned by a German guy and we found Thanksgiving bliss.


There was papas puree on the menu. That's mashed potatoes for the rest of y'all. The cevice came with a type of yams. Check, check on sweet potatoes. And because it was German-owned, so there was Apple Strudel on the menu too. Check, checkity on apple pie. Damn near a full Thanksgiving meal.


Amazing filet mignons, a massive bone-in porl chop, more ceviche (sea bass this time) and one of the few meals in Colombia that comes with salads.


Only downside was the lady at the table next to us. We were discussing what we'd order for dessert and DrChillyD was waxing awesome about the empty plate of former chocolate tart she was going to have. Karma-soon-to-bit-you-in-the-ass-lady got up for a minute and when she came back I (being the closest to her table) heard her say "I just pre-ordered the last piece of chocolate tart."


You walked up while you were behind us in meal service and ganked the chocolate tart from someone because you heard them talking about it?


I wanted to throw a friggin' bucket of water on your Wicked Witch of the East shameless self.


Instead, we all found serenity now...because...well...here: 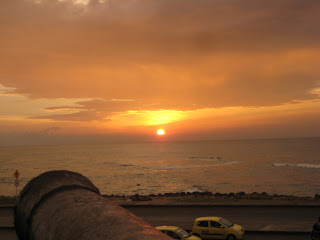 Posted by kitchengeeking at 5:04 PM