Day 5: Zipaquira and the Salt Cathedral

A day trip out of Bogota started with Karl and I heading over to the Empanadita stand across Carrera 7 from the Hotel. Juan Valdez pastries would not suffice for our needs. But dos empanaditas Bogotano y tres empanaditas queso would. And that's what happened. 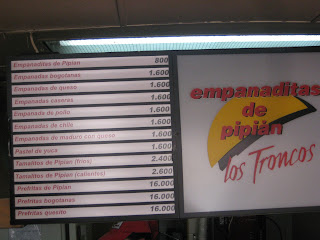 This is where you learn an important distinction between Karl and I. He loved the sweet queso empanadita with a slight dusting of sugar on the just fried crust.
I loved the savory carne y papas Bogotano, even for breakfast. 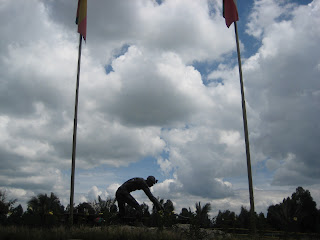 Off we went North to Zipaquira to visit what Colombians voted "The" marvel of modern Colombia. A cathedral built underground in a massive salt mine. 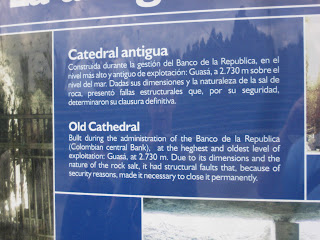 The original cathedral was a small space in which miners offered prayers before starting their shift. It became a tourist attraction but was eventually deemed unsafe in the late 1980s. 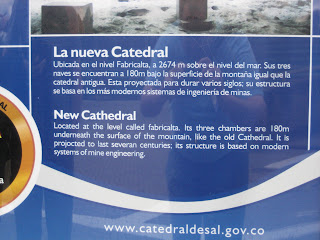 So from 1990-95 the mine undertook a project to create a massive cathedral in the mine. And create it they did. 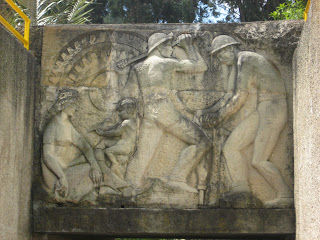 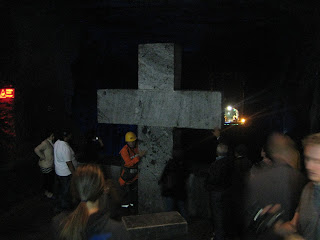 First are the fourteen stations of the cross providing a walking tour of Jesus' walk with and death on the cross. Stations are about 30-50 feet apart and feature huge crosses of 10-12 feet in height carved into the salt with stone prayer stands. 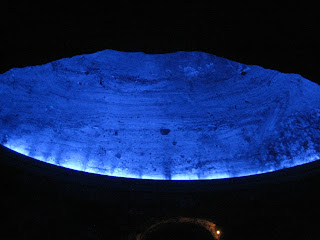 Once past the fourteen stations, you descend further into the chapel of the cathedral, a MASSIVE cavernous set of rooms with ceiling reaching 100 feet and pillars 30 feet around holding it all together. 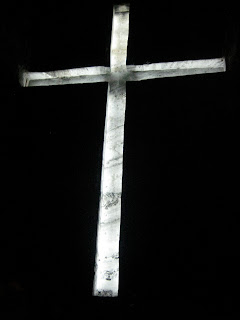 There you see the main cross carved out of the rock. A 60-plus foot tall monolith in the dark under the rock and earth. 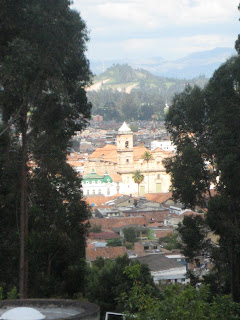 From the cathedral you can see the town of Zipaquira. About an hour north of Bogota, the town is about 110,000 people. 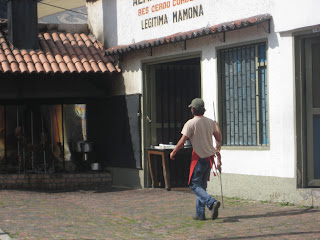 Some of those people have a job of taking meat from the kitchen and putting it on vertical spits standing over hunks of burning logs. Not a bad advertisement for your restaurant. 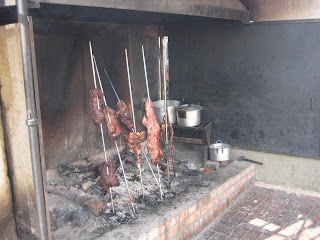 Like I said...meat on sticks. Beef, pork, and LAMB! 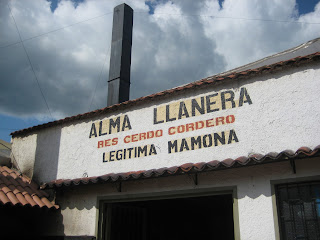 Here's the name of our lunch joint. 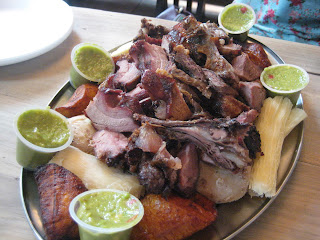 Here's what they do for you. Order by the number of people you have. Hunks of meat, yuca, plantains, roast potatoes, and guacamole. 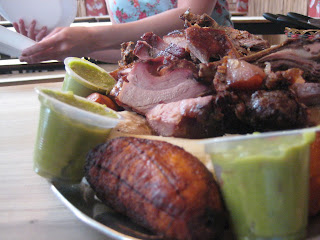 Plantains and guacamole get the close-up here.
Sadly, there was some food left on the plate when we were done. It wasn't much though.
Posted by kitchengeeking at 11:27 AM