So we got here. And it wasn't too tough.
It's been a long time for me. Four years ago I took a trip to Paris. I wandered around my old haunts, had a pint of Beamish Red at Bugsy's, caught up with Paul and some of his friends for a late night dinner, and strolled around the town without a care in the world.

Work, travel in the US, relative levels of employment, and the rush of life got in the way since then. I've had vacations, and I've had excursions. But this morning there really was a rush of adrenaline around every corner. Getting up. Getting on the airport shuttle. Handing my bag off to TSA. Getting to the gate. Hearing my boarding group called. All of it created another layer of giddy. And I was only a small cup of coffee into my day

First I should tell you that I have a habit of eating horrible food at an airport when I'm on the way to a grand food adventure. It just sets the tone. Not this time. Los Portales in Glen Burnie on my way to BWI yesterday and Joe's Crabs for a stone crab feast last night. And then Ice Box this morning. South Beach cafe that actually said 'hey, let's open an outpost at the airport and give people good food when they're traveling.' Hey, Ice Box? Thanks. 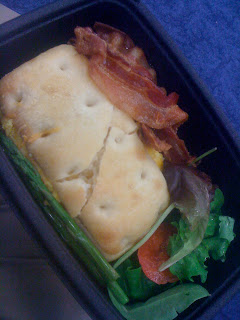 Thanks also to the traveler who chatted up TheQuietOne about some nice restaurants near the hotel and the young lady at baggage claim who let us in on the secret tax stamp we could get now that would minimize the 'exit fee' we'll have to pay to leave Colombia.

Now we'll take a break from nostalgia to weave in some of my snark. You like them both; now you get them both in the same post. First rule of traveling, I don't hate your kid. Second rule of traveling, I dislike you for not a) having a pacifier, b) feeding the youngster, or c) checking the diaper. No I'm not evil, and no it wasn't the ear popping. We were still on the ground in Miami.

At least there was edible noshing on American Airlines today with the highlight being some quite fresh canteloupe. 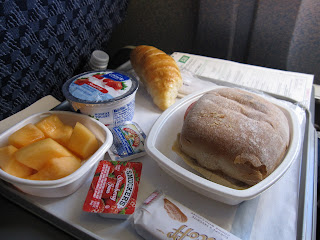 All that crying kid stuff got better because the hum of the engines washed it all away as we headed south across the Caribbean to Bogota. I noticed we would pass almost directly over Cuba and was reminded again of my father's useless (in my mind) fear of that island and support for the continuation of the (useless) embargo that keeps me from some of the best beaches and food in the Caribbean world. Get over it folks. If you're all 'engage with China to bring about reform' then please check your hypocrisy at the door and let 13-days take its place on the history shelves too.

There may or not be another post in Bogota tonight after KarlJohn and DrChillyD arrive. I expect it will happen. For now, I leave with a few photos of the international travelers. 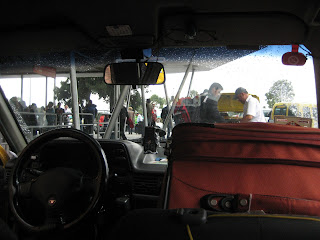 We landed. There was not enough room in the trunk of the cab for both of our monstrosity bags. 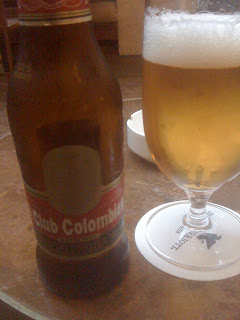 While waiting for the other two peeps in the group to arrive, we had a cerveza on the hotel's patio. Tomorrow we'll choose seats better for a siesta on the lounge chairs overooking fountain and pools. 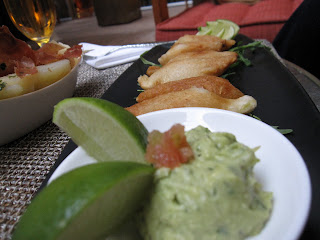 Language barriers will not keep me from fresh guacamole and cheese and sausage stuffed empanadas. Will it stop you? Funny bit was that we pidgened that we wanted food and then ordered, had the server come back and we realized one of the things we'd ordered wasn't available but there was something 'mue rico' she would substitute. Done. 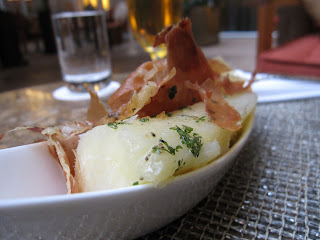 That, folks, is sexy yuca. Uh-huh. Steamed and doused with a garlicked herb-butter sauce with crispy jamon.
What? You didn't think I could avoid close-ups of pork products for too lond, did you?
Next food shots will occur off hotel premises. 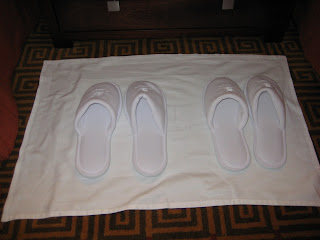 Oh, yeah. Speaking of hotel premises. Turn-down service includes placing our slippers on a towel for us between the beds.

File Under: "Not the international travel I'm used to said the former hosteller extraordinnaire."
Posted by kitchengeeking at 6:34 PM

Email ThisBlogThis!Share to TwitterShare to FacebookShare to Pinterest
Labels: The Quiet One, travel