Day 2: Dinner and Passing Out

The second part of the title is easy. DrChillyD had flown from LA to Dulles, gone to KarlJohn's place for two hours, taken cab to National, and flown to Miami and then Bogota. She was tired. The kind of 'I was on three planes over four time zones and two continents today and didn't sleep on any of them' tired.

Quick cab ride from the Hotel to Zona T and the hustle and bustle. It's two streets in a T (what clever-ness) and the surrounding streets full of bars, restaurants, clubs, and dance joints. It was loud and vibrant and young. Busy on a Saturday night with couples and gangs of friends out for a good time.

One curiosity that stood out were the congregation of small carts (think a flat panel placed on a small grocery cart) selling cigarettes (we get that), gum (okay, sorta understand minty fresh breath), and lollipops. Big Tootsie-Pop sized lollipops. And they were selling them for a reason. Huge throngs of teen to 20-something girls were gonzo for these things. I think my friend Wendy needs to move here. She'll be among her lollipop people. 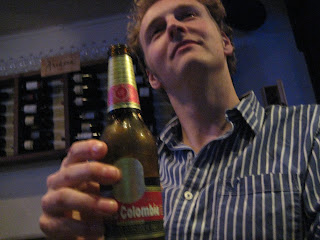 We wandered for a brief time and then decided food, cab back to the hotel, and sleep were of utmost importance. Karl got his "I'm having my picture taken and must look thoughtful" going on. Much toasting occured to our arrival and the strange but delicious few days we were going to have here.

The spot we picked was called Angus. Loud, throbbing dance musak made us believe that the inside tables (where we sat as there were no outside tables left) would soon be a club with gyrating Colombians and dated techno.

After a baffling experience attempting to pantomime our drink and food orders, we ended up settling well. 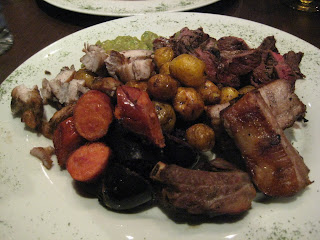 Parrillades. Two of them at the table. Moutains of pork short ribs, morcilla (blood sausage), chorizo (of a style that made of think crisp-skinned red-hots), flank steak, chicken breast, a pile of small roast potatoes that were sweet and wonderful, and a hefty dollop of guacamole.

None sucked. Almost all was consumed. Chicken was chicken. Morcilla was basically all mine. It was a tad sweet with some curry-like seasoning and super-moist. Quite tasty.

The pork ribs were finger-licking good and the steak was out of this world. And this was a place called Angus that offered both domestic and Argentinian beef on the menu at heftier prices than the pieces of flank that came with our meal. Salt, pepper, and medium rare awesome was all we tasted!

After that meal, we all needed to sleep. So sleep we did.

And then well rested, we headed off at a leisurely pace to tackle a Sunday in Bogota...
Posted by kitchengeeking at 6:22 PM