Simple concept. I show and tell. You enjoy. 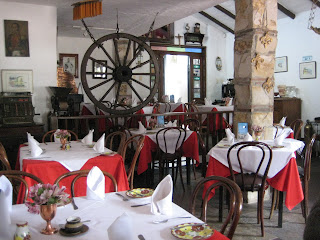 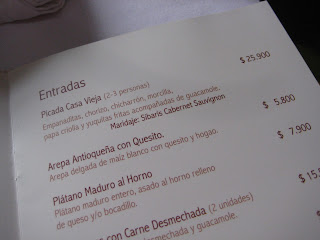 First two items ended up on our plates. None survived. 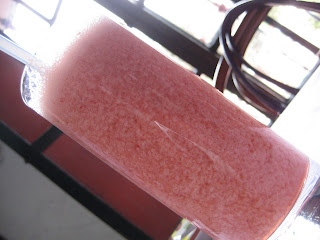 We rocked five juices at our table of four (that thanks to our inability to fully comprehend the language). Here's Karl's strawberry juice. There was also Mango, Passion Fruit (tart and intense), Soursop (we have NO idea), and Guanabana. 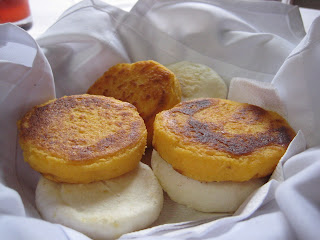 Hello arepas. How are you this morning? 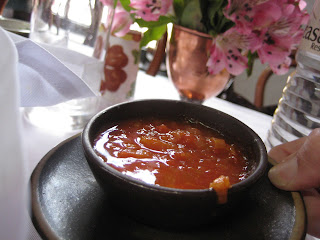 A little fresh tomato salsa to go with butter and arepas. 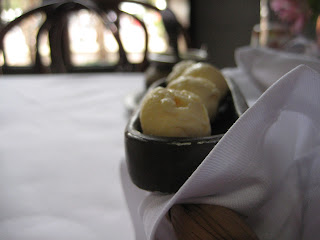 Speaking of butter for our arepas. 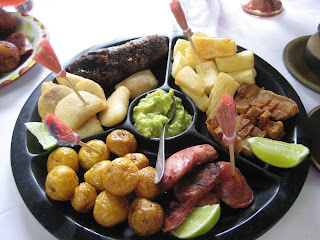 When we go mixed appetizer, we go big. Mini-empanadas were crisp on the outside and filled with sausage and cheese. They sat next to the morcilla which used quinoa as its binder and had capers inside. Delicious and all mine after a few perfunctory "I'll try it again because it's different" tastes from the group. Fried yucca and chicharrones (deep fried bacon y'all). Chorizo and potatoes (the ubiquitous small sweet roasties that appear everywhere in Bogota. 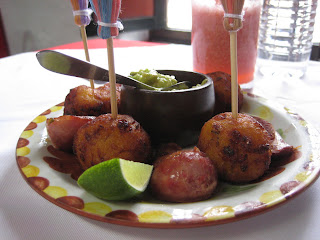 O.M.G. Sweet plantian pureed and then formed into balls and fried. Served with chorizo, lime, and guacamole. SOOOOOOO GOOD. 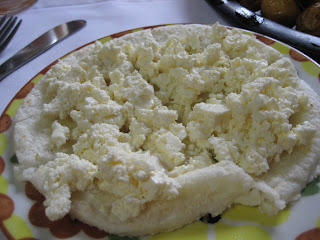 A large arepa topped with queso fresco. Tasty, but we all got trough this first to move on to the other items. 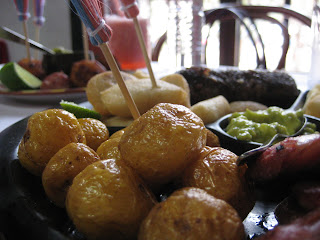 I LOVE these little potatoes. In this meal, they served as the home fries to the morcilla's hash. It was perfect meat and potatoes bliss. 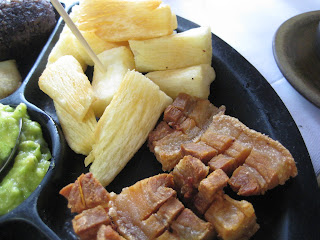 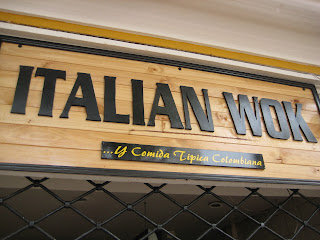 I was confused by this sign. So were the rest of us. It was closed so peering in the window was the best we could do. Appeared to be Colombia's version of the Chinese take-out joint. But the "Italian" and the "Comida Tipica Colombiana" were definitely strange adjectives here. 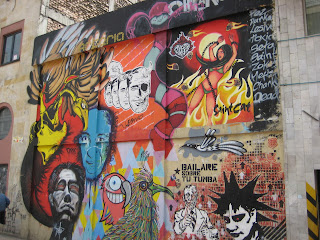 Street art was EVERYWHERE in Bogota's central district. Much of it was a reminder of the recent past, the drug wars, and the rebels from the west and south. 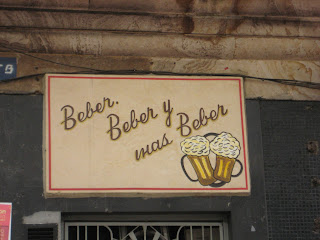 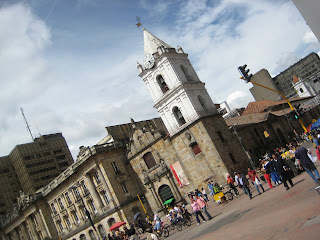 Cathedral at Place Santander near the Museo de Oro. 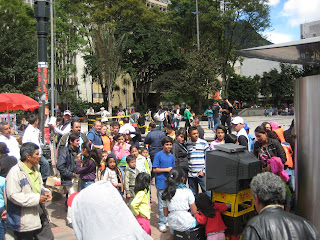 Strange part of the day. Recognizing that the street was closed off for pedestrians and that there were multiple karaoke machines set up. Some were excellent. Some were tragic. This little dude? He was just fun. And the four gringos totally spooked him in mid-act. Sorry pal!!! 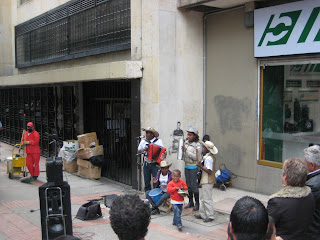 A band playing for a huge crowd along Carrera 7 on a Bogota Sunday. 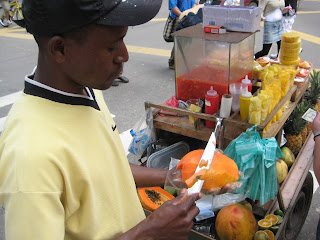 That's not a knife...wait. Yes it is. And it's slicing through that guava like butter. Street carts selling FRESH squeezed juice and fruit, along with grilled corn and meat on a stick were everywhere! 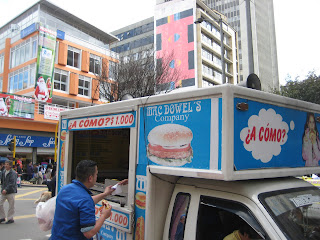 Coming To America, anyone? No, we didn't stop to try. 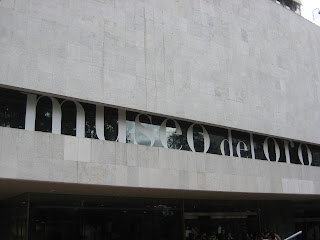 We went in. Free on Sundays. Natch. 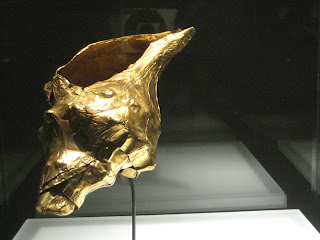 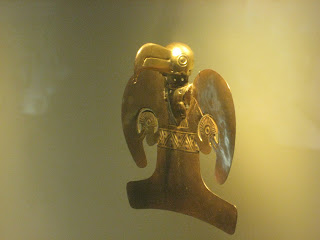 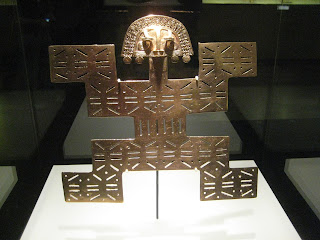 Get down on it. 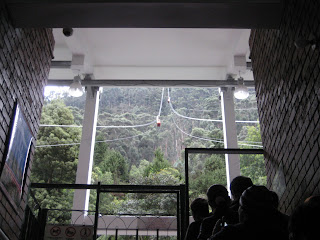 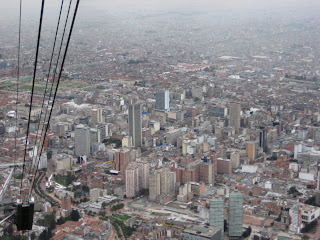 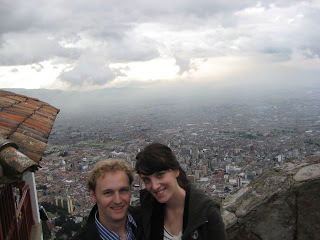 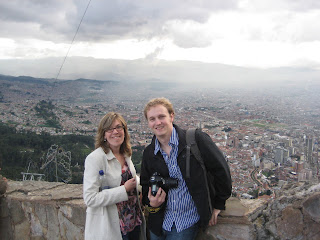 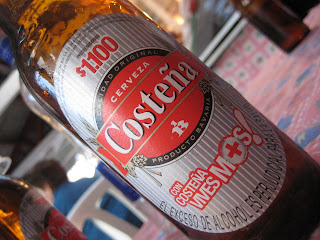 Beers after the hike and cable car ride. It WAS 4:30...beer o'clock y'all. The Colombians make great pilsner-style beers.
Dinner was Asian fusion in a stylish part of town around a park. Parque 93 if you're interested. Food was good and company was excellent, but not worth an upload now.
Gotta run, it's "Street Food Monday" here in Bogota for Karl and I, and we're excited!!!
Posted by kitchengeeking at 10:00 AM

Email ThisBlogThis!Share to TwitterShare to FacebookShare to Pinterest
Labels: Colombia, DrChillyD, KarlJohn, The Quiet One, tracel