It Was One Fine Weekend

It was the sunset painting the edge of a front as it crossed the ridgeline of the western Shenandoah Valley. At arm's length it was two finger's width of blue sky between the on-again, off-again drizzle & cloud and the darkening line on the right horizon where earth and heaven dance. The work day was done and week was through. 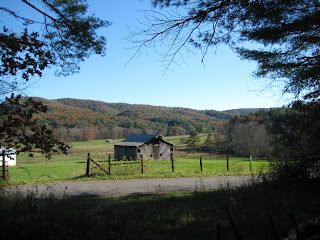 It was the last rays piercing through between the cloud line and the tops of the mountains that you could see when you were at the top heading down, but that was covered by the anlge of the slope as you worked your way to the next peak. Twisting left and right, up and down, over and about. Always a bit more south. Always a bit more west. Always a bit higher up than before the last mountain. 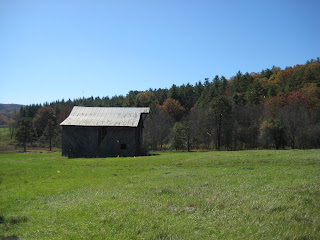 It was Augusta, Rockingham, and Bath Counties through the towns of Buffalo Gap, Augusta Springs, Craigsville, and Goshen. The Tastee Freeze was doing land-office business on the western end of Craigsville. Prison guards and locals teens heading in for a Friday treat. It was Warm Spings and Mountain Gap and the folds of the mountains covering each town over. A quick turn and you're on a 'main street,' and then a quarter-mile later you round another bend and the George Washington forest has swallowed you up. 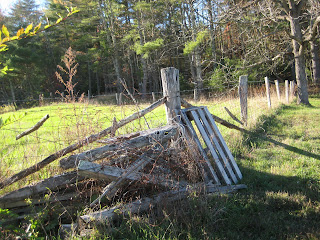 It was the burnt-orange leaves swirling in the bend as I headed down the mountain into Warm Springs. There was the road, the leaves, the wind, my car's headlights, and my thoughts. That was it. By this point in the drive it is always the older memories that creep in. Summertime and lemonade. The only time I could eat sugary cereal; and I got to pick it myself to boot. Sorry? Oh, of course it was Cookie Crisp. If you were an eight-year-old who could choose any cereal on the shelves, and the shelves contained a cereal that was LITERRALY chocolate chip cookies over which you pour milk...you'd choose that one too. 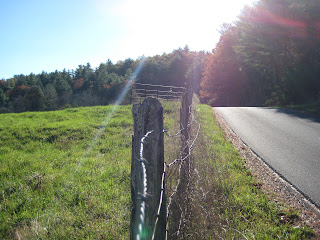 It was the lights through the trees to my left that could only be the farm house across the creek and through the fields; one more turn to make. Hilarity as I passed the house over my left shoulder to keep on to the turn at the end of the road so I could whip around and jog the last mile back to the entrance, the yard, and the farm. There are (were) three stop lights in the county. One in front of the bank and one in front of the county building downtown. Regulating traffic around the diner and the bike/coffee chop. And there was one at the end of the bridge in town on the other side of the river. Now there are (were, by the time you read this they may be gone) two more regulating the hum and drone of local truck traffic and campers hurtling along WV 39 over the bridges on either end of the stretch in Minnehaha. 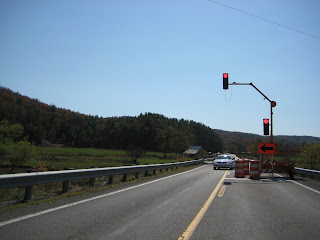 It was the rock wall in the front yard putting those ubiquitous garden-stoppers to work for once. You havne't appreciated gardens and growing until you've picked a pepper from the back yard. And even then, not all gardens are created equally. Mom's is rockier than that top in Tennessee. It's just plain moonscape under topsoil and over clay. Retirement is hard work when it's clearing garden space rock by rock. Mom handed me the scissors because my shoes were still on (a rare occurance as family bliss and relaxing is best achieved in bare feet) and I took fewer than 50 steps to get to the herb garden and gather some chives to mix with the garlic and cottage cheese for a dip. 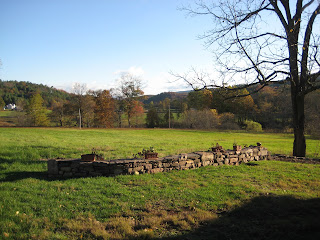 It was crisp edges and soft flesh of a butternut squash that became a round loaf rising on the vent from the stove. It was mom kneading and turning, hands working, telling me that she didn't used to work the dough long enough. A later conversation about biscuits and the fact that neither of us had tackled them yet. But those squash rolls, sweet and tender and sopping up butter at the dinner table; those she knew how to make well now. 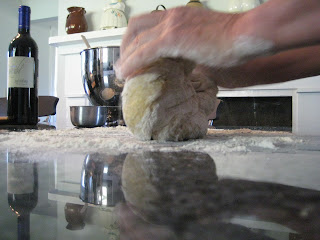 It was a trip up the road to Gene's so we could help stir the nine bushels of apples bubbling in a copper pot. Kin, neighbors, and even friends from over the Mountains on the East Virginia side started at 8am with the fire. They'd peeled and cooked the apples into sauce the day before. Didn't do that one time and they couldn't start canning until after 9pm. So a day-ahead prep. We stirred, Mom and I. Ms. S provided us with clear moral support and a well-thought out desire to avoid being scalded by roiling apple butter. 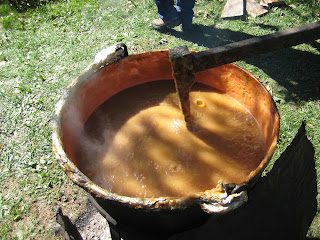 It was the quick dance of cooks in a family kitchen as guests arrive. The potatoes were done but needed to be put back in to warm as the lamb came out to rest. There's no way that thermometer is right...but the touch test bears it out. We'll pull it and rest in, then slice it and put back in what's too rare (though the cooks, Mom and I, would not have put much back at all). Here are the guests, one cook lost to provide tours and hosptality. Four guests means both the ladies who call the farm home are out of the kitchen. But I kinda like that; I get to play more and plate it all up. 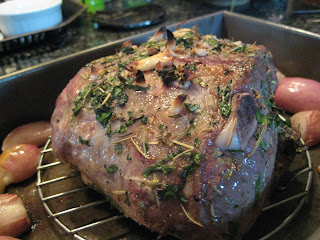 It was the light frost on the grass tips as the sun struggled, wavered, and then burst over the east with clean early-Fall rays that don't let you forget summer; but you still know it's just a memory now. By 8:30 the frosted tops are green and covered in sun unless a stray building gets in the way and makes a shadow. The forest out the window is all rust. If I were a Leafer I'd decry the early turn and my schedule that didn't let me see the peak turning. But I'm no Leafer, and that rust on the hillside fits perfectly with the coffee in a worn mug sitting on the counter next to me. There's a full pot on, and whenever the rest of the house rises we'll pull some breakfast together. It was going to by cheese grits and ham steaks, but Mom reminded me she had green tomatoes to give me. So now we're having fried green tomatoes and poached eggs for breakfast and I'll think of the Bluegrass crew and wonder how many people in Charly-West will have the same breakfast as me today. 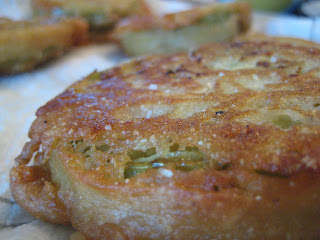 It was a quick trip home to the water's edge; have to be back by seven for supper at Dad's. Lamb shanks, you know, are a favorite of mine.
Posted by kitchengeeking at 9:23 AM

Email ThisBlogThis!Share to TwitterShare to FacebookShare to Pinterest
Labels: about me, Cooking, The Farm