Want me to introduce you to the farmers who grew it all?

Yeah, I can do that.

A hot bowl of summer fresh pulled together in one pot in 15 minutes of prep. 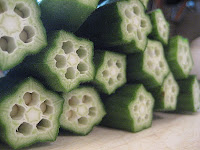 Door's open and the fan's on because there's something sacrilegious about air conditioning and black eyed peas. At least tonight.

Honeycomb of cajun goodness. And mid-atlantic. Did I ever tell you about the time (summer before I was a sophomore in high school) when there was SO MUCH okra in our garden that we were freezing it and then thawing and dusting with cornmeal for a quick fry to replace popcorn when we watched movies...at Thanksgiving. 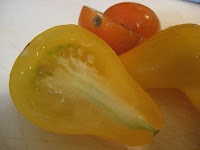 I used to hate tomatoes. Salsa, tomato sauce, marinara, and the like were okay. But slices of tomatoes were not. And varieties of tomatoes were meaningless because eating tomatoes just didn't happen. Then I ordered a turkey burger at the old pub and DWave asked what I wanted on it. Lettuce, tomato, and mayo. Which was REALLY strange. Because of the tomato thing, but also mayo. Neither were on my list of acceptable foods. But damned if that burger wasn't one of the most perfect sandwiches ever, with each ingredient playing its critical part of the whole.

Now I'm hooked. Not slice one and put salt and pepper on it and eat it hooked; and not walk by the bowl of cherry tomatoes and just pop a few into my mouth. But they are amazing little veggies (stop, the Supreme Court agreed and we've treated them as veggies for too long…) and I don't know that I'd really feel it was summer until the first ones came off a vine I'd seen and were ready to eat. 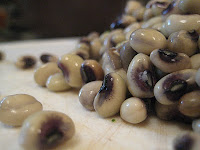 As for black eyed peas, well, they're just magic. Part of one of the best cooking days of my life. Big Game tasted the greens and the beans and literally stopped to call his mama. Of course, that meant I spent most of the rest of every cookout getting there early to make green, black eyed peas, and mac n' cheese in the kitchen, but I do lurve you Pearl!

They all sat in the pot for about 20 minutes and then I was too hungry to wait much longer. Check your seasoning. Add salt if you need it. It's not evil (It just has a long and sordid history). I let it the liquid simmer off a bit so it was thick and pulled together by the okra but long before the peas start to break down.

Well it was my dinner, think how I felt.

The okra didn't break down. There were fibrous bits that just would not cook away.

Trust me. I tried. Brought it back to a boil again. Simmered for another 20 minutes. Tomatoes were pulped out (which was fine). Beans were still good. Okra was mostly soft...but there were little fibrous 'tags' that had insinuated themselves into every bite.

It's not all roses and perfect dishes. Sometimes, even when you think you know what you're doing...it just doesn't taste good.
Posted by kitchengeeking at 10:06 AM