Here's what happens when I drive through a town while trying to avoid interstate traffic on my way back home from the farm. I see Front Royal. And then I see it's on the Shenandoah River. And then I see custard stands. And then I read about a chef couple who met when they worked at the Inn at Little Washington. And then my sister calls to see if I'll be in town next weekend and instead I invite her to road trip with me and Karl. And his lady comes with. And Shaunica shows up too. 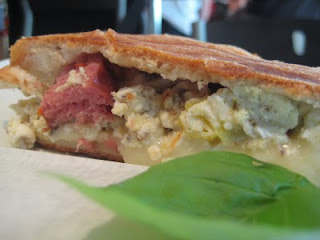 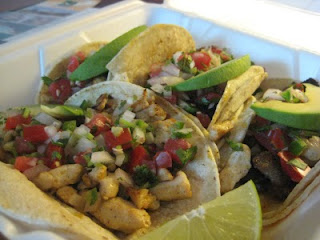 And because it's Karl and I, we stopped at the Taqueria I'd seen on my way out of town the week before. Bistek, Pollo Azado, Chorizo. Soooooo good.  Karl, ChillyD, and I literally huddled over the hotel room desk stuffing our faces with tacos.

We also discovered they were HOT. HAWT. Really quite warm. We discovered the reason for that the next day. Suffice it to say it was not, as we suspected while huddled over the desk, the hot sauce. 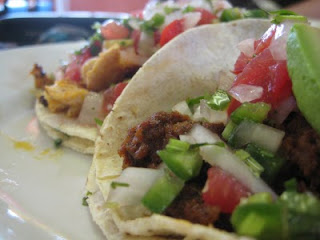 When we stopped on the way out of town on Sunday we realized that it wasn't the hot sauce. We were much more careful in our application. But look closely at that picture. Notice the green. Realize those are NOT diced green peppers in the pico. Yeah, close to a metric ton of fresh jalapeno, seeds stems and all, in the pico. It was fresh and it was delicious, and I had to take just a little bit of it off. Especially with the chorizo already having some heat.

Between taqueria stops we had quite a full 24 hours. I'll do highlights here and a few individual posts on some of the spots. 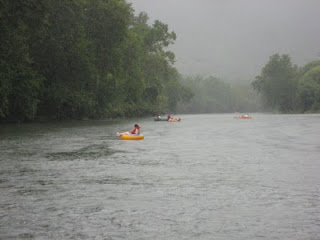 We tubed on the Shenadoah. I was large enough to stop all 'tubing' progress when we hit 'rapids' (places where rocks are close to the surface). We all survived, even though it started raining as soon as we got out of the bus to enter the river.

In the interim, as I was literally ankle deep in the Shenandoah walking our tubes downstream to speed things along. My sister (far ahead of the dawdlers) looked back. My brother-in-law looked back. And they determined that the White Bellied Shenandoah Yeti had been discovered. Thanks fam!

Post river was an amazing meal. It required a stop at the hotel for bathing and changing. We gussied up good. (Well, I put on jeans, a button-down shirt, and the 'fancy' flip-flops that are leather.) 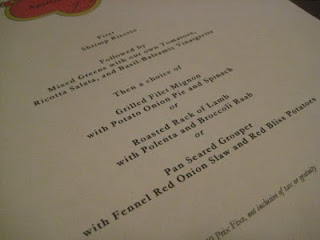 This place is out of site. Downstairs: Cafe and Bistro open seven days a week. Upstairs: Old apartments left in their apartment layout with closed-circuit TVs in all the dining rooms so you can watch dinner be prepared in the kitchen. Only open on Thursdays (Tapas) and Saturdays ($50, five course, prix fixe). That's right...$50. That's it. for a five course from peeps who cooked in one of the most sought-after kitchens in the country. Yum.

Put it this way. I took sexy pictures of the butter and a cork. Think what the fig stuffed with cambazola, out-of-their-garden Brandywines, lamb, filet, grouper, Mexican chocolate cake, Chocolate hazelnut cake, and peach shortbread looked like.

And then there was Sunday. The last day of the trip. The day when we decide every trip to cram as much into our minds, cameras, and bellies as we possibly can before heading home.

So we went to breakfast, then the hot dog/frozen custard stand, then the BBQ trailer in the parking lot of the steakhouse south of town, then 32 miles on Skyline Drive (which was FREE that day), and finally a trip up U.S. 340 back to Front Royal from Luray and a parting taco. Mmmmmm, parting tacos.

I'll leave you with just a couple of thoughts. 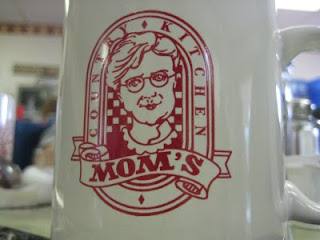 The women at the griddle in Mom's Country Kitchen...is the woman whose face is on that mug. She's branding. In Front Royal, VA. I love it. Expanding here will include what Shaunica's face looks like when she has Creamed Chipped Beef for the first time and what ChillyD's face looks like when she has Applebutter for the first time (even though it was just Smuckers and we told her the real deal was much better). 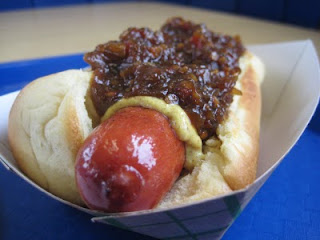 That is a Spelunker Dog from...Spelunkers. It's a fried weenie on a soft bun topped with brown mustard and the most incredible sweet and hot carmelized onion relish I have ever tasted. It's house-made. It's worth an 80-mile drive from DC (plus the 35 more miles to get out to Annapolis). I mean, they should bottle it. I asked if they did. Sadly...no.

And with that, I owe you full posts on 1) A Dinner at Apartment 2g, 2) Spelunkers frozen custard, bad peanut butter luck, and the Frozen "Kustard" of Front Royal; 3) Mom's Country Kitchen and Two New Foods for Two New People. We'll get there.

You didn't believe me about the sexy butter?

You didn't read the teaser post about all this that I put up Saturday night?

Or was it Sunday morning?

In any case, you want to see sexy butter? 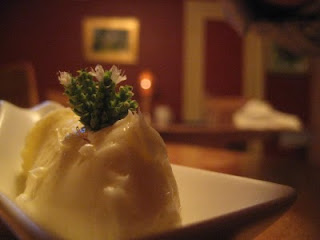 I TOLD you so.
Posted by kitchengeeking at 9:59 AM

I've tubed the Shen before. It's fun! A college friend's brother owned a rafting/tubing company there and we would go in the summers. Fun!