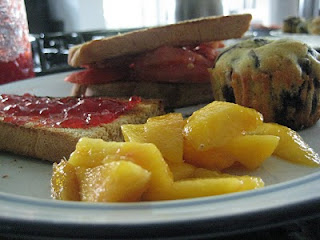 We finished the first pot of coffee and the house guests began to stir. That was likely because mom decided it was time to start frying bacon. A good decision, and one I supported.

There were blueberry muffins that had thawed overnight, not mom's favorite work as they were Splenda and as such slightly gummy, but I snarfed mine down.

A half loaf of her wheat bread, soft and thick before hitting the toaster and the buttered knife.

A cranberry & orange marmalade from the Eastern Panhandle and a strawberry jam from the neighbor down the road who bought several pounds of the berries last year and just canned, canned, canned. We thank you Rene.

Of course, I made a Bacon and Tomato Sandwich on Wheat Toast. Of course I did.

And there were our house guests on their way to DC too. So we talked about the Newseum and the Spy Museum, the National Mall and some of it's hidden treasures like the FDR memorial, Ray's Hell Burgers and Zaytinya, Meskerem and 2 Amys.

After breakfast Dad guest disappeared because he was not about to leave the farm without having taken some photos. Everyone else talked about museums and restaurants and travels until he was ready...off they go.
Posted by kitchengeeking at 10:45 AM

Email ThisBlogThis!Share to TwitterShare to FacebookShare to Pinterest
Labels: breakfast, Mom, The Farm