What I Read Last Week

Two bits from the interwebs this morning. A post about grits later. That's right, you want some of that.

First, CNN actually had an interesting story on its front page this past week. "Food 101: Seeking Clues in the Kitchen" takes a look at people in their 20s and 30s who really just can't cook, some folks who are doing a crash-course in remedial cooking, and a few videos on the courses and their skills. Basic premise, this generation's folks didn't make them learn how to cook and they never did it for themselves. The paradox of a food obsessed culture only worsened the gulf, with people reading and watching food all the time, but only consuming it in restaurants, not learning how to produce it themselves.


From British celebrity chef Jamie Oliver to First Lady Michelle Obama, a food revolution is brewing in America, a push to return to the bygone days when healthy home-cooked meals were much more frequent. Despite the efforts to get Americans back into the kitchen, there still exists a group of adults in their 20s and 30s -- like Clark -- who are clueless in the kitchen.

Ironically, these 20- and 30-somethings may have stretched their palates while traveling the world and even spend hours watching the cooking shows and "Top Chef," but they are defeated when they enter the kitchen. They don't own cooking utensils in their Tupperware-filled cabinets. They rely on microwaves, restaurants and takeout menus to feed their empty stomachs. Simply put, they cannot cook.

"Lots of people think, read and talk about food, but they don't know how to do anything," said Jennifer Berg, head of the Food Studies program at New York University. "There is an incredible disconnect to actually knowing how to do something." 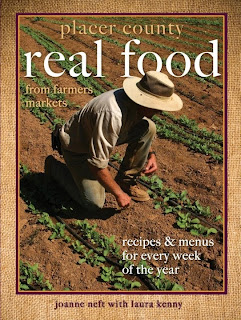 The second bit of food news is much more exciting to me. I got an e-mail this week about Placer County Real Food. Two ladies, one farmers' market, 52 weeks, one dinner per week using only local produce.

Pretty god stuff. I don't think I'm in a temperate enough place to do that full year, I just think it's grand someone else can.

And the recipes look fantastic.

Maybe I'll get up tomorrow morning and head to a market myself, since my lazy bones went all of downstairs this morning and I couldn't be bothered to exercise any initiative or motivation to leave the house until about now (that'd be 11am). Oh well, The Quiet One is out of town this weekend anyway, so Waverly would have been a strange and foreign land...though I will miss my Curry Shack this week.

In any event. Two things for y'all to read up on while I get busy writing the next post (and popping up some video about grits...Mmmmm, grits.
Posted by kitchengeeking at 11:07 AM

Email ThisBlogThis!Share to TwitterShare to FacebookShare to Pinterest
Labels: about food, cookbooks, Cooking