From Earth and Braise to Green and Heat 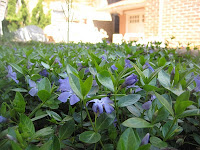 When I first knew I was going to Pocahantski's for brunch today, I had a very different post in mind. I thought I would be writing in a very different voice than what came out as I sat to remember and put to words what I saw, smelled, tasted, heard, and felt today.

In the end I walked back into my apartment with leftovers. It happens. And that is what tipped the scales for me in how I would have to tell you about it.

I go to a party where I am requested to prepare some goodies, the hostess is also preparing goodies, we are friends with like minds & so there are more goodies than there are pockets in tummies in which to put food. Even with grazing. 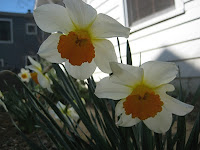 And when I walked back down the pathway from the street to my door, I noticed something for the second time, and in a way that made me stop. The first time was standing in front of my office, seeing waving new green as the trees' budding branches swayed in the spring breeze and the flag atop the Capitol steeple snapped to right attention.

This time it was low to the ground and it was budding. A carpet of small plants with pale purple flowers. And a few daffodils undulating back and forth as I walked into the house from my car. 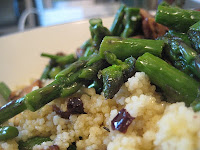 Spring and the kitchen. A gathering of people for no other reason than to have people gather.

It was Easter, but it wasn't about lamb and mint jelly. In fact there was no lamb at all at this gathering.


It was Passover, and we weren't a single-denominational family (ahem, at least that's how the cool kids say it these days). We told stories of times past in our families throughout the meal.

And it was also time for Ms. Vertical to rejoin the world after a long month of boxing up and setting to rest a 100-year-old collection of memories and friendships and family.

It was the first weekend when they told us it was going to be sunny and warm...and they were right. 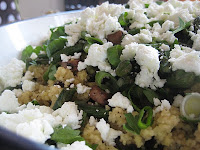 And for me, as I woke up early on a Sunday morning, the day was about saying goodbye to the comfort of the earthy and the stewed, the deep rustic and the braised. There will be more slicing and chopping, grilling and stir-frying to go along with the more sunlight and warmth and friends who seem to slow down with me as we slide through the summer toward the wind dying in August on the Bay.

Picking food from the earth and doing little else but rinsing them quickly and heating them faster than that. Pats of butter on summer corn. Fresh-sliced tomatoes on just-as-fresh-from-my-oven bread. Brightness and growing things and simple preparations and bottles of wine late into the night when the air stays as sweet as the plums in the tart sitting half-finished on the dining room table. 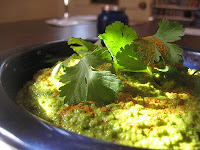 And so I chopped my mushrooms and let them hit the pan dry. Crackling and hissing like a thousand rubber bands hitting the fire. And I tossed them through not even thinking to reach for a spoon. I crushed a bit of mint and a bit of thyme when the second batch of mushrooms had browned and softened so when the salt hit the pan and the liquid from the last ingredient of the winter came out it was immediately taking its part in moving the bright herbs around the rest of the dish.

Once I finished washing the earthen in the growing herbs, it was time for the serious spring to hit the pan. Still pale and tender asparagus, chopped. That same hot pan with a bit of oil to start now and an unwillingness to turn the stove down because I wanted them HOT, not damp. Nothing but heat, carmelization, salt, pepper, and sweet olive oil to coat the greens. 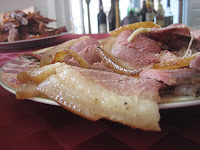 Into the pot they went with the just cooked couscous with red currants. Heft and chew met earth and growth. Scallion and parsley not just for garnish, but because I wanted to cram as much green into that bowl as I possibly could. Pushing and chopping. Scooping and spreading every bright green flavor there was in my house into the bowl.

It was going to be the vegetable at the brunch, the course that wasn't a glory to the gory of butchers. And while that's usually where I spend my energy, it wasn't my job today. 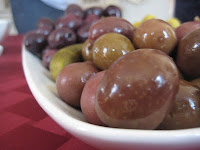 The green and grain (I know, it's semolina) sat next to the curried pea dip of party fame. Apparently, this dish is to Annapolis what macaroni and cheese is to Charleston. Good thing for me I like it. Good thing for you too. If I had to write about making a dish that I didn't like, you'd hate this blog. You'd still read it, you'd just be as angry as me at the people who kept asking me for the pea dip when I didn't want to make it.

Fortunately, as I digress one more time (is anyone keeping count anymore?), it's safe to say that five ingredients in a food processor that's a bright flavor very few people are used to is going to be on my go-to list for a long time. 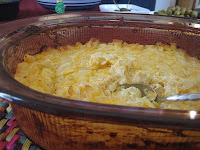 The rest of the table was still comfort and pig. Biscuit and the love of a time when butter was asked for and given, not studied and doubted. Three kinds of pork product (and you'll only be surprised to know that none of the pork was my responsibility...except heating the country ham...and creating so much smoke I drove everyone outside until the table was set and the hard-wired smoke alarm was calmed), a potatoes recipe that is straight out of a 1957 Junior League Cookbook, biscuits AND greek pita and toasted baguette, sausage cheese bisquick concoctions that gave the potatoes a run for their Junior League money, the first deviled eggs I ever made (and liked), and the loving donation of cupcakes of the "i'm a baker and will sell cupcakes to the world because cupcakes are a much maligned species of the cake family that will have their due."

And so we all gathered informally. Chatted about mortgages, parents, home renovations and New York City delis. We has country ham biscuits, fresh fruit, some salads, bacon, olives and cornichons, and less than a care in the world (once Dave found the large juice glass and his mimosa crisis was mercifully averted). 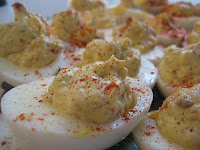 Everyone ate. Normally quiet only when eating, we kept chatting between bites about the absurdity of the teenaged of the species and the even greater absurdity of many of their parents. We told (I heard) tales of the hostesses father and his relation to the Dao of Pooh. Some left, some stayed, bacon was picked lazily from a plate as people got up and wandered around the house in and out of the remaining conversations.

When I left it was with the clear intention of a Sunday nap. Opening the blinds enough that the sun would hit me in just the right way. Warm light, large couch, full belly. Instead I got sidetracked to write this. But I'm not missing the sleep. I write the bitter, the biting, the sarcastic, and the silly all the time. I hadn't had a moment like this with food in a while, and it was the changing of the seasons and the timing of the meal that pushed it out, I gather. I've learned that it's best not to get in the way when that happens.
Posted by kitchengeeking at 4:58 PM