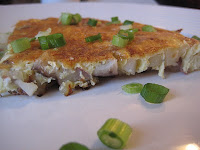 You've heard me write about properly cooking your eggs before. But today, I bring you a time when it is okay to cook eggs until they set.

Red potatoes, garlic, and yellow onion sputtered and crisped in cast iron while I whisked eggs together and pulled Parmesan out of the fridge.

The oven was brought up to temperature at 350-degrees in anticipation of helping eggs set just so and then moving to broil to brown cheese and egg alike.

The shitake were added to the pan and allowed to soften. 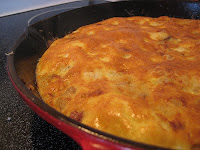 The egg was whisked again with some Parmesan and then poured over the potatoes and veg to set. More cheese was grated over the top.

The pan was added to the oven and the whole thing was cranked up to broil.

The crust was formed and became golden.

Scallions were sliced and put on top of a wedge of fritatta.

Just enough egg and cheese to hold potato and mushroom together on your plate.
Posted by kitchengeeking at 1:23 PM