10 Countries of Food and Drink: ONE DAY 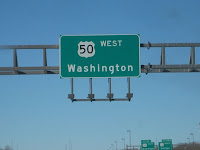 Or, "What happens with KarlJohn and I decide we haven't seen each other in too long and drag our friends along to multiple dive restaurants and cafes."

You get the first Kitchen Geeking/97-MealsPerHour crosspost here. I can't put this on one and not the other. Too many cuisines, too much fun. Can't just be a personal thing, and the MsAdventures were close in my thoughts all day long.

But yes folks, it was an EXPLOSION of food yesterday in the land of the Kitchengeek.

I started out at about 10:30 in the morning having driven in to DC to meet KarlJohn of WeLoveDC fame at his new cafe. Proud part-owner in an independent cafe at Constitution Square in DC called Pound Coffee. Find them on the Foosebook here. Being independent means they can do things like invent their own Nutella syrup for lattes and shop for fresh ingredients to have one lunch special every day and work through thirty different ethnicities in a month. Good on them! 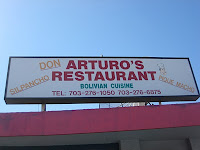 But we weren't in it for the District today. We headed across the river to what used to be the District until Virginia asked for it back. Arlington. Home of every hole-in-the-wall place you need (not really, but you'll get my point soon).

We were headed to El Charrito Caminante for tacos. You know, because it's what Karl and I do.

We got distracted, got ourselves seated next door at Don Arturo's Restaurant, and split a steak sandwich with fried egg and sauted peppers and onions while we were waiting for Karl's business partner Khalil. He called. He joined. He sat. He got up, said he didn't want to just sit there and watch us eat, and headed over to El Charrito. 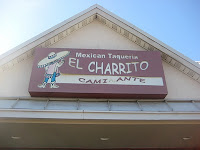 After our hefty but thankfully split sandwich, we joined him and proceeded to order tacos, plantains, papusas...and then yucca, which Karl can't seem to avoid in his life.

And we're chatting with Son/Owner Jose as he takes carry-out orders, rings up the throngs of customers stopping in, and checks with the kitchen on orders in process. Karl's partner was interested in how they carmelized the plantains and how they prepared their meats for tacos. Small business to small business. Great chats. We wanted Jose to bring one of the griddles he still had from his days as a Taco Truck driver to Pound to make papusas for the masses. He demurred. 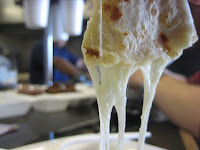 You can see here why we might have wanted him to show. DAMN THAT WAS GOOD! And the cabbage slaw that came with it was just tart enough from the vinegar and still crisp to provide PERFECT salty, crunchy, vinegary balance to the chew and cheese of the griddled papusa. I want more, and I kinda want them now.

But alas, we had plans...big plans. Falafel plans. So a two block walk down Pershing to make room for the next course ensued.

After stopping in the European Grocery at the corner of Washington Boulevard and Pershing then strolling into the parking lot of a small strip mall on Pershing to see what the Guatemalen place was all about (We didn't go in. We had to leave ONE rock unturned for the next trip.); we made it to Astor Mediterranean. A spotless, open, modern-looking seating area with an order at the counter style and a family from the eastern Med (Egypt actually) making the food. Mom was in the back getting ready to make some Koshari and then a whole lamb for a party later that night. We'll get there; because we immediately left without ordering.

Falafel was the goal. After more walking. We left to go check out Raja Bazaar. Recently moved to Pershing just off 50 from Quincy. Halal meats, Indian and Persian spices abound. Butcher in the back. 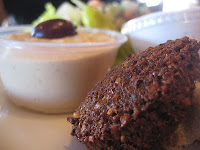 Okay, enough shopping for food, we were in it to eat.

Joined by a fourth, the amazing S-H To The. Missed that girl fierce since Orlando!

Falafel in belly we drop all but S-H's car and head across Pershing to Gleebe to hit Ravi Kebab so Karl could get chick peas. Which he did. But there were no seats. So we left and cross the street to...the OTHER Ravi Kebab. More modern and newly constructed. More seats. More food as Khalil and I each ordered the Special Samosa. Split open and doused with chick peas, yogurt, jalapenos and tomatoes. We ATE. And Khalil wrote down the ingredients in the chick peas so he can do his version. Which I will try.

Back in the car.

Back to Astor. Koshari's ready now. Mom comes out and finds out we've gotten a plate but she didn't put it together. So she wants to put it together the way she would have. So we get another plate. Rice, lentils, chick peas, pasta. All thrown together. Tomato-based sauce to add brightness and tart, but not heat. Ubiquitous Egyptian breakfast of champions. 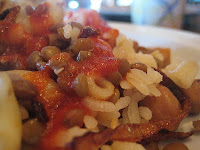 At this point it's about 3pm. And we're getting slightly full.

So I have the brilliant idea to go get coffee. And it turns out the marketing guy Karl and Khalil are working with has suggested they go check out Buzz Bakery, Coffee, and Dessert Lounge to look at their design and also try their baked goods.

OKAY. I GUESS. WE CAN GET SOME CUPCAKES.

As we're walking out to the car to head over to Alexandria I just have to turn to Karl, smile, laugh and say "This is EPIC!" as we gave each other a Frat-Tastic pound with the goofball 'explosion.' 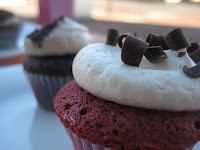 Then we get to the cupcakes. Mini cupcakes to be specific. Delicious little morsels of sweet cake with an amazing crisp top and melty-tangy butter-cream or cream cheese icing. The Buzz with the coffee icing. The Red Velvet with the cream cheese.

And then Karl goes and gets a sausage, egg, and cheese brioche. A lovely, puffy, French pastry filled with breakfast. Market research. We're calling it market research.

After Swiss, Bolivian, Mexican, El Savadoran, Lebanese (Falafel), Pakistani (Ravi), Egyptian (Koshari), and French (Brioche), Khalil had to go. He may still be in a food coma.

Karl, S-H and I were not done. Not at all. On to the Great Wall Asian UBERSUPERMEGA Mart. Size of a Super Wal-Mart. Flavor of real food. Turtles, eels, frogs. In the SEAFOOD section. Funny moment when you realize there are "Asian Foods" and and "American Foods" aisles in the store. Small restaurant/bakery too.

More funny when the lady walked up and asked me if I wanted to get new glasses in their just-opened optical shop..."These are Bulgari. I JUST BOUGHT these." So much for my high fashion moment. Came crashing down in the fresh mushrooms, bamboo, and pork buns aisle of the Great Wall.

S-H bolted up to Rockville. Karl and I continued on. To Present. Which was packed. And made us wait 20 minutes before they said they probably wouldn't be able to seat us. But Karl says the crowd is just catching up with the amazing food and I saw whole steamed fish and larb that looked rockin' and tender bits o' meat in sauces that were shimmering. So we'll try again some other day. 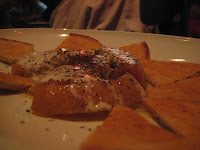 What to do? What to do? After standing around naming countries and cuisines for a few minutes, we stumbled upon an Afghan place that Karl actually had on his US Wishlist. Which was convenient for both of us, because it made thinking a moot point. Down VA-7 we go. South on 395. Off at Duke Street/Little River Parkway. Into the Total Wine center. Over to Maizbon. Real meal. Appetizers, salads, entres, and the severe need for gastric bypass or a restraint epidural. Neither of which is going to happen. Really. It won't.

My Aushak (steamed leek dumplings with yogurt and meat sauce over it) was good but lacked a bit. The dumplings (think ravioli) were totally limp and over cooked. Meat sauce tastied things up quite nicely. Karl's Kadu (pumpkin) was delicious, and his Keccheri Quroot (think rice porridge with yogurt, spicy red sauce and meatballs) was the hit of the night. New texture, brilliant flavors mixing around. Lamb chops on my plate were well seasoned and well grilled but cut a thin and as a result cooked well (not dried out, mind you, just not pink enough for me).

But after all that, I was DONE. After walking around the Total Wine for a bit, I hit my food wall. Karl will be back to that same shopping center soon (he was plotting routes from his place on the drive after dinner) because he noticed after dinner that three doors down from the Afghan place is an Egyptian place. And Karl loves him some Egyp.

Home Jeeves. Karl, to the car. Still parked at Astor, from SEVEN HOURS BEFORE.

I can get a pint and add Irish to the day?

Well...okay. I guess I can call it a digestif and crack double-digits on the country of origin charts today.

G'nite y'all. I'm sleeping off this food coma for at least...until Brunch on Sunday.

And for those keeping track of calories, there was a total of $120 spent today. At all locations, among all the foodsters. Mostly shared stuff all day. $50 of the total was KarlJohn and I at the Afghan place at the end of the day.