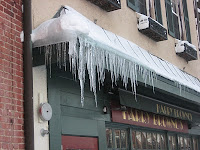 One might think this should be on the other blog. It's a restaurant after all. But as I was finishing off my dessert last night (at the bar, that's how I roll, and yes I got dessert which is rare, but it was Friday and payday and damnit the lemon cheesecake sounded good) I realized that Harry Browne's might end up as part of a 97-MealsPerHour post at some point (The Quiet One and I are regulars for work there), dinner last night was about the kitchengeek in his hometown, the local fancy joint, and a Friday night getting to know a Winter Menu just a little better at an old standby.

I don't know why Harry's has so few opinions, reviews, or comments on the UrbanSpoon, it's the only restaurant in town on State Circle. I suppose most folks want to go sit at the joints on the water because they're on the water, but there's better food and better times a few blocks off City Dock in the 'town' part of downtown (and another favorite will be written up soon for that same reason). But as you stroll off the water and up the hill to see the nation's oldest continuously used legislative space (that'd be the State capitol building y'all), take a gander at the menu and stop in. 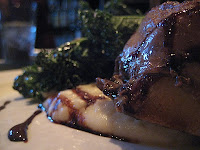 Harry's is many things, and many restaurants. It's the place where the legislature goes after hearings. It's the late-night bar for service industry folks and Johnnies too. It's a locals hangout and a fancy dinner; a glass of port or scotch and a classic Maryland crab cake done properly. It's also fine-dining service with white linens and a cold beer with snack mix at the bar to bring closure to a long day at the office. Sailors and servers, lawyers and students.

It is also a family joint. In two ways. Rusty's owned the place damn near forever. His father's memory is a part of everything he does, from running the restaurant day-to-day to the charity events in his father's honor. It's also a relatively long-standing staff, a family you get to choose if you're a local or just visiting town in the summer, crashing at the Calvert House for historic charm.

And recently, Chef Josh has popped out a new winter menu that has me wanting to go to Harry's for dinner as often as I can to make sure I can work my way through it. I'd go there for the regular menu, mind you. I'd go there even if it was just the bar. And this past week, it was barely just that as delivery trucks were not exactly considered snow-emergency vehicles that could break the City's 'no travel' bans. I beg to differ!!! 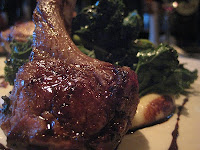 But just before the storms hit I noticed the new menu, and just after, I sampled again.

The Tempura Fried Lobster Tail with Arugula and Cream Cheese Grits is part fresh seafood for the winter months and part comfort food from below the Mason-Dixon. Just-cooked-through lobster with a thin and crispy batter presented beautifully with the tail fin still attached. Wild Mushroom Bruschetta with Brulled Talagio that MUST be a money-losing menu item for Rusty; but I'm unlikely to send a dish back for having too much talagio...ever. Crunchy bread, rich sauteed mushrooms, creamy talagio softened and draped over the dish.

Classics like the Caesar with classic (read anchovie) dressing, rich cream of crab soup, and the just-holding-it-together lump crab cakes are still available. But you can get those this summer...trust me. Move on to something exciting. 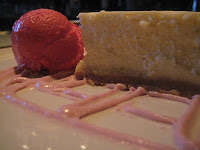 None of you are surprised that I started by ordering the Pork Osso Buco with Jalapeno/Cheddar Grits with Fried Onions and Haricot Vert. Fork-tender, fall-off-the-bone pork over grits that a chef wasn't afraid to actually heat up with some real jalapeno flavor.

Last night was the duo of lamb. Rack medium rare, shank tender. Only problem was the shank needed another minute our two to be brought back up to temp and a ladle of braising liquid would have been groovy. But the lamb tasted like lamb, not just like 'beef with slightly different texture and flavor so I can charge more.' No, it was L-A-M-B, and it was good. Kale was tender and had chew to it, as it should. Glaze was grand for sopping...and I love sopping.

Dessert. Yeah, I ordered it. I mean, c'mon. Mike at the bar tells you "Yeah, it's made here. We have a pastry chef," and he's talking about Lemon Cheesecake with Raspberry Sorbet? Uh-huh. I go there. Sweet/tart creamy cheesecake with enough lemon that you knew it was really there.

Get off yur' duff, DC and Baltimore peeps, and get yourself to Annapolis. Cantler's and Davis's in the summertime. So many other choices all year 'round. Including Harry's for a nice dinner when you're done looking at the water.

Posted by kitchengeeking at 1:50 PM

You forgot one key component of HB's: the brunch. Rarely do you see a brunch menu of that quality at those prices.

You know, after almost ten years in Annapolis; I don't think I've ever had brunch at Harry's.