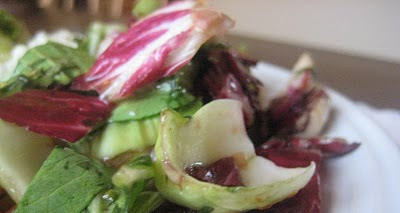 I have made a Radiccio/Endive salad in the past and paired it with an orange vinaigrette. It's tasty. Bitter and sweet salad. Sweet and tangy dressing.

Couldn't do it this time. Why you ask? Let's take a trip in the not-so-wayback machine.

Fast forward to the recent past. WholePaycheck, December 23. 4:30pm. That's right, I braved it. And found everything I needed except -- parsley and whole cloves of garlic (REALLY???) and endive. Fortunately for me, cilantro was next to where parsley, baby bok choy was next to where endive should have been and right next to the radiccio, and lemongrass was near the tarragon I needed for the main course of Christmas Eve dinner (more on the meal in toto in a separate post).

I'd never used lemongrass before. But I knew I liked it, and that it would pair well with my planned dressing, and that there should be at least one 'new' recipe on a menu heavy with traditional dishes. I was right, and you'll have a hit salad dressing because of it. Of course, since you know me, you know that I didn't actually measure any of this as I was making it...but we'll get past that.

The dressing was a blast, and the salad is one of those rare creations that, even after dressing, holds up through the fridge for the next day as well.

Simple. Mix it all together until some of that emulsion action happens. This ought to make enough for a medium head of radiccio and two good-sized bunches of bok choy.

There you have it folks (and peeps who blew up the Facebook asking for a recipe), fresh and tasty for the winter months and then some.

One addition could be some crushed peanuts over the salad. Seester and B suggested some chili-garlic grilled shrimp on top to make it a meal to itself. I support this kind of thinking.
Posted by kitchengeeking at 2:54 PM

Endive was missing in action in Charleston this weekend too.