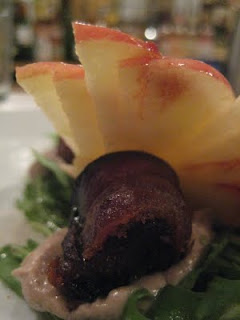 I can tell you all about the Bacon-Wrapped Medjool Dates and the Veal Cheek Agnolotti. I can do this because, well, you're not surprised I ordered them as we sat on a Saturday night just sipping wine and grazing, are you?

We were still full (sorta...just sorta) from Greek Fest (and when you see that post, dear lord Fetz doesn't even begin to describe it).

But Suzu and AS decided since we had turned in to Wine Market, and I put the turn signal on and waited at least a second and a half to see if there were objections, we should have a bottle of Black Ankle's 2006 Crumbling Rock. Maryland wine peeps. Cab Franc/Merlot/Cab/Pettit Verdot blend. And really tasty. These folks got it more than right. Check the bottle price (mid-50s) and you'll probably say there's no way you'd pay that much for a Maryland wine, right? Do it. Thank me later.It's not "Maryland wine you'd pay a bit more for than usual." It's a damn fine bottle of wine at the right price point, AND it's from Maryland. We sipped for a good long while amazed at the viscosity (it took a good minute for legs to break down from the line of wine left from glass tilt). And then it was gone, and we were sad, and Kelly brought us the wine menu back, and all was right in the universe one more time.

Next bottle was the Atteca, a 100% Garnacha from Calatayud (say it fast Kelli, say it 10 times fast!). Yeah, I don't know where that is either, but it was a large Spanish red that turns out will be sipped this evening when I make it over to Pops for Sunday Family Supper. Gumbo tonight, Mmmmm. In any event, and almost in any "case," the Atteca led to the first order of food, because why wouldn't it. 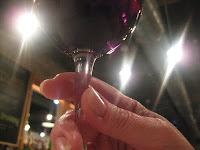 Needed something. Ordered dates. There you have it. For the low-low price of $7 you're enjoying applewood smoked bacon wrapped medjool dates with toasted walnut fonduta, arugula, walnut vinaigrette, and shaved gala apple. AS put it very well. There is not a flavor or texture on that that plate that isn't there for a reason. If you can stop yourself short enough to take just a minute (and it'll be hard) to make sure you get one bite with a little bit of everything; you'll be a happy date-eatin' fool. Sweet and salty, creamy and crisp, bright and deep. It was all there.

Pause for the tangent that ends up being the theme. It's fall, though you wouldn't know it today. The air is cooler and crisp, the nights bring muted cries of "oh I wish I'd brought my scarf/gloves/sweater/other warm thing." The new items we tried last night were fall. They were dates and veal cheek, bacon and red kuri squash, they were braised and they were warpped and grilled, and they were swimming with luscious, heavy red wine that made your heart warm right along with your belly. 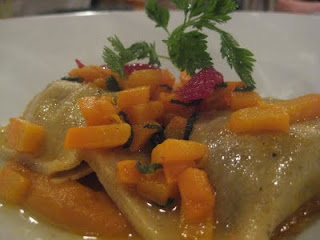 That was certainly the case with the agnolotti, which was paired through whim, chance, and good fortune with 2003 Brunello di Montalcino. You will want the $9 braised veal cheek agnolotti with golden raisins, red kuri squash, blood orange suprémes, and smoked oil. If you don't, call me, I'll fly with you and take them off your hands.

Little pillows of meat said Kelli, and god bless her for it, they were. perfectly cooked, toothy pasta pockets with braised veal cheeks that had melted. The flavors were smoky and rich and warm. You would want this in front of your fireplace. You would consider breaking in to my place to sit in front of the fireplace there. If you shared your agnolotti, I may agree to not press charges.

I saw the new scallop and snapper menu items...and we almost went for overdrive on the Saturday food-excursion. But just catching a glimpse was enough this time. Scallops, speck risotto, cranberry mostarda, sauted red kuri squash. Indeed, you are powerful as the emperor has foreseen. And there was talk of pork shanks (mostly because there was talk of lamb shanks earlier, but they were sold out of that special) and the pork shanks are served with curry noodles, and pulled brussel's sprouts (which is probably damn good and will likely need to get in my belly). 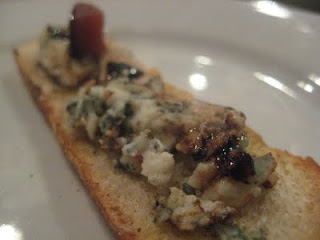 Instead, AS needed dessert, in the form of cheeses. And I will tell you it was a banner night. A banner night that had this guy try (no, I really wasn't a stinky cheese guy AT ALL), and not be offended by, and then try again, and then grab a piece of the toast points and smear more, a Spanish sheep's milk blue cheese.

(My sister has currently dropped her keyboard and may have to fight with the dog to get the mouse back, that is the level of psychic shock reverberating across the interwebs at this very moment.)

But it was goooooood. It was creamy, then salty, and there was a tang at the finish but the tang was a part of the cheese and not some billy club beating you over the head for daring to believe there was anything else to taste here. 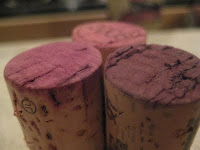 And we talked about food, and politics, and restaurants, and watched other folks come to the bar and wait for their table and move on; or we watched them sit at the bar and order and eat and wonder if we should have ordered what they ordered; and a procession of men with elbow patches on sport coats and glasses that are clunky, and retro, and hip chatted amiably with smiling young women who were glad to be done with a week and able to order just one more 3 oz. pour of that Pinot they like so much (it's probably the St. Innocent).

There wasn't a distinct end to the night, we just couldn't order anymore. We had chatted, and sipped, and dined for a day, and with one final 3 oz. our ourselves, Suzu the Chianti, AS the Zinfandel, and I the Petit Syrah, it was all over but for the picking up two bottles on the way out the door.

Posted by kitchengeeking at 10:24 AM

Email ThisBlogThis!Share to TwitterShare to FacebookShare to Pinterest
Labels: about food, friends, restaurants