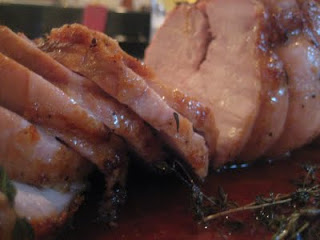 That was what I came up with when I started thinking about my Thanksgiving post this year. Last year was such an exhalation for me. Such a nostalgic panorama. Winterberry and Milkweed. Creekbeds and hollows. Turkey and stuffing.

This year was the city house. An urban Thanksgiving where you travel, and then eat, and then relax, and then travel again. Same crew. Delicious food. Instead of walks by the creek, I did the "sleep in the chair" with football lulling me to sleep.

Mom and I still chatted food and politics, mostly food. Ms. S still sorted through all the china and service and made sure the proper pieces were on the table for our meal.

It was clearly the Thanksgiving of the iPhone, with John, Bec and I all tweeting and Facebooking our Thanksgiving cheer all over the world. 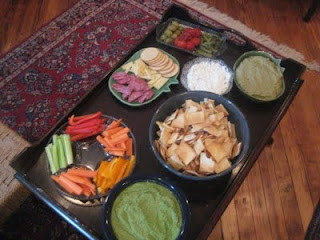 And the meal, oh the meal. It was brilliant.

We started with the appetizer-coffee-table-of-doom. Walk with me.

Top left is the olives, pequio peppers, and gurkens. clockwise we go to the avacado-cumin dip (200 calories total in that bowl, chow down), the cottage cheese with garlic and chives, then on to the vehicle du jour in the form of WholePaycheck's sea salt pita chips. Moving along to my curried-pea dip (real Indian garam masala in there. Thanks Momma D. Shame you had to fly all the way to India to be able to afford the medical care you needed. Glad it was a roaring success and that I got the added benefit of real garam masala). Veggies for more flavor delivery vehicles. Celery and curried pea dip was popular in my world. Sausicon and Gruyere with water crackers rounds it out. We snacked right folks. 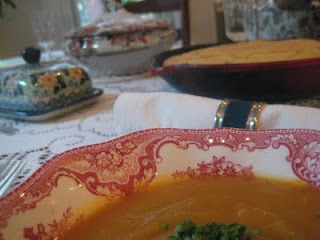 Soup course was the kickoff for the 'sitting at the table' portion of the meal. Butternut squash soup. Served with warm bacon-scallion cornbread in the cast iron (I am nothing if not predictable). There was, shockingly, NO cream in this soup. And it wasn't missed. Thick and luxurious. Sweet as it should have been. Bright parsley for accent.

This was part of a Cooking Light menu that Mom ended up making most of because there was one dish that hooked her. And it wasn't the main course that did it. It was the roast side. It will remain a secret for a few more paragraphs.

The non-turkey this year that got plucked from the pages was Brined Pork Loin w/ Brown-Sugar Bourbon Glaze. Yeah, I licked glaze off my fingers when we were going over the menu in the kitchen when I first got to the house. No, I'm not ashamed to admit it. 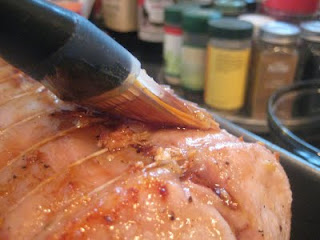 If you can look at that brined hunk of porky goodness gettin' the business from that brush with sticky bourbon brown-sugar reduction and tell me there isn't a place in this world for 51% corn-mash whiskey aged at least 18 months in charred oak barrels; I'll tell you a whole list of other blogs you can go read to either ignore this one or read up on why you're just missing out. Trust me...it tastes good.

Mom went deboned instead of the bone in pictured with the recipe because...well, because the local guys who provided the store with the local pork loin had boned theirs. The store had not boned the stuff they get from wherever. Since the farm had done it for the store, and it didn't cost them any labor, the boned pork loin was cheaper per pound than the bone in...ponder...you pay less per pound at this store for local pork that did not have bones...and MORE for pork whose origin was 'wherever' and for which you were paying for the weight of the bones...that gets a hash tag fail in my book. But we came out on the tasty side of it, so I'm not going to complain too loudly. 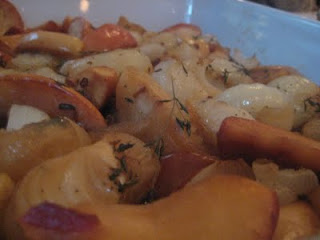 It was set up next to the BEST dish on the table. The BEST dish of the day. The WINNER (Unlike the Doberman in the National Dog Show hosted by the Kennel Club of Philadelphia who looks just like my nephew Gus and who was ROBBED by the Scottish Terrier) was the roast Gala apples with Cippolini onions and Applewood smoked bacon. It was so sweet and tangy. There was just the perfect chew and smoke from the bacon. It paired will with everything from the pork and glaze to the potatoes and horseradish butter.

Compound butter, the brine, a glaze, a salad dressing (that never did get on the table because we never did get around to eating the salad course). As we sat around the living room after dinner waiting for enough time to pass to at least pretend we had room for pumpkin pie, Mom got a wry smile as she talked through the meal and said there were just so many 'sauces' in the menu... 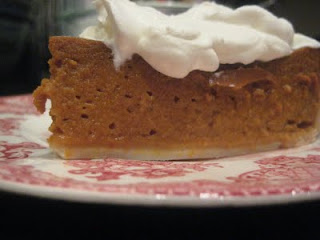 Put it all on a plate and sit around a table with family and friends. Chat about what's happened since the last time you all sat together. It will likely have been too long. There will probably be stories you lean into and for which you prop your elbows on the table. I got to tell Mom about the letter from her Aunt Ida to he mother in the spring of 1946 telling of finding a new apartment and the furnishings in it in Washington, DC after she and my great-uncle Milt moved there after the war. It was a tattered letter that was behind the roll-top on grandpa's roll top desk and I found it when I had to take the roll-top off to get the desk into my new place. Some things are just...well, they just are.

It's over now, and there's still the weekend. Bec and John headed home this morning by way of outlets in Leesburg. The leftovers will be gone by the end of the day. It's strange to me today that this holiday that means so much to me, that I take every year as a chance to stop and reflect before I give thanks, has passed me by again. There was good food and good cheer. My house was a home where family come to visit for the first time. And we all slowed down and smiled a little more easily. In the end, that's what I get out of it all.

G'day y'all, and enjoy the rest of your holiday weekend.
Posted by kitchengeeking at 1:10 PM

What can I say? I can only drool! Your feast looks fantastic. :)