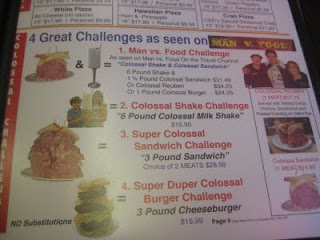 Not a typo. Really. "Delly." Annapolis institution. Tight spaces, narrow aisles, small tables. GOOD FOOD. It's the Main Street Deli that a town south of Mason-Dixon isn't supposed to have. Grits and good corned beef on the same menu. And we love it.

There's Web 2.0, and then there's Chick n' Ruth's. With their locals page full of photos of people at the shop, at a charity tournament the delly runs, or just photos of friends of the restaurant out on the town. A photo album. On a restaurant website. And it's not about the shaved-truffle-parmesan-crusted-pistachio-dusted-foam atop your bacon-wrapped-marscapone-infused-lavendar-pear-turducken-wing with mint-julep-chayote-tomatillo-reduction-shooters.

It's just a deli run by a family who loves to run a deli, know their customers, and recite the pledge of allegiance every weekday morning at 8:30 (weekends at 9:30) because that's the tradition they were passed. Even if it's not your style, appreciate for a minute in this world of Black Fridays and Big Box stores that have their own electric substation attached to the back of the store that there is a mom, and a pop, and they'll still walk by your table and see if you need a reheat.

Here's what they say about themselves:


Chick and Ruth Levitt moved from Baltimore to Annapolis with their three children in August of 1965. In taking over a sandwich shop on Main Street, Chick was to institute something that had diminished through the years. Most people had forgotten and young people have never known the "Ma & Pa" establishments.

Ruth passed away June 20, 1986 from cancer. In 1988, the Scotlaur Inn was opened above the Delly. Chick passed away January 22, 1995. Chick is now back with his wife & girlfriend, Ruth. The memories and traditions of Chick and Ruth live on with Ted & Beth. They wish to thank their friends for their patronage in the past. They hope to continue to serve their usual fare of wholesome food, friendship, and lodging in the future.

I need to expand on the menu sometime. For 10 years of eating there, I've had a surprisingly small percentage of the menu. But for me, it is at heart a breakfast place. Creamed chipped beef over toast with Delly potatoes. Corned beef hash and eggs. Basted because neither Chick nor Ruth poach an egg. I've been meaning to tell you Chick. And you Ruth...poach eggs please? I'd love you even more.

Can anyone say pastrami and cheese omelet? You. You in the back. You can say it? Okay, good.

Pancakes the size of houses (big, fluffy, round houses). Real butter. Aunt Jemima on the tables so you really do feel like you're eating at home and it's one of those rare Saturday's when you don't have a game, a practice, or a scrimmage. And Mom feels like making pancakes. And you can thumb your nose at that 'real' syrup stuff. That's for chumps. Your Auntie knows syrup. And your Auntie is Jemima!

Sandwiches and breakfasts are named after local and state politicians. The current Mayor is cream cheese and olive on toast. Ummm, can the new Mayor's swearing in ceremony in early December include a proclamation of menu change? Just sayin'...not my style.

Senators, Delegates, Mayors, Governors, Council Members, and Golda Meier all have their signature dishes at the Delly. You get elected, you get a sandwich. And there are plenty of menu items from which to choose. Kosher dogs, corned beef or pastrami, Clubs, eggs sandwiches, Salisbury steak. All there.

Posted by kitchengeeking at 10:38 AM