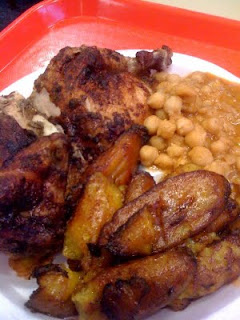 "Oh my god, I can smell it." That's what I said a full block away from Super Pollo before I even knew exactly where it was. It SMELLED that good...OUTSIDE...A BLOCK AWAY. I'm serious folks, it smelled so good. Like the barbecue you drive by on your way somewhere else when you knew you'd be happier in life if you were friends with the people making whatever smelled like that?

If I lived here, I'd eat at Super Pollo once a week too, Karl.

There's a rack full of chickens slathered in Peruvian rub churning and turning non-stop as you order at the cafeteria-style line. I didn't eat slowly enough to differentiate spices and herbs in the rub. This looks about right. Just go get one yourself...First up, how much chicken? 1/4 white or dark plus 2 sides for $5.05 (!!!!NOT a typo!!!!); 1/2 plus 2 for $7 and change, whole chicken for not much more. At 6pm on a Friday there's a steady stream of folks just getting off the metro and running through Super Pollo to get dinner on their way home. Can't blame 'em. 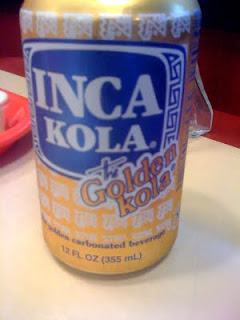 I was a half-chicken kinda guy last night. In part because, as you already are aware, I have no real concept of or desire to learn portion control. But also here because I really, in that split second between Karl finishing his order and me starting mine, I could not decide between white meat and dark meat. So I ordered the smallest portion that got me BOTH. That's smart, peeps. Just plain smart. And worth it. The meat was ridiculously moist and tender, the skin was equally crispy and slathered in the Peruvian rub. Two dippers with. One was chimichurri like. Hot with herbs and peppers. Second was mayo-based and slightly sweet. Close to what every honey mustard should ever be.

Sides ranged from chick peas with a cumin/coriander spice, fried yucca that looked like battered/fired bread when you bit in, fried plantains, and a mountain of rice and beans. The chick pea, as Karl rightly pointed out, is an amazing creation. And so good in so many forms. From a spicy channa masala over basmati in India to a cool, smooth, garlicky hummus in Lebanon to a cumin-scented side-dish in Peru. Plantains were sticky with carmelized goodness and it was a measure of my friendship with Karl that I permitted him a sample. Well, he introduced me to the place, so I felt slightly obligated too.

I would highly recommend getting up right now, going to the metro, getting the orange line, and getting off at Ballston. If you don't I will beat you to your rightful spot in line. While Monday night is already spoken for with dinner joints, I'll have to drive back through the area on my way home on Tuesday...Karl, you up for more Super Pollo???

Posted by kitchengeeking at 12:43 PM

I had something similar in Chinatown and it wans't nearly as good as you made this sound. Kind of bland. I'll have to check this out if I make it over to Arlington.