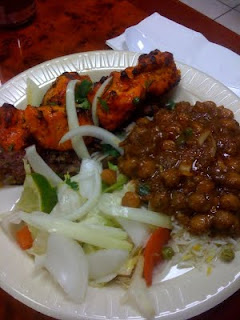 This post combines some of the best bits of always having food on the brain. A new restaurant that serves a strange and distant land's food and some of your favorite foodie peeps. First and foremost, we all wanted to go because CassiBob and I had never been and we've kinda gotten used to KarlJohn gettin' the lowdown on the righteous ethnic cuisine in the DC/NoVA tip. I've got the MD burbs and Bal'mer covered. Secondly, I have to admit to a not-surprising fascination with food grilled on sticks. And I wanted to see what was similar and what was different between Pakistani (which I've never had) and Indian and Afghan (lucky enough to have checked off those boxes on the foodie scorecard).

Ravi's just what it sounds like, a joint with all types of kabobs. From that part of the world where the Indians and Persians got their food on and the Europeans, Arabs, and Asians eventually traveled around. God bless spice trading in the Middle Ages for bringing all this food together.

Since we'd never been CassiBob and I each got an app. She went Samosa, I went Special Samosa. And DAMN was it special. The special was an open-face Samosa (potato, pea, standard fare) SMOTHERED with stewed chick peas, onion, a sweet/hot sauce, and cilantro...lots of cilantro. And blessedly it was large enough to share without hesitation. CassiBob thought the Samosa was okay, and I'm guessin' she might have had a higher individual opinion of it had my special not been right beside it.

For the entrees, we get into serious Meatopia. There are chicken marinated in yogurt (CassiBob), ground beef with spices (CassiBob), whole lamb chops grilled to perfection (ThisGuy), cubed beef and lamb on the spit, and daily specials cafeteria-style including a lamb and lentil dish (KarlJohn). Each dinner comes with two sides and the staff automatically recommends rice and chick peas and a hefty piece of bread (In the Indian joint, it'd be Naan. Not sure if there's a Pakistani food word that's different). CassiBob and KarlJohn went there. For a little more variety on the table, I tried the rice and some black-eyed peas. Each plate also accompanied by a small salad.

Take note. This was the best lamb chop I have ever eaten. It was perfectly charred on the outside and medium on the inside. You KNEW it was cooked with fire. And you loved every blessed, bone-knawing minute of it. Yes people, if you get meat served on a bone; pick it up. Don't you dare waste that food. 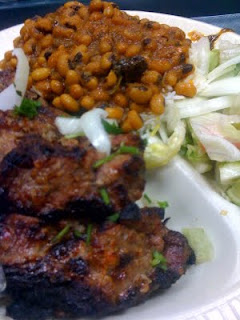 Tangent. Karl and I had that great conversation about the chick pea at Super Pollo. So versatile in so many different cuisines from Italian to Peruvian to Indian and Lebanese. What a great food. Here at Ravi I was struck by being able to same the same thing about the black-eyed pea. I've slow-cooked mine for years with a ham hock and garlic/onion. These guys were slow-cooking theirs with cardamom and coriander and the same garlic/onion mix. So much more that we have in common; because I have to believe that some Southern dude in fatigues and some Afghan dude away from home are both remembering long-simmered greens and stewed black-eyed peas. Not getting too far out there, just sayin' I bet it happens a lot.

Staff/Crowd. Look, I'll be honest here. I'm pretty 'merican in appearance. And I love it when I'm in a food joint from a galaxy far, far away and can tell. It tells me one thing: People who grew up eating this food out of there mother's kitchen think this is food on which it is worth spending money. And I have to say I feel lucky to walk into places like Ravi. The crowd was all happy, the food was flying out at a good clip into the waiting arms of a husband and wife, co-workers, and native friends catching up at their local joint that serves family-style bowls of several meals.

Staff could tell as soon as we walked in that we were new and helped out immensely. Dude sitting at the four-top waiting for his togo? Yeah, polite move-ask from the staff so we could grab the table. Behind the counter? Here, look over some menus. Yes, you order up here then we'll let you know when the food is ready. In this tray? That's the daily chicken special. Here's the lamb. Ready to order? Sure. Yes, the Ravi Speical? Of course. It's rare when I notice a rapid-fire ordering interaction that much, but this one worked very well. Perfectly timed 'everything okay' during the meal. Eye contact as we were heading out and a pleasant 'how was it?' because I think he really wanted to make sure it was good. Amen to that.

Posted by kitchengeeking at 3:06 PM

you like complements your physique. put on it and look at your do it yourself within of the mirror. actually should you are tall as well as your guitar neck is slender, a choker or perhaps a collar necklace created of handmade beads is most significant for you. you'll be able to also obtain a prolonged one which could possibly be around eighteen inches in length. within of another hand, in the event that your guitar neck is short, its most significant actually should you can obtain a necklace that could possibly be about twenty-three inches long.