A double-treat for you here, since I've already done the Lentil Soup recipe way back in my FIRST post ever two years ago this weekend. Not only two meals in one post, but a theme. That's right, we're goin' Meta on Sunday mornin'. I went there. You have that crap song stuck in your head. We'll all survive. Follow...

I have a collection of wonderful food memories that I didn't realize would be so important to me when I lived them. Isn't that always the case with time and memory. But looking back, these were always the memories of family I have had, and I didn't until recently put together that the meal was the focus.

I know now that there are four or five events or periods in my life that are the foundation of the cooking bug. 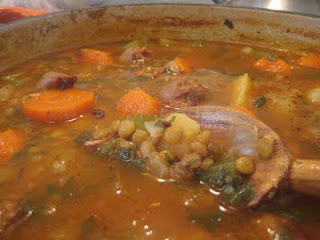 Sifting the flour and salt and baking powder for Date Nut bread when I was six or seven and chopping the potatoes, celery, carrots, and onion for the lentil soup when I was a little older.

The year I spent living with Mike and Craig my junior year when we had a real kitchen and cooked real meals (including the most inebriated bratwurst/sauerkraut dinner ever prepared by a German Studies Senior Housefellow in Conn history).

The first time I ever cooked a holiday meal for anyone (Hot Roomie #1 and I cookin' for her rents and broder Thanksgiving 2003).

The first time I ate foie and cabeza at the taquerias of Anaheim.

The best of times in places that hold magic. Remembering Uncle Paul giving the grace and Aunt Juanita passing me the lemonade. Playing in grandpa's roll-top desk while watermelons were sliced and sun-tea brewed on the back porch.

You get the picture. I think about family and friends and connections and places. And I remember them with great detail. And I remember the food. Not in a trite way that is simply a catalog of meals. That happens in the modern twitter-world, and I'm a part of that. But so long and I know there's more to it than that, I don't mind living in both places simultaneously.

So I remember peeling and slicing carrots. And potatoes. I probably asked what bay leaf was a time or two. There was always that one grocery trip when Mom would say the words that unlocked Fall. Real fall. "I need to get some lentils." Because there was only one reason we ever had lentils in our house growing up. There are more now, but this was the only time I recall as a kid. It was time to get to making a pot of lentil soup. Dad loved it, it was one of those recipes that Mom could do in her sleep and was flexible enough in its preparation that the intervening son, daughter, cat, or other house crisis would not impede its progress.

It was better the next day for breakfast, or lunch, or dinner, or all three. And there was almost never enough sausage bites in it. Like trying to make enough mashed potatoes for dinner on Saturday night so we could have potato pancakes for breakfast on Sunday. You just always had that last bowl of soup left that was essentially gravy and lentils with perhaps a stray chunk of carrot. I relish that bowl now, I was supremely disappointed in it as a surly 9-year-old.

I make it every year, usually twice a Fall/Winter. But it always seems to taste better the first time I make it in a new kitchen. Helps that I get to cook it in the Dutch Oven Mom bought for me for my birthday last year. Keeps the connection there. 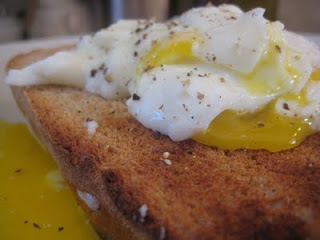 And then there was Saturday breakfast. The first real glimpse of the weekend for the family. Friday night now, but then there were too many activities and tired-people at the end of the week and Friday was a 'out-to-eat night.' So we'd wake up on Saturday morning and, barring morning sports requirements and my parents 'I hated it then and realize its wisdom and benefit now' Play-a-Sport-a-Season rule, we'd have soft-boiled eggs on toast. Then this week the genius peeps over at Serious Eats wrote this marvel on eggs.

I've moved to poached as a favorite egg prep since those days, but there was a moment this morning when I was sitting at the old pine oblong table in the kitchen at the house on Citadel and there was a sauce pan of water still steaming and two eggs some rye toast on my plate. Mom and/or Dad sitting cracking there eggs with the back of a knife letting the yolk run over the bread and then scooping the white and adding a bit of pepper.

Recreated, I think because we both just remembered it so clearly, by Dad and I when I lived with him post-grad school. Saturday and Sunday mornings. Two bachelor roommates. Two eggs and some toast. Easy on the brain while you got your coffee on.

This time I baked the bread too. Joy of Cooking's quick white bread one-loaf recipe subbing the last cup of flour for whole wheat flour. I'm not sure I count myself a baker yet, but I'm getting the rhythm of the mix, knead, rise, knead, proof, roll, rise, bake.

I'll get that second-day bowl of soup with bread here in a minute before I head out to watch some football with a pal on his birthday. Might bake some mac n' cheese tonight to have options for the week at lunch.

I'm still facing a daunting list of chores to get through today after the trip to the b-day shindig, but at least I'm well fed in food and memory.
Posted by kitchengeeking at 11:39 AM

Email ThisBlogThis!Share to TwitterShare to FacebookShare to Pinterest
Labels: about me, Cooking, family, family recipe

Dan, what a comforting post. I, too, along with many others I'm sure have favorite memories with family and friends centered around food.

Christine Aguilera blaring on the stereo and the thought of the perfect poached egg.