A Simple Meal for a New Kitchen 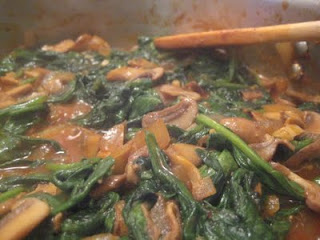 Dinner plans were made and broken in this here fast-movin' town. By that I mean that I was going to have the new gang of what I hope will become Lazy Man's Supper here in the low lands and it got interrupted by some folks working late and other having to get to work early and etcetera, and etcetera. I'm not upset, because I have this suspicion that MB, Sqirrel, Ms. K, JRowr, Meester Haaaaaaaaaahn, and 'lil miss C will come over soon and often for food.

But I needed to cook. You...reader who hasn't been here long and thinks this is about restaurants...scroll back...further...further...there. Yeah, I may spend the rest of my life trying to recreate that dinner. I think Chez, E, Slim, Tim, Mia, and whoever else was there will likely agree...if they can see back through the haze of wine to remember it...that's why we blog, for posterity!

Tangent(well, that one anyway) behind us, I'll move to the food. Which was chicken, and spinach, and mushrooms, and potatoes, and butternut squash, and baguette (which ended up forlorn and unused), and garlic (which did not), and some stuff from West Virginia (Yay unpacking) and some stuff from Maryland (Yay local grocery store). But the plan for the party was multi-course, and my tired tookus was not doing multi-course. 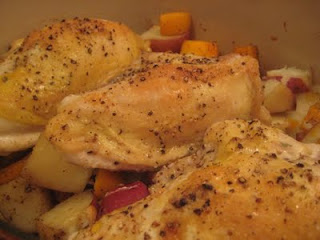 Now I started out blustering (internally, so you're the first to know about it) that I would complete the planned meal, people not actually showing up to eat it be damned.

Then I got 1/3 of the way through the prep and saute for the app. And realized I could put the spinach from the side dish in with it...and do what I was already going to do with the chicken, which involved the potatoes and the squash and some cumin...and then I'd only need one other pot and could get busy with the wine uncorking...

...Seriously? Some of you thought the wine wouldn't happen? Whatever. Moving on.

Do this. Take some red potatoes and some cubed butternut squash, add in some shallots if you're not a moron who forgot to peel and chop them. Toss with some olive oil, cumin, salt, and pepper. Throw in the bottom of a dutch oven (or roasting pan). Set your split chicken breasts on top, dash more oil, pinch more salt, crack more pepper. Lid off, into the oven. 400 degrees. How long? Really? Until it's done. 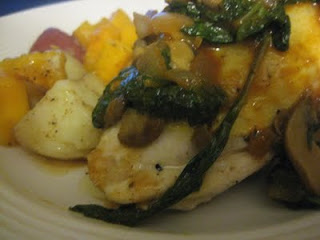 Sidebar tangent #2. People think there are two types of people...1) those who cook enough to merit purchase of an electric thermometer and 2) those who don't cook enough so there's no need.

Really, there are two types of people... 1) those who cook at all and realize that having ALL of that guesswork taken out whenever you do cook is worth $15 and making sure you keep AAA batteries in the hall closet and 2) those who think that they should just be given a time because that is more convenient. I am one of the former. If you are one of the latter, pray for more federal bailout money for the culinarily challenged.

Altitude affects how long something will take to cook in the same model oven. The same cut of meat can take two different times even if cooked in the same oven at the same temperature one month apart. Even the same brand of oven at the same altitude can fudge your dinner. Ask hardcore bakers, every oven on the planet is different. But a thermometer? That's forever on temp.

Back to the show...well actually, after that tangent there's not much to tell. The mushrooms, onions and garlic were sliced, diced, and minced respectively and then sauted until most of the liquid was released and cooked off. Then some tomato paste was added to the pan and cooked a bit. Then some chicken stock deglazing happened. Then I added in the spinach and cooked it down until there was a little rust colored sauce with my mushrooms and spinach and poured it over the crispy chicken skin on my lovely plate.

I'm sipping on some Gnarly Head Old Vine Zin because it is a grape I love with qualities that invoke a fall evening...as in, it's a big glass of fruity jam that was the $8 manager's special. I love fine dining, and even recreating it in my kitchen from time to time. But a Monday night when it's me and the new blinds I have to install? No, no fine dining. Just good food.

G'nite y'all. More (HappyHappyJoyJoy) soon.
Posted by kitchengeeking at 8:04 PM

Right on! That did not suck at all. I smirked the whole time I was reading, I love the way your writing style is developing. I'm a huge fan of your digression. It was great to see you, as brief as it might have been.

Yay smirking! Now I can say I truly accomplished something today. Agreed on too short a visit. I was in no shape to porch it Saturday night. No omelet monstrosity would have appeared that night. I'll cruise back in sometime in November.

I eat! I love to eat! I'm so happy we've met. Please give me another chance. Best nights for the crew are Sundays. Can we try a Sunday sometime??????? PULEASE!!!!!

I can rock out the Sunday supper. Maybe even this Sunday. I think I'm in town (shocker), and that gives me the chance to spend HOURS in the kitchen (and no, no dear readers, that wasn't sarcasm. you don't know what sarcasm sounds like on the internet? eh, someday you'll see).

I'm salivating quite early in the morning now!

Dear Dan,
You clearly ARE the man. I so heart you and your blog.
Love,
Sarah ;)