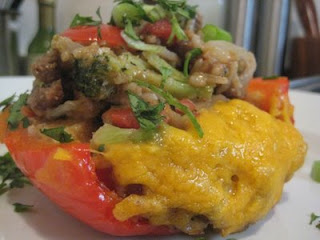 I had peppers. I had beef. I had bacon, rice, diced tomatoes, cilantro, scallions, cheddar cheese, broccoli, salt, pepper, garlic, cumin, chicken broth and oil. I had pots and pans and a rice cooker. And lordy, lordy, did I have a need to get in my kitchen to do some geeking so some food could get in MY BELLY. This, dear readers, means you will get a mostly-recipe post here today.

2. Steam the broccoli for two minutes until it is partially cooked. I peel and chop the stem of the broccoli too, especially in a recipe like this where it will add texture in the stuffing. Remove the broccoli to a bowl.

3. Remove the tops from the peppers, discard the stem, seeds, and membrane. Chop the tops of the peppers and reserve. Place the peppers in the pan you used to steam the broccoli and cover. Let the peppers steam for about 2-3 minutes. This lets them soften enough to stand on their own when stuffed. Makes for easier baking and a better texture to the finished product.

4. Saute the bacon until rendered and slightly crisp. Add the onion, ground beef, salt, pepper, and cumin. Cook until the beef is browned. Add the tomatoes and chopped pepper. Cook to blend for about 2 minutes, then add the broccoli to heat through.

5. Pour the beef mixture into the bowl with the rice, add 1 cup of the cheese, and stir through.

6. Place a small pinch of cheese in the bottom of each pepper and then spoon the stuffing in. Pack in as much stuffing as you can, pressing down to completely fill it. The walls of the pepper are pliable, remember? You can press quite a bit in.

7. Place in a deep-walled baking dish (I used a loaf pan with three peppers in it) and add 1/3 cup chicken broth. Cover with aluminum foil and bake at 350 degrees for 30 minutes.

8. Remove the foil, add the rest of the shredded cheddar to the tops of the peppers, and return to the oven until the cheese is completely melted.

9. Garnish with cilantro and scallions.

You'll note from my picture I cut the peppers in half before serving. If you do this, don't make all eight peppers, you'll want to reserve some stuffing to scoop onto the pepper once you've sliced it.

I added peas into the stuffing I had left over the next day and made a meal of it. I should have added peas to the original.

You can make this in endless variations. Check out the recipes for stuffed peppers at Epicurious, Food Network, Google searching "recipe stuffed pepper", and AllRecipes.com.
Posted by kitchengeeking at 10:59 AM