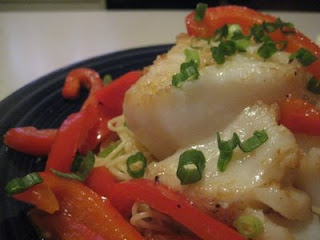 So after asking for your help, and getting my geek back on, I actually went shopping last night for multiple meals. There were some pantry staples: cumin, bay leaves, onions, stock, dry pasta. There was some freshness: Cod filet, split chicken breasts, red peppers, jahrlsburg, limes. There was some list-drift: Klondike bars because we had talked about them at the Red Carpet the night before, fish sauce so I have it, Stouffer's French bread pizzas because they're awesome.

And no, I really didn't know what I was having for dinner last night when I went shopping. I didn't have a list (but don't always worry about that now since I like the "what looks good philosophy"). I didn't even have an ethnic desire.

But I saw cod that looked good. And I hadn't cooked angel hair pasta in a while, and damn if they didn't have red bell peppers at $1/each. Little garlic, little oil, little salt, little pepper. Water, one pasta pot, one 12" all-clad skillet, one bowl, one plate.

There was a lady behind me in line who only had a few items. She looked over my monstrosity of a grocery cart and said something to the effect of "So nice to see a man who knows how to shop." Small talk ensued and she asked what I was making tonight. "I'll probably put some of that cod with some of that angel hair and a couple of those peppers."

At that point I think she would have married me off to her daughter if she had one. I might have gone along with it. I was feelin' good about myself and my kitchen-time.

A few red lights later, I was home and STUFFING my fridge and freezer with the bounty of my trip and getting into full geek mentality.

I will not tell you how to cook pasta. Just remember to salt the water. Please.

Saute the peppers until just beginning to wilt and transfer to a bowl for a bit. Oil, salt, and pepper here folks.

A dash more oil, and in goes the cod over medium-high heat. DON'T MOVE IT. Let it go. Three minutes or so. When the bottom begins to become opaque. Another tablespoon of oil (trust me), three cloves of minced garlic (the extra oil keeps if from burning in the oven), into a 350 degree oven until it reaches 135 degrees.

You do have an instant read, electronic thermometer, right? No? Geez. Okay, in the oven for about 12 minutes until the top is just beginning to flake.

Remove from the oven, place the cod on a bed of the pasta on your plate. Put the peppers back in the pan.

Please remember to use an oven mit or towel on the 'still at 350 degrees pan.'

Saute the peppers again in the oil and now roast garlic until it's warmed through again.

Chop up your scallions; or parsley; or even cilantro, dill, or mint. Garnish and Gnosh.

The fish was fantastic. Flaked apart into meaty little chunks of goodness. The sweet peppers and mellow quick-roast garlic were a great compliment and the bite of the scallion mingled with the chew of angel hair.
Posted by kitchengeeking at 1:21 PM