It's About Food...
Originally uploaded by kitchen geeking
....because I will eat after a ride up to Wheeling in this!

[UPDATE]The food was good, but not great. More time and we would have hit DiCarlo's in Elm Grove. More thought and I would have taken MP to Coleman's fish market for a fried fish sandwich to instill pride in any Catholic.

But we hit the River City Aleworks. I like the place, and have eaten there a few times over the past few years. MP was initially skeptical, but his tuna steak sammy with wasabi mayo on artisan ciabatta won him over. My photo skills were not skillz, and so you don't get to see it.

I went Steak Salad after being warned off the pit beef by my server. Good for her. I thought it sounded good. She let me know it was going off menu soon and was not the same recipe it had been. Kudos.

She did not tell me their tea was powder mix, or appeared to be. Eh, c'est la vie. It was wet. 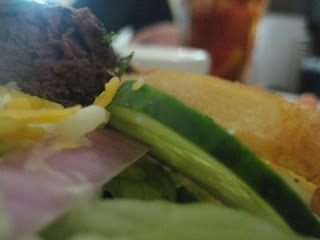 I kept the dressing on the side and dipped, you health-Nazis! (I mean, I'm not paranoid or anything...just sayin' here). I ate MOST of the salad...

The pub's a nice spot, bar area, restaurant, private rooms, seafood specials for the crab-lover in you. It's a big open space with nice hardwood in the restaurant. The menu's standard-fare pub grub and 'nice' pub-grub.

Since it wasn't my first trip you know I'd go again. Need to get some of the beer next time and do a proper review. But for the only meal I've eaten today, it did pretty well.

I have eaten lunch there twice and really enjoyed it. It is pub-grubish, but more upscale. Perhaps Stanton would call it "Artisan grub".