Pink Beer in the Afternoon 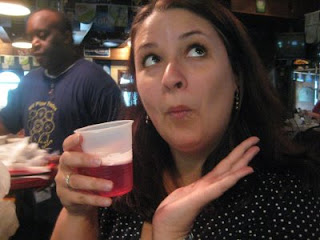 That's right. The new 8-spout strait-tap system at Sam's has some strange and exciting brews. My candy-@$$ has been swilling draft PBR like it wasn't already out of style after being in style for having been out of style for years.

Maybe if I'd been paying more attention, I might have tried THIS sooner.

Wasn't as excited about pink beer as I should have been until Bethie arrived and noticed it. But when Ms. Bethie gets excited about something, you do too. It just works that way.

P.S. - Magic Hat? Beer people? TURN THE MUSIC OFF ON THE WEBSITE. Gads I HATE sondtracks to the interwebs. That's what MY friggin' iTunes are for, got it?
Posted by kitchengeeking at 2:57 PM

pink beer?!? All my wishes have been answered.

It's made from beets. Yeah, beets. I don't like looking at beets when in solid form. Pink, beet beer freaks me out. Iron Trav loves it!