The Food of a Younger Land 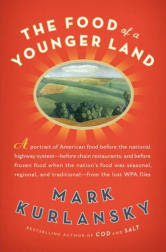 What a great find.

If I ever get done with Omnivore's Dilemma, this goes to the top of my list for next.

Big hat tip to Homesick Texan for the find.

I wonder what the WV recipes would be from that era. I bet my grandma and her sisters made it better than most whatever it was.

Reminds me that my Great Uncle is a tangent to this book's creation in my family. Milt was an administrator in the State Park service and National Forest for years. Ran across a lot of the old CCC Camps in his day. So he decided to write about them.

This small publication will serve as an authoritative ready reference to the Civilian Conservation Corps camps in West Virginia. The brief introduction describes the camp structure and organization for the sixty-six camp sites located in the state. There is also information on the camp numbering system, types of camps, the process of selecting and ranking enrollees and a description of the average camp buildings and arrangements. Five agencies operated camps in West Virginia. The United States Forest Service had twenty- two camps, the Division of Forestry, Conservation Commission had twenty-six, sixteen on private and ten on state lands, and the State Parks of the same agency had eight camps. The United States Soil Conservation Service operated eleven on private farm lands and the Army Corps of Engineers had one camp located at the Bluestone Reservoir. Mr. Harr provides a brief description of each camp within these classifications, giving its dates of operation, exact location, some of the personnel, and activities performed. At least five of the camps were integrated, one was for black youth only, and only two were for veterans of World War I. The designation system used alerts the reader to each of these, as well as the type of camp. The publication includes handy compilations of all the camps, their type and location. There are also a few photographs and an outline map for site reference.

Posted by kitchengeeking at 4:06 PM