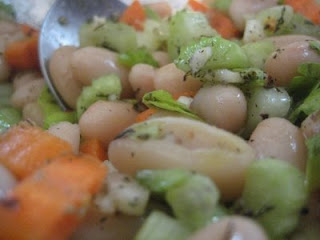 Another day working at home, another pantry lunch. Inspired in process by Michelle to be as cheap as possible in my between projects and paychecks days. Inspired in flavor by stuff I've done before. Inspired in practice by what I had in my kitchen.

Of course I wish I had been to lunch with Krista and Beth at the Sitar. Apparently, Krista went for my favorite baingan bartha and introduced Bethie to the joys of garlic naan.

I went closer to my (Western European mutt) roots and hit up the Tuscan-style when I saw I had a can of cannellini beans, some carrots, and some celery.

The recipe is quite simple.

Toss it all together in a bowl and let it sit for at least 10 minutes for the flavors to start to blend.

If I had been fortunate enough to have fresh sage in the pantry or on the window sill, I would have done that instead of the thyme and rosemary. But I didn't. So I didn't.

That was it. But I was more hungry than just the salad, had homemade bread left, and eggs in the fridge. 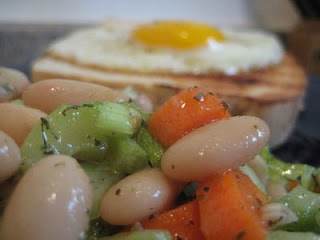 Y'all know me. There are a few things I just don't turn down.

Bacon is one. Fried eggs are another. Either with homemade bread turned into toast is a true masterpiece.

So I fried up the egg and put it on the toast. Both went down on the plate with the salad.

You can see those nice grill marks on the bread, right? My attempt at artsy photog-ing with the blurry background part that's just as much a part of the meal and the crispy-clear foreground, right?

The plate was of course from Fiestaware from the Homer Laughlin China Company.

And the cost estimate (adding in another slice of toast and another egg to make it a meal for two)?

That's only a quarter more than a PBR at non-happy hour prices at the pub. I mean, really, that's cheap.

Speaking of PBR, The Cheez is heading to the pub after work right now. And I'm going to join her.

Posted by kitchengeeking at 2:39 PM