More than a bowl of oatmeal. 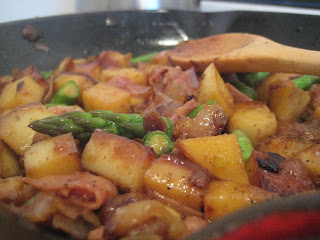 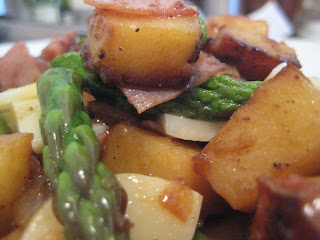 Oil heated, diced onions and taters in the pool with salt and pepper. Stir through quickly to coat. Leave it alone on med/med-high heat. I mean it. Leave it alone until the taters crisp up. Stir it up, splash of chicken stock, cover, let it go for 5-7. Stir in the ham and asparagus, one more small (2 tsp size) splash of stock, stir through, cover, and heat through. Put it on a plate, scatter the swiss throughout, take to the table, put a fork to it.
Posted by redneck muppet at 12:22 PM

Hooray! I've been waiting for you to go .com, hehe!

and here i am dot-comming it like a real geek!