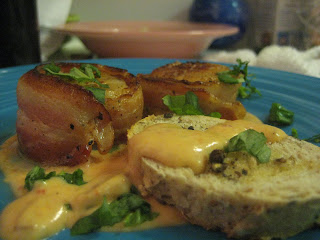 Sadly, intrepid geekers, you'll have to wait a while for the full dinner story. Not because I'm some sort of braised short rib tease...well, at least not in this instance. No, it's because I mostly cooked last night.

My camera was, as evidenced by the photo here, in attendance. But Jerry's was too, and he actually edits his video and makes little stories for the people.

But for today, you'll have to deal with the presentation photo and a few other words about the middle course from this guy. Which is really a lot, and really the substance of the night after the first course of port salou, mini-mozz, the most lemoy stilton ever, a leyden that was creamy and cumin-y and wonderful, prosciutto and mozz stuffed pepperoncinis, and a killer wet salami that screamed eat me with that bread. And after the final course was cooked and not eaten (sort of) because we were all so full.

I mean, I tasted the asparagus and baby portobello risotto as I went, and G and I both tore apart one of the Carmenere-braised short ribs to taste (since neither of us had ever cooked them). But in the end, we just had the app platter, some lobster bisque of a damn-tasty-coming-from-the-store variety, and the scallops course. 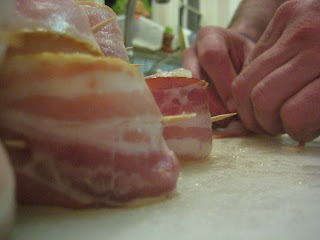 Oh, the scallops course. gorgeous orbs of mollusk-y goodness wrapped simply in applewood-smoked bacon; seared in a pan with drippings from said bacon and a pat (or two) of butter; then plated family-style with a passed bowl of red pepper-mushroom cream sauce and whole-grain baguette oven-toasted with olive oil, sea salt, and fat-cracked black pepper.

The bacon is one of two pounds I have left from last year's bacon of the month club. On the simple side as most of them were. This wasn't a club for weird; it was the club for bacon. Simple, porky, slightly smoked with fruit wood in some manner. Case in point, the Applewood-smoked bacon from Oscar's.

We had enough for the scallops, some crumbled back into the cream sauce, and five slices on which to munch. And you've heard me talk about it before, but there is NOTHING like the chewy, salty, wonderous texture and flavor of simple and well-made bacon. If you want to get some here's what you do. You drive to Sam's Uptown Cafe. You tell me you're there. We drive and get more.

One of the few times I was cameraman last night, tending the bacon as it rendered to start the cream sauce, I got to capture this beautiful sight. The G, wrapping the scallops in the bacon, finding out the bacon was from upstate New York.

No only is the man a master in the kitchen, he's homestate proud too. You have to respect that. Maybe next time he heads up to Utica he'll take a swing over to Oscar's.

Come to think of it, my gas tank is almost full.

And he'll be working at the bar tonight.

And we'd get there in time for High Tea with Bacon if we left when the bar closed.

And I just ran the directions to get there...
Posted by redneck muppet at 11:02 AM

Prosciutto and mozz stuffed pepperoncinis--- I want to eat these everyday until I die. They are awesome!