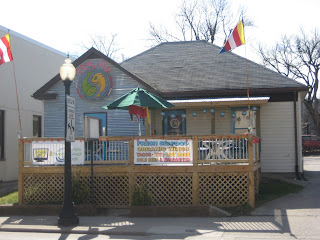 I'd only been to the Tricky Fish a couple times before this year, and it was admittedly "open and still growing." It's a work in progress. But it had been there growing long enough and I've been there enough times to tell you about it here.

As I've said before, I'm a slight homer here in that I know the owners pretty well, but I've also been honest with them about things I don't like over at the Bluegrass Kitchen. So if you'll bear that in mind, I'll get on with the food. Pictures from my most recent trip only.

There were two soup options today, a Tortilla Soup and a Red Chicken Chile. I went Tortilla. Then I went fried catfish tacos, two of 'em. Cause that's one of the fourteen gangs with which I roll.

Tricky Fish is an "order at the counter and go sit, we'll bring the food to you" kinda place. Small enough that the cashier can grab the orders and get them out to you without trouble finding you. I grabbed a seat at the back bar (six stools, a tv, and an NTN monitor). 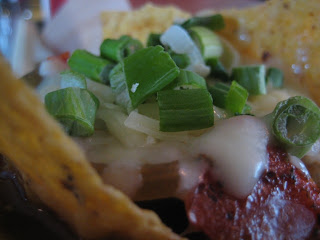 When the soup arrived the waitress apologized that the bowl was a bit stuffed. I was not going to send part of it back. And the cup was pretty stacked. You can see cheese, tortilla, and scallions there. Damn thing was packed full of big pepper chunks, some jalapeno, and black beans too. A nice low jalapeno heat permeated it.

Tortillas on the bottom were soggy-goodness after soaking up that much soup. Tortillas on top were crunchy and salty and cheese-y. Almost French onion soup style with the crouton and gruyere. A bowl of that would do you right on a cold day.

A bit of conversation with Jon about Twitter, Facebook, and MySpace filled the time until he was called away to fix a Bain Marie at Bluegrass and my tacos arrived. 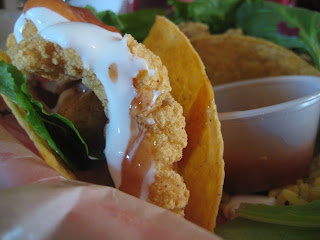 I've heard it said that folks have had bad experiences with portions here. Let me go two-cents. The tacos were cheese on the bottom to hold the catfish bites downs (that's smart). Catfish bites still tried to escape the shell.

You can see why...it's stuffed with catfish bites. I'd say there was 1 oz. of cheese and a strip of fresh salsa on the bottom; five or six 2-bite catfish nuggets; and a small smattering of fresh spring mix greens on top. Greens feel off a lot...no room for them to stay on.

The crunchy shell; the coating on the catfish and its flaked soft meat, cool temp/warm heat salsa. Yeah, I'm going to say that I'm a fan. I topped each with a drizzle of buttermilk creme fresh and the tangy (what appears to be) bbq sauce.

Last week I stopped in (working four blocks away is NICE) and had the crunchy chicken soft tacos. They were exactly what I just typed, with a nice pile of rice and beans to go with 'em and another big glass of sweet tea with which to wash it all down. I mighta' asked for a little bit of extra cheese on those, and will next time.

Heard someone today ask for cheese on their rice and beans. Develishly good idea.

I late-lunched it, so the place was full when I got there and still had a few other late-lunchers when I left.

$8 for the tacos (with rice and beans) and a buck-plus for a large cup of sweet tea wasn't killing me. And you get what you pay for. I could go get $8 worth of Wendy's and have a mountain of meat in front of me. But I wouldn't have any clue where the meat came from. Not slammin' on the Wendy's (you know me), just saying there's something to be said for folks who charge more because they're buying and preparing high-quality ingredients. Jon and Keeley do that, and the results have been pretty good.

In addition to the food, there's NTN Buzztime Trivia and the increasingly-meaningful-as-summer-approaches-deck. Margeritas and bottled beer now; taps to come (with rumors of Yuengling abounding all over Charleston).

Posted by redneck muppet at 2:38 PM

Edie and I lunched there on Friday while waiting to get the other kids from their early school dismissal. I realized how kid-friendly and kid inviting the place is. Edie loved the custom-painted walls (by Jamie Miller) the Jupiter Hamilton piece, the tall tables...all of it! And the ambiance lets a kid have regular kid volume, too.

Plus, the $3.95 hot dog Edie had would definitely be enough to feed two kids, especially if you sprang for a second bag of chips. And...Mahi Mahi soft tacos? I LOVE THEM! I want one right now!!

So I wondering how these tacos compared to the tacos you had in DC and the ones you made yourself.

I hope you don't tell me it's apples and oranges.

Of course it's apples and oranges. These are American adaptations of tacos. They're not Mexican food. There's no carne adovado on the menu here.

They were really good. The sauces were hot and cool, the textures were crunchy and smooth. It was a great taco.

But I'd never call it a Mexican taco.

Ony been here once, but really enjoyed the experience. After reading this review, I think it might just be lunch at the Tricky Fish today for me!