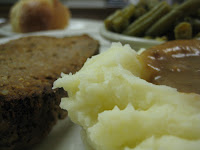 Take a ride out Washington Street sometime. Don't head up to Edgewood. Don't stop, in fact, until you get to the corner of West Washington and Florida. Make the left onto Florida and then turn immediately into the parking lot for the Smoke House.

That's the back door, past the pool table and through the dining room to the left. Grab a stool at the bar. Get ready to be met with a smile and a "Do you need a menu?"

They'll ask with a smile because they're all just really nice people working at the Smoke House. They'll ask if you want a menu because they won't recognize 'you,' unlike the rest of the customers who could possibly have been coming to eat there since before the end of World War II.

The owner's father and uncle bought the place from it's original owner when they got out of the service. It was across the street in what is now the parking lot of the Family Dollar. They moved it across the street to it's current location when the A&P grocery left in 1949. Rented until 1977 when the building owner's will gave them first option to buy it. The dining room was expanded into the adjacent building in 1988.

(That was 5 minutes of very pleasant conversation with the current owner after we chowed. I asked 'How long have you all been here.' He supplied the rest.)

The owner was behind the counter today. Like he is everyday. Most employees work 6 days a week. They're closed on Sundays since football season ended, and he may keep it that way. Said he'd make up his mind on that in August.

G brought me here the first time. Brown beans and Cornbread. Baked Steak with Mashed Potatoes and Gravy, Green Beans, and a homemade roll. G went for beans and cornbread and a bacon double cheeseburger. We left mere scraps on our plates. Though I will admit to not finishing the brown beans. 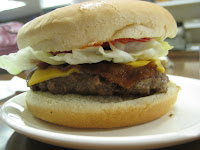 I have wanted to go back ever since. Badly.

K went $2.50 broccoli/cheese soup and $4.25 bacon cheeseburger. I went $7 meatloaf dinner with mashed potatoes and green beans (I could have gone peas, cole slaw, or macaroni salad) and a homemade roll (the cloverleaf kind grandma used to make). Also grabbed an order of $2 cheese fries so there would be more food to contemplate.

The food is scratch made, evidenced by a broccoli cheese soup that was heavy on real pieces of broccoli and the creamy texture. And the lack of a nuclear orange color. She was downing it pretty fast, so I expertly (bluntly and loudly as soon as she looked up between bites and said it was good) asked for her spoon. It was the real deal.

I later noticed regulars coming in and looking slightly unhappy when they heard the soup of the day. Leads me to believe there are even better soups to be had, and guarantees another visit soon.

The nuclear orange color showed up on my cheese fries. And it was what I expected and wanted. Nacho cheese over crispy fries instead of chips. Two dollars out of your wallet.

Then my $7 meatloaf dinner rolled out of the kitchen. A thick slab of all-beef meatloaf with onion and celery in plain site and a classic ketchup glaze. It was fresh and not dry. They serve it as a sandwich as well, and I would tear it apart if I ever got a hold of one. Real whipped with love mashed potatoes with a deep beef-based gravy. And a real homemade roll that was still warm.

K and I were an hour total with drive time, and we lingered, and we chatted with the owner. So you can take the drive from downtown and get back in time. You can do it. And I imagine Ms. K will comment relatively soon after I post this that your should do it.

Posted by redneck muppet at 1:36 PM

It isn't at Florida and Washington... It's Stockton and Washington, several blocks away from Florida St. And the food isn't all that great.