Cilantro's - The Cure for the Common Burrito 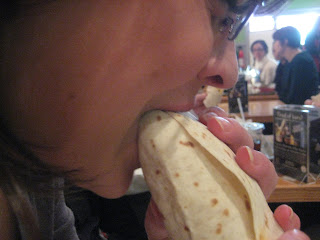 We do things real big here at the house of geek. We roll with 14 gangs of foodies in a town with only 13 gangs of restaurants. Thankfully, we also roll with Cilantro's. Located in the spot Delish reigned for years (I STILL want my satay and udon back!), Cilantro's is the fresh and local answer to chains like Chipotle and Qdoba.

Ms. K and the Always in Her Element Ms. Bethie rolled in last week.

Go make your own burrito. Or three hard-shell tacos. Or "shirtless" with no starchy outer layer to your goodness. 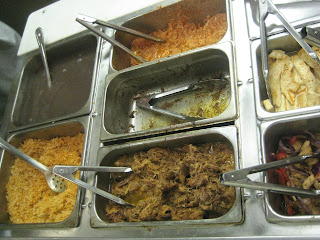 Start here. Go for beef (they were out), chicken, fish, pork, tofu, or roast veg. Add rice and/or beans.

Move on over to veg. I go everything but olives (still can't feel 'em). So lettuce, cheese, jalapenos, cilantro, tomatoes, and onion.

Then on to guac, sour cream, sauces, etc. Always with the guac in my world. Choose your sauce, I go chipotle cream. There's a bourbon sauce and three or four others which escape me at the moment. They're meant to match with particular proteins in some cases. Staff's grand at making pairing suggestions. 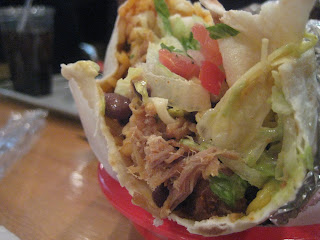 Burrito guts here show you the mix. It is NOT a burrito for the faint of heart or small of stomach. But it can be the burrito for the skinny of wallet. Burrito and fountain soda for less than $8. 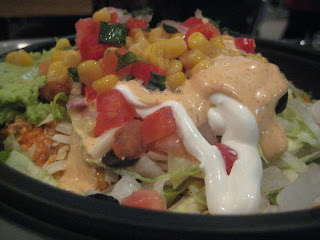 Here's the stripper version. Shirtless. Our own Bethie went there. And she rocked it right. In deference to her 'ewwww, that looks gross' I will refrain from the mixed together shot of all that shirtless goodness.

I'll tell you that I have a Fork You moment when I realized I wasn't going to be able to get tacos to compare with K's burrito and Bethie's shirtless. Out of taco shells. Noon. Wednesday. Problem. I don't suggest the 'go get some from Kroger philosophy.' But I do think pantry planning shouldn't have you out before a day's rush. You can see at 3 or so the day before and usually (really, usually, not always) get some delivered before the next day's rush. I'll also tell you it's the first time (of many visits) that I've run into this problem. So we coulda just hit the weird. Not a crisis. Kinda makes me want to go back so I can get the tacos next time.

I've tried the beef, pork, and chicken in burritos, and the fish in tacos. Some burritos I go rice and beans, some just rice. Sometimes I'll go WILD and grab some roast veg in with my protein. That makes for and uber-stuffed as the folks at Cilantro's just don't know how to skimp.

Walking distance from so many downtown places. They do some evening specials too, but I haven't made those yet. Mebbe sometime this spring I'll walk down.

In the meantime, hit this slightly off the main drag still in plain site lunchery for a cheap-as-it-gets gut stuffer.

Posted by redneck muppet at 9:13 PM

I really like Cilantro's - I go for fish with every veg (except olives) and the mango salsa. I have not run into a supply problem there, but have heard other folks, besides Dan, got the bad news that they were out of something.

I'm also in agreement that we need the satay and noodle dishes back, Virgil!

Qdoba shouldn't even be mentioned in the same sentence as Chipotle - which is of course, itself, not exactly a highlight. But Qdoba is the kind of east coast/tex mex abomination that makes me know, in my heart, that I could never be permanently separated from Cali. Seriously, that place is horid. Awful. Ick ick. I still want my $6 and 30 mintues of life back I spent eating something from there.

I really love Cilantro's, but the staff there leave something to be desired in my opinion. I just wish I could depend on them to be open during the hours they post on thier door. Many times they have closed early due to it being a "slow day," but this often happens long before the dinner rush would start. I think I'll stick with Virgil's other options like Vandalia Grille. Yum! Vandalia's lettuce wraps are awesome!