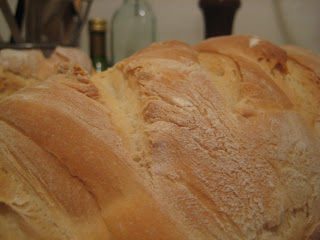 I heard the hollow sound. The sound they told me to listen for when tapping the bread in the oven.

That there was bread in the oven was a miracle in and of itself.

But I HEARD the deep hollow wrap-wrap-tapping back at me after about 50 minutes in the oven.

Pulled out the loaves and just stared at them.

There wasn't anything else for me to do.

My first yeast breads ever had just arrived.

And I had no idea what to do next.

The recipe stopped after "Remove bread from pans immediately; cool on wire racks."

But could I slice into it right then?

Is there some baking equivalent of letting a roast rest to redistribute the juices so you don't have all the flavor sloshing around on the cutting board?

No, no. I've heard of people slicing into fresh baked loaves of bread. They usually are remembering a farm house kitchen, or recounting a tale of a mid-20th century grandmother. 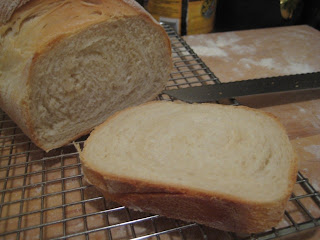 So I knew I could do it. And I was literally bouncing around in the kitchen with a goofy grin on my face. Like the one on my face in the picture of me circa 1981 when I'm climbing over the fence at the farm. Or the goofy grin when I got Bec in trouble at age 9. Or November 4, 2008 when I realized that in 77 days they really were going to have to call him "Mr. President."

Proud and not caring if anyone else ever realized how proud I was.

And then the knife sliced through the crust and the soft interior. The steam rose from the first slice. The intensity of the yeasty aroma burst out at me.

It was unbelievable. And it damn well may have been transformative.

I just opened up a fairly large door of things to do in the kitchen that I had mentally blocked off.

Posted by redneck muppet at 7:27 PM

Email ThisBlogThis!Share to TwitterShare to FacebookShare to Pinterest
Labels: baking

Was that one of the no-knead breads? Or did you do it the more traditional way? I love making my own bread. Nothing like it! I'm drooling looking at your photos.

Oh congratulations!! I'm so scared of bread, but I know I'm just making excuses. I've made a couple yeast breads, but one was naan, which is flat, and the other were steamed buns. Both were successes. Here I come bread!

@Amy nope. It was the plain white bread recipe from the Southern Living cookbook. I'm reading the America's Test Kitchen Best Recipe chapter on breads now to get a bit brainy about it. And I've read the Bittman piece in the NY Times on no-kneads and have them in my sights too.

@stef if my fear of measuring and terror at the thought of yeast having to grow (and my being responsible for the growth of another being) you should open a bakery next week!

Dan, you should ask for a bread machine for your birthday. You can get really creative and crazy with the cheese whiz with the machines. Feel free to come and check mine out.

Damn DT! That looks yummy! I got two new mags this month, Mother Earth News and Grit. Mother Earth has some different bread recipes and the Grit has a plan for an outdoor clay bread oven. I will build the oven this spring, as for the bread I will try and let you know.

I was amazed recently that I could successfully bake bread, haha. I used variations on this recipe (simple and has good pics).

As for when to slice it -- it all depends on how long you want the bread to last. Slicing immediately releases a lot of steam, so the bread will go stale faster. (Not an issue if it's all being eaten immediately.)

And your bread looks delicious.

yeah, here's guessing you know those loaves lasted about 9.4 seconds!

You should try Alton Brown's recipe for Soft Pretzels. It got me hooked on baking with yeast and they're so fun to make.