It had been 44 long years since a holiday dinner was served at the first house on the left up Douthat's Creek Road outside of Minnehaha Springs in Pocahontas County. 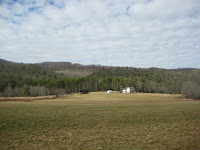 Nestled against the Monongahela National Forest and a few short miles of WV Route 39 from the Virginia Border and Bath County, the family farm house was built in the winter of 1884-1885. 44 years ago, after retiring from the ministry, my Grandfather and Grandmother were back at the farm house built by Ella and Preston Rexrode (my Grandmother's parents).

Mom came home from college for Thanksgiving that year.

After that, Grandma and Grandpa moved to Ravenswood in Jackson County on the Ohio River to live near my Aunt and Uncle.

Since there was no insulation, no HVAC system, and little else in the way of modern convenience; the farm house stood vacant from October to late-March every year since. The water shut off to keep the pipes from freezing in the winter. 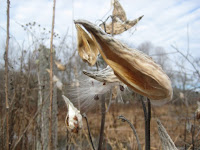 I spent summers there, sometimes two-week vacations, sometimes for seven weeks at the camp in town with the occasional night at the farm when the family was visiting.

We'd walk the road down to Max and Rene's on Saturday's to watch cartoons, passing the milkweed pods along the way.

Now I was back in late November, with the milkweed along the creek giving up it's wispy seeds to the wind.

Cold air and a little snow higher up the hillsides on the drive in to the house.

There were Winterberries at the edge of the high field by the barn and down from the old orchards.

Brilliant red against the muted greens and yellows of the winter hay field. A bed and breakfast for the deer, providing shelter from the wind and a ready meal in the mornings and evenings. 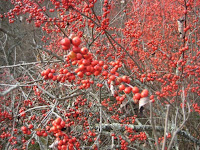 We cooked our meal on Friday this year, a slight twist to the traditional day so that Bec and John could spend Thursday with John's family in Morgantown.

John had finished building their new house a few short months ago. The radiant-floor heating and concrete kitchen counters. The back deck and the little-brother suite.

It's nice, I'll blog food from there soon.

As we waited for them to arrive, Mom sauted a bit of Buffalo sausage from the Dupont Circle farmer's market in DC. 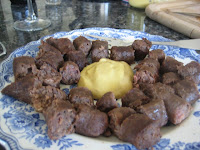 There will probably be more local food as the years go by. There's a crew of young people who have come back to Pocahontas County after years abroad in our land for school and work, to build families, and to do what young West Virginians are supposed to do, go somewhere else to live.

But that's changing. Sarah and Joe Riley are raising beef, lamb, and pork at Stamping Creek Farms. Mom picked up a sampler box after I left. I'll be driving over to get a box of swine sometime soon. Greco will like it...

In addition to the sausage, we had a gorgeous salad, and some friggin' incredible sharp cheddar on wafer crackers with a small dollop of cranberry chutney. 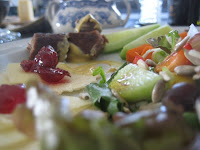 And after that, we started putting together the real meal. I made a cornbread that morning for Mom to use in the cornbread, sausage, apple stuffing. Used a much coarser grain corn meal this time.

The bread had real 'teeth' to it. A much stronger corn flavor, and it held up very well in the stuffing.

Yes, stuffing. We put it in the bird. Like people have been doing for YEARS. No one's dead, and the thing was delicious. 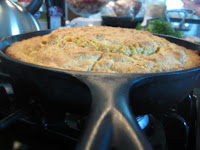 Mom had S buy the turkey and asked her to get one somewhere between 12 and 18 pounds.

Bear in mind there were five of us for dinner.

So the 16 pound monster, while technically in the range, was definitely a conversation piece as well as a source of protein. And it was stunning.

There's video of the carving at my YouTube. There's also video of cows, travels up the road, hurling rocks off cliffs to the ice on the creek below. A few more photos at Flickr.

There were mashed potatoes, the last fresh green beans of the year cooked with bacon, our family's cranberry sauce heavy with orange zest, and rolls with which to butter and sop gravy. Or you could go the raspberry preserve route. Or both. 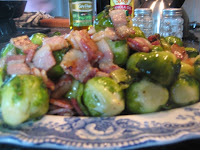 And there were the yummy little cabbages!

Yes, dear reader, four of the five diners here were lovers of the Brussel's sprout.

When you cook them right (and yes, I cook them right), they are not stinky cabbage. They are crisp, bright cabbage with a chew. More than a hint of bacon flavor. And a GREAT way to prove your foodie superiority! (Smile, that was sarcasm...sort of...) 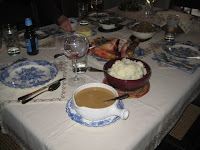 I got lazy with the camera at this point.

One quick shot of the spread at a bad angle.

But you can see the gallon of gravy, the taters, the turkey, and the gorgeous china.

It was a classic family meal with smiles and toasts and remembrances of past meals, and missing members of the family.

I think it was especially joyful for Mom to be able to look around that table and see family in that room again. A rebirth of a meal held for decades without pretense.

The remains of the turkey already bubbling away on the stovetop in the kitchen while we ate. 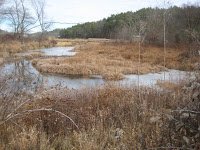 A walk the next afternoon along the entire property line in the fields.

Down to the bend in the creek that wasn't there when we were kids, the flooding that sometimes ravages the area creating a new view in a familiar place.

It was a warm day on Saturday, and we were taking off layers as we walked.

Along the eroding creek bed to the old swimming hole. The clay bank we used as a slide long gone. The visions of Willow trees along the bank to hold back the erosion well-formed in the minds of Mom and S. 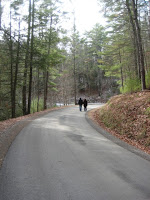 We finished the walk and headed back to the house for a bowl of soup before Bec and John headed back to town. They knew where the white pines were growing so they could take a few in the spring for their new house.

Mom had located some ground pine for the Christmas decorations.

I had fixed the wireless at the house so we could all sit by the fire in the living room and connect with the rest of the world when the mood struck us.

It was everything I possibly hoped the holiday could be.

Herb took one look at me when I got back and declared I hadn't looked as relaxed and happy in months.

He's right. In part because of the four days I spent there.

In part because I am keenly aware that it won't be the last holiday at the Rexrode Farm.

We'll have more turkeys, more fires at night, and more walks up the road.

thanks lady! it was a great weekend. hope yours was tasty and relaxing too.

I love Brussel's sprouts! Pulling them apart, dipping them in butter, leaf-by-leaf . . .

I guess what I really love is butter.

Wow, the photos on this are incredible. Best food pictures I've ever seen. But the post was wonderful too. I live in Rockingham County, Virginia.

Absolutely beautiful entry, words and pictures. :) I love when the holidays bring out feelings of such happy family comfort. And I love the work that's been done on the farm as well, looks lovely!

J - Ditto on the love of butter.

farmer - Harrisonburg is one of my favorite small towns in America. has been for years. tell me where to go for local food and good gravy there.

Erin - thank you. momkins had so much fun. it was great to see her smile.

I enjoyed the Thanksgiving post. We must have just missed each other. I was in Pocahontas County Monday- Wednesday. With all the economic crises, it's good to know you have a little bit of rural WV you could move to and farm...

You're good with the words. You should do something in communications. ha! No? ;)

Come to cali, dang it.