Spaghetti Squash with Veg and Feta

I was stuck. Completely frozen by recipe overload.

I was staring at a half dozen cookbooks trying to figure out what to make tonight.

Then, the internet happened. 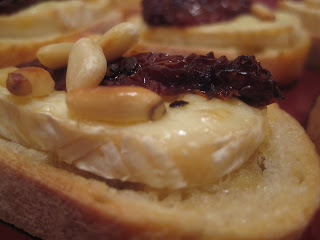 I told Chez I was cooking (she was excited...cause really, it meant grub for her!) and that I couldn't figure out what to make.

We chatted over stir fries and making sure I ate vegetables today.

Then she got crafty with the Google and came across this.

And because I had company (haw!) I needed an appetizer too.

Slice baguette, add a wedge of brie and a sliver of sun dried tomato on top. Bake at 375 for 12 minutes. Sprinkle three or four toasted pine nuts on top.

I was missing something here. I mean, the sweet sun dried tomato and the gooey brie was delicious with the crusty baked bread underneath.

Maybe some marmalade or honey?

Chez is probably right, I was just trying to recreate my baked brie with fruit preserves in bruschetta format. 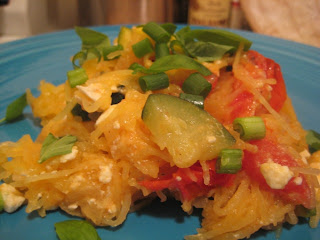 I ad-libbed a bit from the recipe online to get more veg into my body and included some diced yellow squash and zucchini.

Since I'm usually anti-olive, I nixed those from the recipe. I also probably cooked the tomato more than the recipe folks had in mind.

Fah on them I say.

The feta really creamed out the dish into a velvetty texture. The squash had just a hint of chew left to it, and the basil and cooked tomatoes offered a familiar sweetness that was perfect with the salty brine flavor the feta gave.

Posted by redneck muppet at 7:09 PM

I must say it was delicious! We also determined, because at least I am a hog head, that this dish is wonderful as a cold dish too. It's a keeper.

So, I experimented with a spaghetti squash and toasted walnut recipe a few weeks ago. It was my first such squash experience. I thought it was kinda mushy. Should the squash be mushy, or more seriously spaghetti like in consistency?

more spaghetti like in texture. it mushes out a bit when it gets overcooked. can happen pretty quickly. you can pull it before it's completely done and leave it cut side down and it'll steam finish for several minutes.