The Mountains Were Painted in Rust

Driving up to Canaan on Friday for the post-election crash at the boss's place I was sad at first that we'd missed the peak foliage. We'd missed the last of the brilliant green clashing with the first maple to explode Christmas red. There weren't any yellows and oranges left that hadn't faded and muted.

But after the weekend, on my drive back, I realized that wasn't a problem. I was driving on top of the ridge line between South Weston and Burnsville and realized I saw the top of the world and it was painted in rust. Even through the slate grey November sky spitting a drop and a flurry here or there.

So those were the first and last thoughts about the trip I took to relax and reconnect. Last time I spent much time up there I ended up with a double-spiral fracture. Better results this time. Calmer results. Results not requiring my mother to stop at the hospital ER in Oakland, MD after a McDonald's drive thru because I was not having anymore of this leg in ice on the way back home.

Sorry, stream of consciousness is entirely possible since my writing has been so infrequent.

Here's the view from the deck at Dirt's place. Straight down the open gulley to the east ridge of the Valley. Back over to your right would be Timberline. You can see it from the resort's lodge. 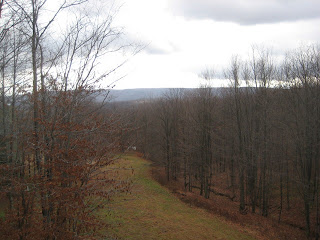 So I poured generous glasses of Woodford Reserve and we watched our boss give his first press conference as President-Elect. Around two hours after that, we were officially off payroll and unemployed, but still...

I forgot to take pictures of Friday's dinner because I'm so out of practice at all this. I didn't even have my camera until I picked Dirt up at his house. Clint had taken both my cameras to use for the campaign. And he did good work with them.

Dirt cooked Friday. He made some damn tasty filets on the grill with nothing but seasoned salt. I'm usually a 'more fat is more flavor' cut of meat guy. You know this. But a perfectly cooked choice filet is never something I'll walk away from. The man steamed some asparagus and baked sweet potatoes to go along with it all. Did I mention the steaks were grilled perfectly?

Yeah, I could taste smoke, fire, and beef. That was it. Delicious.

We had a couple of Dirt's friends over for dinner on Friday. Picked apart the Presidential race, some statewide races, and the general sense of the world we all had. Red wine made for smooth conversation.

Even better was waking up Saturday morning. When, I awoke to a fresh pot of coffee...and this... 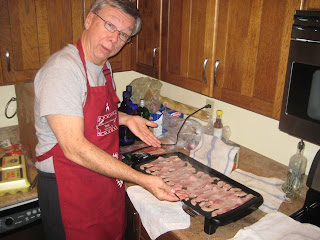 Handsome man isn't he? You can see why Michelle has stuck with him for all their years.

Little ditty from the weekend as Tom's cooking bacon and making eggs to order. Breezy, Clint and I asked when Michelle was cooking breakfast. She said the first weekend they were married Dirt asked what was for breakfast. Michelle replied "My Dad always cooked weekend breakfast. So it's whatever you cook when you get into the kitchen. What are we having?"

Dirt's been cooking weekend breakfasts ever since.

Michelle also tells a wonderful story of her father, her husband, and her son in the kitchen together making pies. Apparently, there just were not gender stereotypes getting in the way of this family at all.

Still haven't had a pie, but I have Dirt's cell phone and directions to the cabin at Canaan. I'll report back soon.

Posted by redneck muppet at 9:11 AM

Email ThisBlogThis!Share to TwitterShare to FacebookShare to Pinterest
Labels: about me, bacon, travel