So Wendy and I threw a dinner party. Started simply enough. We were out at happy hour talking about the nothing I was doing with my life and how much I enjoyed it.

We decided it was high time we reprised the Easter Supper feast from the spring and invite all sorts of buddies over for an informal night of wine, Red Stripe, and food. 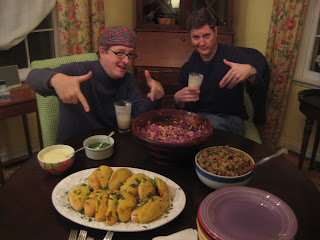 It turned into a spread of:

Wendy popped the swine into the crock pot with some Jamaican Curry rub, broth, and quartered onions for the day.

Then she made the curry paste with some prepared curry powder, fresh ginger and garlic, and other bits she'll have to tell you about. It was HEAVEN.

I showed up about 3:30 to start making the sauce, slaw, and rice.

Really, you could also pour it into a glass and call it a smoothie. Damn tasty stuff.

About this time I decided it was time to the Jamaican Hand Grenade of a Red Stripe. Friggin' tasty beer. Do what Dave Thomas taught me one day and throw a lemon wedge in there. Better than lime in a Corona.

Then shred the cabbage, dice the pineapple, chop some red onion, dice a Granny Smith apple, shred a few carrots, and rough chop cilantro and mint. Dressing was buttermilk, mayo, orange juice, lime juice, lime zest, and salt. Dress it about 45 minutes before dinner to get the juices flowing and soften the cabbage just a bit. The citrus keeps the apple from discoloring, so you're safe there. Fantastic crunch and sweetness. 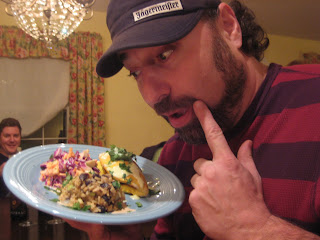 Greco was there. You're not surprised.

You're also not surprised that I have video of karaoke happening. What will shock you is that I don't intend on posting it.

About 35 minutes out I started the dirty rice. Dice a Spanish White Onion, saute it in some oil and add some prepared sofrito, add in the rice and stir through to develop a bit o' starch. Add in the veggie broth and the ham, bring it to a boil, reduce to a simmer, cover and walk away.

When it's all done, remove the ham, dice it, and throw it back in. Add in the black beans with a bit of their liquid, and stir through a bunch of chopped scallions. 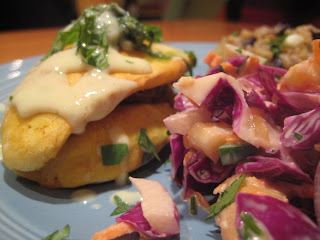 Plating was aided by some chopped flat leaf parsley.

Wendy made the dough. It was simple and delicious. And we didn't pay attention to sealing the meat pies.

So we had meaty dough clams. A dollop of prepared cilantro chutney and a spoonful or two of mango yogurt suace on top.

A spoonful of dirty rice, a pile of slaw, and a fork complete the plate.

Dessert was originally going to be lime sorbet on coconut tarlets with raspberry puree. The sorbet didn't set, so we improvised and put Greco in charge. Triple layer glassed with lime sorbet on the bottom, raspberry puree in the middle, and a splash of chilled Grey Goose floating on top. Really flippin' delicious.

And the coconut was chopped up and treated like bar peanuts instead. Sweet, chewy goodness. I think Ed and I polished most of it off.

You really SHOULD post the Rock Star video! It was awesome!!!

which one? hardy and jer or jer and wendy?

The one of Jerry and Wendy might be a bit much right now.

www.youtube.com/watch?v=7KSBFfqcRQY <----why grown men should limit their wine intake.