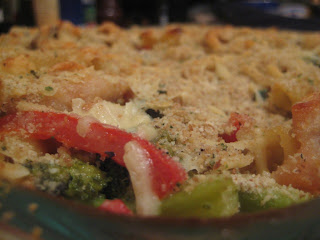 Take this tasty little Epicurious recipe from 1995. Read several of the comments and recognize that the addition of garlic when sauteing the veg and mushrooms of the cremini flavor were roundly accepted as required 'fixes,' invite over several friends, and make sure there's wine.

This was a fantastic little ditty for me to use as the first meal cooked in the kitchen post-election. There were chopping steps, stirring steps, multiple pots but not all on the burner at the same time, cheese, baking, and creamy goodness.

It even forced me to do a hasty little bit of cleaning so I could entertain Chez, Jer, and Ms. Krista. 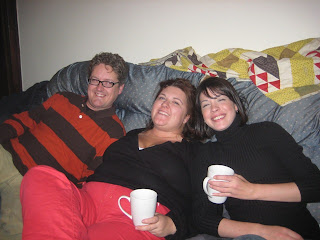 They all seemed to enjoy themselves.

Had to do wine in coffee mugs since I think all my wine glasses are still tied up in UGK storage.

Funny, it still tasted pretty good to all of us.

I was hoping the pasta would be a warm dish for a cooling autumn night. The cream sauce was light enough that it was more a remembrance of summer than anything else. Still damn tasty.

Chez, Krista, and I all agreed that the chicken was tasty, but this was a dish you could remove the meat from.

If I do this again, I'll keep the cremini's chopped and also add some 'meatier' chunks of portabellos to the mix. 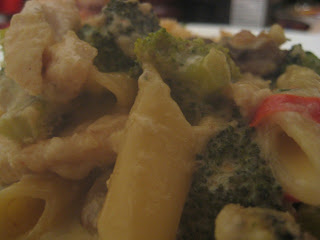 A bit more of an earthy undertone would really be a nice addition.

And of course, I went heavier on the cheese and cream for more sauce. The breadcrumbs on top were a nice crunchy edition as well.

Because they were on top, I lowered the oven temp and baked it for about 20 minutes instead of the 3 minutes under the broiler in the recipe. Worked pretty well.