Getting Back to Cooking 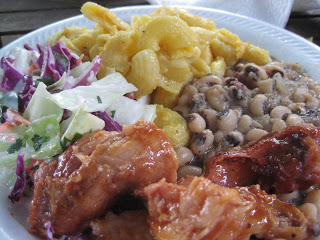 Getting back to cooking. I'm still not cooking in my new apartment, but will be soon. The stove's hooked up, the renovation is mostly done, and the fridge should be delivered soon.

Until then, I have Sunday Funday, Mark and PG's compound, a smoker, and Mark's kitchen.

Greco takes care of the swine. Julie was on potato salad, Alex on her curried couscous salad, and Ryan on round one of mac n' cheese. 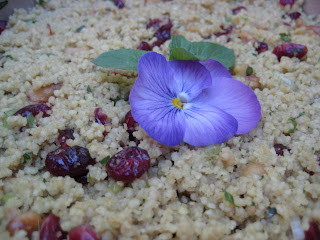 I got my kitchen geek on with black-eyed peas, collard greens, bacon cheddar jalapeno cornbread, jalapeno cilantro slaw with buttermilk lime dressing, and two trays of mac and cheese.

I NEEDED to cook that much. Both for me and my soul and for the 30 or so people who showed up through the day.

So many plate combinations, so many tasty bits of pork. Greco had two crock pots full of shredded shoulder and hind-quarter goodness. And ribs on the grill. 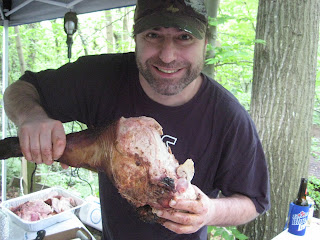 He also had the legs, whole, put aside for later in his life (ummm, like today).

When I drove up the street at 2pm, I could literally smell the swine from hundreds of feet away, the bridge at the bottom of the hill is where I first noticed the porky-goodness.

People, I have developed pork-dar! I am the swine-y superhero we all knew was out there somewhere. 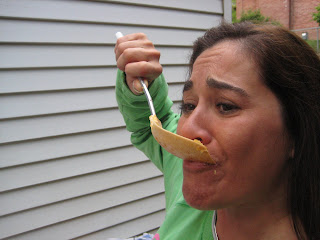 And my long layoff aparently has not resulted in cooking rust.

Ryan made the first batch of mac n' cheese, so I was just going to not make any, since we had so many other sides.

That was a poor decision, as it led to hungry pork-eaters looking at their watches asking when the damn mac n' cheese was going to be ready. Pearl demonstrates the popularity here, polishing off the last spoon-bites from my first batch.

I told Pearl I'd make her famous on YouTube, so here goes.

Beware readers, if you think someone is taking your picture today, that most of those cameras have a video function too.

Also beware this video is not PG. It's not awful, unless you hate see-food, but work-related volume control is advised.

Yes, I did go back in to the kitchen and make another batch of mac n' cheese. It was good too.

It's high time Pearl became famous on teh intarwebz

wow.
i mean really.
do you have no decency?

that meal is insane!!!

i need to go figure out a way to get mac and cheese with pork tonight...

But, wait. Where's the recipe for Bacon Cheddar Jalapeno Cornbread?

Both of these recipes sound incredibly delicious and are making this 6 month preggers girl very hungry at 3:56 on a work day. I am printing both and forcing Evan to cook them for me.