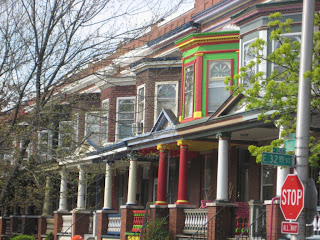 The 32nd Street Market in Waverly knows what's what. In an open space among the row houses, every Saturday, rain or shine, they have the market. It's an L-shaped affair with most of the prepared foods on the short stick of the L and the produce, creameries, and butchers on the long stick.

Steph and I parked about a block away and she grabbed her canvas bag while I man-pursed up.

Sun shining, cool breeze. Real spring was around. Not straight from snow to scorch like last year. 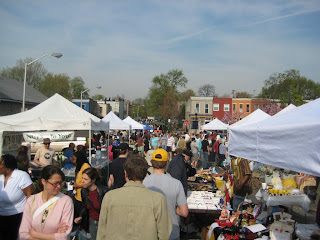 We got to the market about 9am, which is obscenely early on most days, and tragically so on weekends. It's true, though, that Steph and I had talked about the decreasing frequency of 3am in our lives, and the zen-like calm we have attained about that loss of mad-unrequited-stupidyouth.

So anyway, it was 9am, and the market was...crowded. There are still people to talk to and walk among if you sleep before 3am and wake before the crack of noon. Nice people. With strollers and mohawks (my favorite combo), satchels of veg, and steaming cups of Zeke's Coffee in their hands or the stroller cup holders. 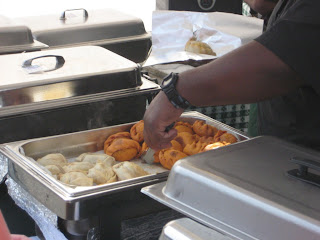 The first thing we did was walk straight down the prepared side to the far end, and the Curry Shack, where I found love in chafing dishes.

Steph stops by hear every week and picks up several little morsels of meat-pie love. The West Indian Patty is always on the menu. And really, it should be.

Neither of us got any of their bowls of steaming yummy, but Steph got her 4 of each of two kinds of pie to have through the week, and I picked up an Indian Curry and a Turkish Beef pie. I was not disappointed.

I knew it was going to be a good first breakfast because of three things. 1) my belly needed food. 2) there was a line of smiling anticipation in front of the shack. 3) my nose was working overtime to grab every little scent pushed out from under that tent by the April breeze. 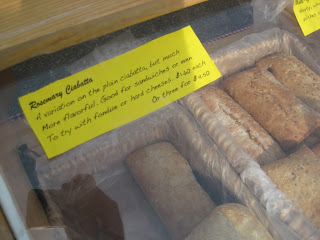 Steph kept asking why I hadn't put my tinfoil package of curry goodness in the man purse. Every time the reply was, "Because I want to eat them NOW."

Sadly for my belly, but not really tragically, it took about 30 minutes to meander through the market for Steph's shopping. And really, I was just tagging along. When I did get to much into them, I was soooooo happy. More on that later.

Because for the time being, I was following along through the crowd to several stops at some of the best little booths I've seen at a farmers' market. 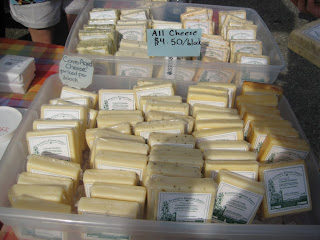 Worked out well for me, really. I ended up with two rosemary focacia and a sun dried tomato ciabatta loaves for dinner at Dad's that night.

Small loaves, soft and chewy goodness, with fresh rosemary aroma. It wasn't quite 'still warm,' more a function of getting to the market at 9 instead of 7. But it was delicious with some of the Serrano ham i picked up at The Wine Source later in the day.

After bread it was on to cheese.Those tasty looking goodies were at the joint where Steph shelled out a few bucks for some quality looking cubed lamb. 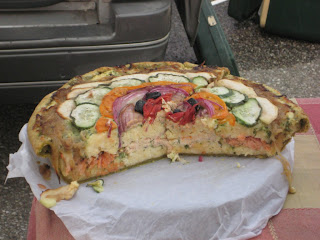 Then to one of the more unique little stalls you'll see. Neopol. Smoked. Everything smoked. Like this massive smoked-salmon pie. Steph was bummed they were out of the smoked chicken salad. I found out why later when we hit the Belvedere Market. The smoked placed has a permanent store there. And I was giddy enough to lick the little plastic spoon of smoked chicken salad I had there.

There's a brief review of Neopol here from City Paper. 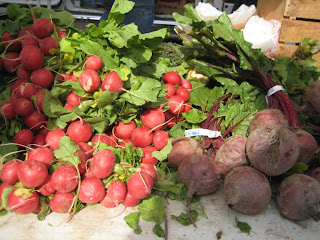 And even though it was early in the season, before the market restriction about locality comes into play (first of May I think), there was great produce. You can clearly see that here. I was a bit jealous. Mounds of cilantro, heaps of radishes, piles of kale and early, smallish collards.

I convinced Steph to buy some kale and we chatted about the joyful braising of tough greens for a few minutes as we headed back down the aisle. 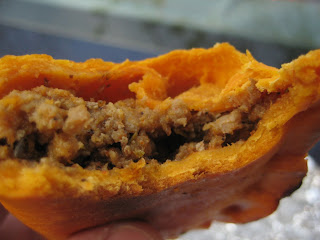 And then we arrived back at the car, where I proceeded to furiously unwrap the curried goodness and ear off the back of the car. I have multiple pictures of the pies in the foil, the foil unwrapped, the pies nestled together, each pie pre-bite, and each pie post-bite. Trust me, it was worth the pictures.

Julie, if you're out there, go here if you haven't already.

I do get the impression that there are markets like this all over Bal'mer since it's a real neighborhood town. This one's definitely a keeper for me though.

Posted by redneck muppet at 1:14 PM

why am i not surprised that my snark and photography outweigh my cooking in your rankings? i really do need to cook you a meal sometime lady.

Yes you do, sir!!! And sooner rather than later. Looking at all of your photos and descriptions of your cooking just twist the knife in my tummy a little every time :)