First, sorry for the delay. Working from 8am to 10pm pretty much every day the past couple weeks.

After starting my Anaheim weekend off with a goat burrito on Friday, I was ready for more. And lucky for you, there WAS more.

Jailhouse J suggested I try Rubio's for a fish taco. She said she'd had them and they were good. She was right.

They're a chain, but a clean, pleasant, tasty chain.

Since I was full of goat burrito still, I just got one. But a treat.

Crispy fried fish fillet-lets with fresh lettuce, cucumber/onion, and a creamy sauce. I added a squeeze of lime (which were at the salsa bar for the taking) and set to work. 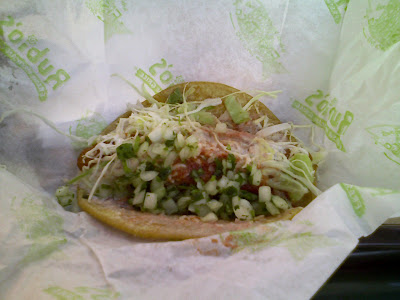 I'll have to try more, because they were tasty little morsels.

But they weren't the highlight.

That was driving around Saturday night when we just decided to drive around until we found a place to eat.

Boy did we ever!

Folks were getting hungry, and mutiny in the rental car was a distinct possibility. We saw the Pollo Loco and I said, "Let's take a right here and find the next place on this block to grub up." 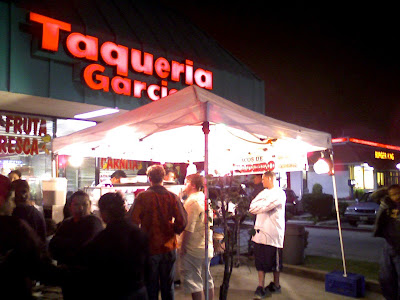 A tent set up in front of the Taqueria Garcia. Regular menu inside, two folding tables, a cash register, and lots o' meat under the tent outside. 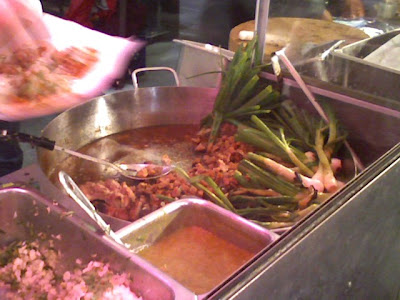 We had to ask what the cabeza and al pastor were. Clearly, we 'weren't from around those parts.' Everyone at the joint was smiling and enjoying a Friday night out at the local. A gentleman leaning against a pickup answered us and let us know what the deal was. Beef head and spit roast shredded pork. Done and done.

I convinced Chris he needed to try something new, and he went for chorizo with his asada. Good call. 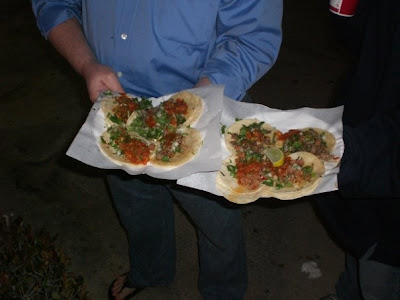 I went for one of each. With everything.

Thanks mr. bitter, you are now my official foodie-traveler man-crush. Deal with it.

Trust me, local food, freshly produced by people who have been doing so for hundreds of years, is the best crack on the planet.

The cabeza was a fatty pot roast flavor, deep, unctuous (thanks for the food vocab Tony), and tart/slow-heat with sauce.

Two small corn tortillas grilled fresh for a few minutes in front of my eyes, two tablespoons of meat, a half tablespoon of onion and cilantro, and about 2 teaspoons of sauce (red here, tomatillo-based Sunday morning. 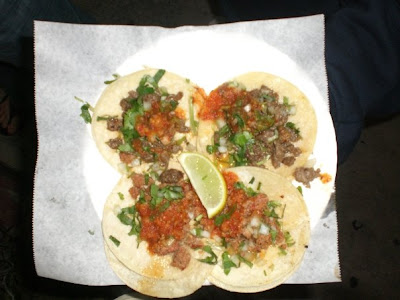 Well-sated for the evening, we tackled Space Mountain, Indiana Jones, and the Matterhorn.

The next morning we went in search of a diner. Couldn't find the one a Google search produced, but we found Billy Boy's.The parking lot was packed.

This was the taco gods smiling upon me.

That's because the parking lot at the strip mall across the street was not full, and there was, of course, a taqueria. 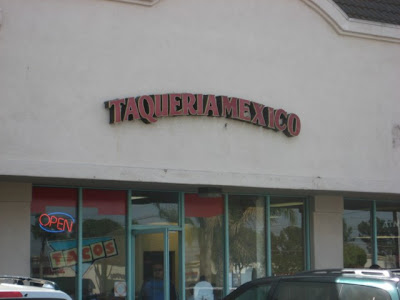 The ladies were not interested, so they went to get in line at Billy Boy's. Chris, Karl and I felt hobbit-ish, and determined to get a 'first-breakfast.'

Mine was a pollo and a beef tongue. I LOVE this stuff.

The tongue was delicious. I only knew it was tongue because I ordered it. Had someone else put it in front of me and said "This is beef," I would have believed them and thought, "Ah, that's a great spice rub/marinate." There was just a depth of flavor, a tang if you will, to the tongue. It was tender, juicy, again with the unctuous, and the perfect first breakfast to get me back across the street to Billy Boy's and the carne asada omelet that awaited me. 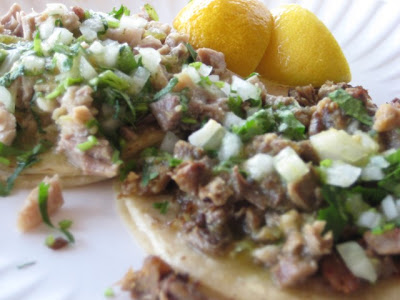 So, CD, I am so sorry I didn't get far enough north to see you, and I owe you a visit. But I hope you're proud that four years later I still remember driving to Boston in a snowstorm and talking about your need to get back to California so you could eat a 'real burrito.

Posted by redneck muppet at 1:40 PM