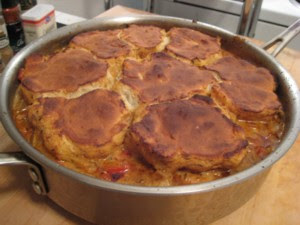 Two recipes from one magazine in one week? That's unheard of man. You don't actually COOK the recipes in those magazines. They're just for show right?

I mean, it's not like you can just read a recipe, think it sounds good, go to the store, buy groceries, go home and cook the damn thing.

Especially if you're not cooking for other people. I mean, no self-respecting cook-blogger would just make a meal for themselves and NOT call over the gang.

Heh. You, dear reader, have caught me in a blatant lie.

You can do all of those things and more. You can forget to put the butter in the biscuit dumpling batter (which didn't appear to matter in the end).

You can not realize the paprika can on your counter is really empty and useless. 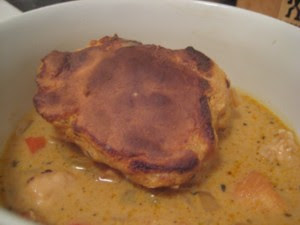 But then substitute equal parts cumin and chilli powder (with a dash of cayenne added in) to get a smoky approximation.

All (well, most) snark aside, this was the first recipe I wanted to cook from the March 2008 Food & Wine, and the second one I got around to cooking. It appealed to me on several levels. First, it's friggin' biscuits. I've been talking about starting to make biscuits for months. This seemed to be (and was) a very forgiving way to get 'er done.

Second, it's goulash. I love the word goulash and all the soupy, spicy, creamy, paprika and caraway goodness that word entails. I loved my ten days in Budapest wandering along the banks of the Danube, strolling through markets finally having wares to sell in the mid-1990s. The coolness of the sour cream served with the goulash and the warmth of the people who took me into their home and provided me with a simple, wonderful, traditional meal simply because doing so was what people did for kids of friends.

The recipe is simple and tasty. I deviated as mentioned above, and by using chicken breast as opposed to chicken thighs.

Aren't Hungarians awesome?? I never had anything that like this when I was over there, but it looks wonderful!