This is not a post about cooking. But it is about food, and memory, and taste all wrapped up together in nostalgia. This is where Bourdain has an epiphany in the wild and says "there really is a quiet place in the hills where I can get blind on the hooch in a world from the past" and we all nod sagely that he has spoken the truth. Only my story is more corny, and hokey, and downright syrupy sweet.

I've been wanting to write this since I came back to town from a trip a month ago and stopped at the Amish Bulk Foods store at the outlets in Flatwoods. I picked up some great food there, and have put some of the cheese to amazing use. But the real fun for me happened as soon as I walked in the door of the store.

I walked in the side entrance and was staring at a six-pack of Old Pennsylvania Dutch Birch Beer. 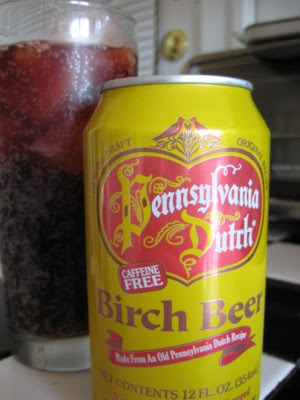 It was one of those time-waiting moments when you have a rush of memory come over you because of a sight, a sound, a smell, a feel, or a taste. And for me, it was all of them.

It was the long drive from West Virginia to Grasonville on the Eastern Shore of Maryland. For most of my childhood it was U.S. 48 to Baltimore before they opened I-68 in August of 1992, Route 2 (Ritchie Highway) from Baltimore down to Annapolis and the Bay Bridge, and the Friendly's for dinner and a Reese's Pieces Sunday, the low draw bridge at the Kent Narrows, the Fisherman's Inn before the Red Eye Dock Bar and it's muscle-man power boats was built, the Narrows if Dad was feeling 'nice-dinner after sailing before long drive home.'

I can close my eyes and tell you how to get to the restroom or the video games at the old Ebb Tide on Kent Island. I can show you how to crack a Maryland Blue crab with a knife, a mallet, and mostly your hands. I can have a conversation about the 'mustard' in the crab and how at 10 it is clearly not a delicacy, but at 31 it might be.

And I can tell you about the color and the smell and the flavor of Birch Beer. It's dark like a cola, and ruby in the light like nothing else. It's sweet like a root beer and tangy like a slow-cousin to a ginger beer.

When Mom and Dad had Hieneken or some domestic can with their dinner, it was the soda that I had.

I can still feel the wind of 5 knots when we forgot about the engine and the slow doldrums of the Virginia Bay down near Tangier when the only thing to count is how many green flies you had swatted in a competition with your sister.

And I can always remember praying that we only bought dinner for the boat for one night. That meant a restaurant for the second night of the trip. And it might mean a Birch Beer.

Posted by redneck muppet at 2:47 PM

Email ThisBlogThis!Share to TwitterShare to FacebookShare to Pinterest
Labels: about me, drinks

Being born and raised in Pennsylvania Dutch country, it warms my heart to know someone else has an affinity for the deliciousness that is birch beer! For unabashedly promoting the wonders of PA Dutch food, you have deemed yourself worthy of my mom's Snitz and Knepp recipe :)

Aww, what a great entry, and gorgeously well-described. They used to sell birch beer at the Lair, I loved going there after school to get one when I was in high-school.

i honestly stopped dead in my tracks when i walked into the store and saw it. it really is one of the more powerful food memory/association with time and place thoughts i have.