Cause that's what went through my head last night. Pure bacon. No carbonara (next time Stef), no bourbon (sorry Stephanie). 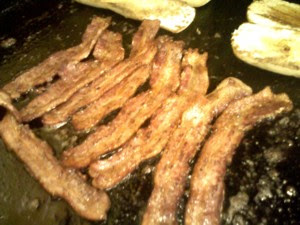 Sorry there aren't more pictures after this. The bacon was gone too quickly. DT, Belcher, Adam, Hardy, Bob, Marcus, Trish, Red, and K all split a piece per pair. PG and Chubs got their own.

Sinese got a piece too. Lucky bastard. I walked across the street with the last three pieces for PG and I, and there he was sitting at the end of the bar.

"You are the luckiest man on the planet tonight"

"Ok...damn {head slightly cocked to the left in amazement}, that IS good."

Got a text from PG a few minutes later with a similar sentiment. I reminded him there were eleven more months of this.

So. The bacon? How was it really? Ok.

It was Hudson Valley Smokehose Country Style Bacon. And it was country style bacon. There weren't flavors other than pork and salt (and there was plenty of each). I cooked it on a grill top, so the pieces held shape. It was on the grill for about 10-12 minutes total time on the cooler side.

The fat rendered off nicely and left a firm but chewy texture. It was about where you want GOOD calamari to be, not rubbery at all, but you had to use your teeth. There was no gumming this wonderland of bacon.

It was a plain flavor, but don't let that lead you to believe it was ordinary. It was just bacon, in the best possible meaning of the word. It was the perfectly raised pig, the perfect salt, the perfect cure, and I want another perfect pound of it.

This is the bacon for Sunday brunch and wrapping seafood. It's not going to mess with other things on your plate, it's just going to make them better. This would have been an amazing Club Sandwich bacon (unless you're a must have crispy bacon person, and then not so much).

Next time, I pull two slices out of the pack and freeze them. That happens for 5 more months, and then I do a comparison between five months. I'll do that again at the end of the year. Unless I forget. But my sister suggested it, and she's gourment-tacular.

My day today will be a little less bright, because there's a little less bacon to put in my belly. But I'll make it. Hell, it's February. A short month. And it's almost over. There's more bacon coming soon!

Posted by redneck muppet at 8:11 AM

you will be a bacon mavon by end of year...