I need to just tell you the menu on this one. Suffice it to say story-wise that some friends of mine asked me to cook a full dinner party for them after hearing about Iron Chef South Charleston.

I came over with four grocery bags, my apron, and a killer menu.

I started with some crostini/bruschetta. Half were topped with baby portobellos and shallots sauteed in butter, olive oil, and garlic. I half-baked the bread and then topped and finished in the oven. The other half were topped with extra stuffing from the main course. On to that in a sec.

We then took a detour from kitchengeeking to have a soup course the host had already prepared. It was a creamy roasted eggplant soup with goat cheese crumbles, and I WILL get the recipe. It's from the sister of one of the other dinner guests.

Soup was slurped quickly by all and then we sat down to a main course of bone-in pork chops stuffed with 3T or so of a mixture of cream cheese, crab, jalapeno, spinach, and dried apricot. Each shop was stuffed, seared, and then finished off in a 375 degree oven and placed on a lake of black cherry balsamic reduction.

The stuffing was one large tub of cream cheese, one cup of lump crab meat, 1/4 cup diced, dried apricot, 1 cup chopped fresh spinach, one seeded (but not stemmed) jalapeno, and salt/pepper.

The reduction was a can of sweet pie filling cherries in syrup, drained but not rinsed, 2/3 cup of balsamic vinegar, 2T sugar, 1t salt, 1t black pepper, and a whir in the processor/blender. Then onto the heat to reduce by half.

On top of it all was a shredded carrot, mint, and currant salad I found at Serious Eats.

The odd looking gizmos on the side of the plate were supposed to be Hasselback potatoes and I over boiled them in the parboil phase of things. Not a crisis. They weren't fancy fans of potato, but they were crispy, roast potatoes with ginger powder and black pepper crust and they did an admirable job of sopping up any and all reduction that slipped out from under the chops. 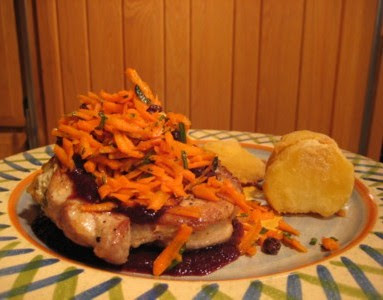 Posted by redneck muppet at 6:53 PM