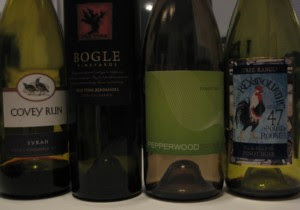 Just to set the mood. You know, because at the beginning of the day these bottles were minding their own business, corks were sitting under shiny wrapper-stuff, oxygenation was not happening. But of course, there were six people at my apartment, and we were there all day eating and watching football. And some wine was consumed. I want y'all to know that no one drove after consuming too much wine, and that we were not each reaching for our own bottle. This was a 6 hour smorgashboard of Sunday.

It was, as DT and T both said, the best Sunday ever.

Of course, there may have been better Sundays in the past, and each of us may have a better Sunday exactly seven days from today. But for us, those lucky few who made it to my apartment (I was kinda there already), it was a Sunday that was perfect for mind, body, and soul.

I got to cook. A lot. Large pot of Moosewood's Middle-Eastern Chick Peas with Spinach over orzo. A triple batch of Martha Stewart's Lamb Kofta, and a heaping dollop of lemon/mint/garlic yoghurt sauce. 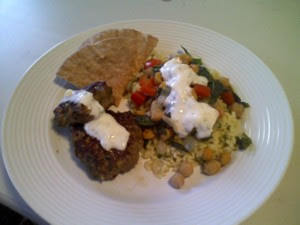 I'll give you the recipe for the chick peas if you want. Pretty simply with onion, red pepper, cumin, coriander, chick peas, and spinach. You can get there in your mind if you work at it. You want measurements? Drop me an e-mail.

I really loved the kofta. It was a spice explosion with lamb. Can't beat that. Coriander, cumin, paprika, nutmeg, clove, cayenne, cinnamon. Damn. It blended so well together. And I hit the cooking time perfectly. Juicy, tender lamb with exotic, non-chain spices? AND pita? C'mon, it was heaven. Managed to get amazingly fresh flat-leaf parsley AND toast the pine nuts without burning more than three of four too.

We all loaded up our plates and grazed through the day. Later on there was espresso (Lavazza of course), homemade hot chocolate (from Chez's sister's x-mas gift to me), and wine as we checked out the new Terminator series, and laughed hysterically through Family Guy and American Dad.

DT went and picked up ice cream early on, so there was dessert too. Haagen Daas Triple Chocolate and Eddy's Samoa. That's right. There's Girl Scout Cookie ice cream. Chez screamed (literally) when DT pulled it out of the bag. We all just grabbed spoons and started passing cartons of ice cream around.

Neither DT nor T had to be at work today. I got to spend 3+ hours in the kitchen and make people happy. J got a nice dinner before heading in to the office. Chez got some couch time.

If perfect exists, today was it.

so so nice! sounds truly wonderful. the day and the food. i love love love alla that.